Rising power of the knowledge commons 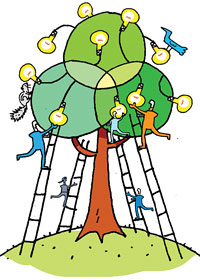 How many of the Einsteins who exist now will be allowed to learn physics? That is the question Eben Moglen, professor of law and legal history at Columbia University, threw at a selected audience in Delhi last month.

And the answer he provided—none, perhaps—did not occasion much surprise. Those attending the conference on software and patents were familiar with Moglen’s ideas on the restrictive nature of intellectual property, but his speech on the concept of the knowledge commons as a rising force has led to some heated debate. Is he an impractical visionary or a sage who can sense the big change?

Moglen is, apart from being a brilliant legal historian, the founder and chairman of the Software Freedom Law Center (SFLC), which provides legal services to protect and advance free and open source software. As the messiah of this faith, he represents many of the best known free and open source projects, and has taken on some of the big names of the software industry who have transgressed. Moglen’s theme at the September conclave had a larger canvas than just software. His thesis is that the knowledge commons, which is already shaping the way we produce and distribute goods in the digital universe, could become a potent force in the real world too. He believes we are just “one step away from the power of the commons” and the only block is the concept of ownership.

What exactly is the knowledge commons? It is looking at knowledge as a shared resource, a system that facilitates communication and collaboration among professionals and the ordinary people in diverse ways. In the digital world this has helped revolutionise the creation of software and is increasingly transforming the contours of production and distribution elsewhere, a good example being the music industry. The older commons was in the physical world—the common grazing land, water bodies and forests that everyone shared. But with the development of private property, these were enclosed by the powerful land-owning elites.Moglen wants to ensure that this does not happen again.

The most important common resource that mankind shares now is its collective brain power, and this should be harnessed to change the course of human history. The main reason the older system of property or ownership succeeded was that the human brain was thrown away. “The great victory of ownership arises not only from the reduction of commons to property from enclosure, it capitalises on the inevitable existence of ignorance,” he says.

So what is he suggesting? “The great commons of human existence is the commons created by the uniqueness of the human communicative capacity. We can think, and we can communicate our abstract thoughts to one another, and we can modify, and share, and remix, and reuse thought.” In short, he hopes to change the course of human history. If you are familiar with Moglen’s thoughts, all this should come as no surprise. This lethal demolisher of conventional wisdom on intellectual property has a simple campaign: abolish the ownership of ideas, allow knowledge to circulate freely and restore culture as the symbolic commons that all people share. His key point is that although all problems cannot be solved in the community-based production of the digital world, the 21st century political economy is different from the past because now we have some goods that have zero marginal cost. For instance, reproduction of knowledge. By ensuring that it remains free of ownership we can produce the equivalent of what the unlocking of resources did for the capital-funded, ownership economy 200 years ago—but by the reverse process.

The idea is to bring all brains online to create a powerful network of intelligence that will work for the survival of the human race. In case we have forgotten, one of the worst enclosures is the global environmental commons which continues to suffer from the emissions of the capital-intensive economies of the developed world. “In every sphere ownership has had a bad impact, and climate change is one of them.”

Moglen’s idea of “educating every brain” to create new ideas and new approaches to solve the problems of the human race may appear to be visionary, idealistic and, perhaps, impractical. To some they come across as far too revolutionary, prompting one of his listeners to describe him “as a crazy lawyer from America who sounds dangerously like a communist”. If sharing of common resources is seen as a communist philosophy then Moglen is probably one. As he told this writer on a previous occasion, advocates of freedom in the new digital society have been termed pirates, anarchists, and communists. But those who fix such labels, he retorts, are “thieves in power, whose talk of intellectual property is nothing more than an attempt to retain unjustifiable privileges in a society that is changing irrevocably”.