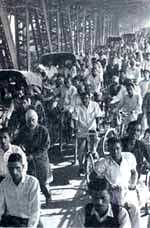 Modern civilization appears to have it all wrong. The yardstick used to measure the progress of a town, city or village is the status of its physical development. More shops, busier bazaars and crowded roads are taken to be signs of prosperity. There's little or no laying out of well-planned cities with ample space for each activity. With bazars, business centres, schools, colleges, offices, industries growing and overstepping each other's boundaries, "developed" towns have taken on a look of utter chaos.

New colonies have been granted almost carte blanche permission to develop sites bordering main roads. To cater to them, hawkers and petty shopkeepers have settled on footpaths, more often than not encroaching on the parenting roads. A familiar sight in "developed" towns are burgeoning scooter and car repair garages. While they occupy both shop and footpath space, the vehicles they service are parked on the curbs of the main roads.

With consumerism booming, road traffic is bound to increase. As things stand, Delhi is estimated to have more vehicles than all the other metropolises in the country put together. In 1947 in Hanover, Germany, city engineers had suggested that roads be widened to 120 feet (37 metres). The knew that with the war over, industrialisation would commence with a vengeance, which could lead to mayhem on the roads. Today, Hanover is considered one of the best developed cities in the world.

Delhi's development authorities first allowed schools and colleges to sprout edging the main roads, then built speedbreakers near the schools. It has become a routine affair for the road authorities to sculpt speedbreakers on main roads, flouting all convention and commonsense. In Uttar Pradesh, the government had thoughtfully put up clearly marked notice boards that forbade people from constructing any house or shop, authorised or unauthorised, within 100 feet of either side of the road. Till 5 years ago, these boards, although seriously mutilated, were at least visible. But thanks to enterprising shopkeepers and crooked officials, these notice boards have all but disappeared, and numerous unauthorised structures have cropped up in their place.

With every authorised colony saddled with its own little cluster of unauthorised structures, it's not just roads that are blocked. Sometimes, even the drainage system chokes on its own gunk. While constructed drains are often covered in order to facilitate the building of surface structures, unauthorised dirt drains often spill over, adding to the general pollution.

At the rate in which towns and cities are being developed, the next decade or so will see utter clutter. Townplanners, road authorities and policymakers should give serious thought to the way the new colonies are being planned and developed.

All new colonies should be developed away from the main roads. Policymakers should carefully consider all options before approving "better alternatives". For instance, recent years have witnessed a spate of bypass roads. While the concept itself is laudable, it has been observed that it is only a matter of time before areas on both sides of the road are taken over by petty hawkers. What you have years later are roads that are probably busier than city roads. A clear case is the bypass road built around Ghaziabad. Like the one built in Roorkee years ago, this one too was welcomed by the locals; but today these bypasses cannot be distinguished from the other crowded roads in these towns.

It is only over the past half a century that bazars have spilled over on main roads. In the past, the width of roads was mandated at about 100 feet (30 metres). Marketplaces were planned with captive spaces of their own, and they had no reason to encroach on roads; the longitudinal space reserved for a market was approximately 200 feet (61 metres). Of late, however, the government has let loose the dogs of chaos, with marketplaces and roads existing cheek by jowl, and mutually unhappy too. The beginning of rampant consumerism in India could well be the death of planned cities.