Environment is never the first in the list of our priorities. It is only when disasters occur that the cause of environment becomes an issue 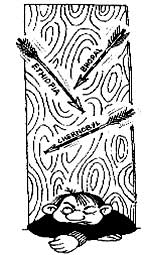 AS I write a lot of anxious people are looking at the New York stock market for unhealthy signs; a crash actually, since America's financial wealth appears to have increased by more than the entire annual output of Germany in less than two years. Not being an owner of investments, I am not racked by the personal dilemma of whether to sell or not to sell. But I am impelled to ask once again whether the environment movement will survive another world economic downturn.

For me the question is more than idle speculation because I was a close witness to the two previous economic crunches which came at very unfortunate times professionally and turned me into an environmental pessimist. Perhaps if one lives long enough, terminal pessimism is unavoidable but the first, the 1973-74 oil shock, was particularly badly timed for the environment. Cheap (US $2 per barrel) energy was no longer available in the aftermath of the Arab-Israel conflict of October 1973. It was the time the Organization of Petroleum Exporting Countries managed to hoist the price of oil to undreamed of heights. Industrialised countries refused to pass the rise to consumers, imports were restricted, inflation and unemployment rose and governments cut back. What was the softest, easiest target for cutting? The foreign aid bill, of course; and the new un Environment Programme, launched after the un Stockholm Conference in 1972, which had hardly started before receiving a body blow.

It had been decided to base the new secretariat in Nairobi and, bowing to the pressure to put a new headquarters in the Third World, the donor countries decided to accept the higher costs in travel and communications. But the oil shock changed all that. It caused some countries like Switzerland to go as far as to ban private cars from the roads for several Sundays to keep down oil imports. But, at least, the energy crisis testified to the possibility that resources might not be unlimited after all. Until the notorious study, Limits to Growth, introduced the idea at Stockholm, such a notion had not been taken seriously anywhere.

I lived in a sort of psychological dugout producing a save-the-world monthly newspaper for the un and was regularly attacked for running environment stories. The slogan from all sides was, "We don't want environment, we want more development." Environment started to have a hard time and the hope of the late '60s began to fade.

However, there were certain incidents which turned the cause of environment into something more worthwhile. The first was the Ethiopian famine. It was not the first famine in that part of the world but it was the first to be reported on tv with such immediacy, and the first to be ascribed to human-made environmental factors. That was, in fact highly arguable, (the war going on was an important factor) but it was the environmentalists who put their label on first. After that nobody disagreed as pop stars like Bob Geldof charmed money out of Western television audiences in order to do something immediate for helpless people.

Bhopal brought to horrified world attention the industrial environmental risks threatening surrounding populations. It was not a slow poisonous seepage, but something that went bang in the middle of the night and caused death by poison gassing of hundreds of poor and unknowing people and dreadful injury to thousands. Then Chernobyl also went bang in the middle of the night, but in high-tech style. The fact that the Russians sat on the news until found out by the Swedes merely meant the publicity was all the more frenetic.

Those three or four disasters saved the environmental cause at that time and allowed the work of the Brundtland Commission to be received by the world community with gratitude rather than irritation. But one must ask whether an apparent world change of mood resulting from a chain of chance events amounts to real encouragement? I never ceased to speculate what might have happened to the Brundtland Commission's work which launched 'sustainable development' on the diplomatic stage and into the Rio Conference, if it had just been released to a sceptical world tired of foreign aid, new economic orders and environmental scare stories about disappearing species and pollution.

Environmental awareness is not the only human enterprise to make progress by recovering from disasters. But environmental disasters are different in that they are often irreversible and show up too late in some process that unrolls with great momentum. If there is to be another world economic downturn then the temptation yet again to regard the pursuit of environmental awareness as an expensive inconvenience may be as big a disaster as anything a collapsing stock market can deliver.