Flood is a recurring threat to the sustainability of open defecation free status in Bihar. Unique toilets, built on elevation, can show the way ahead 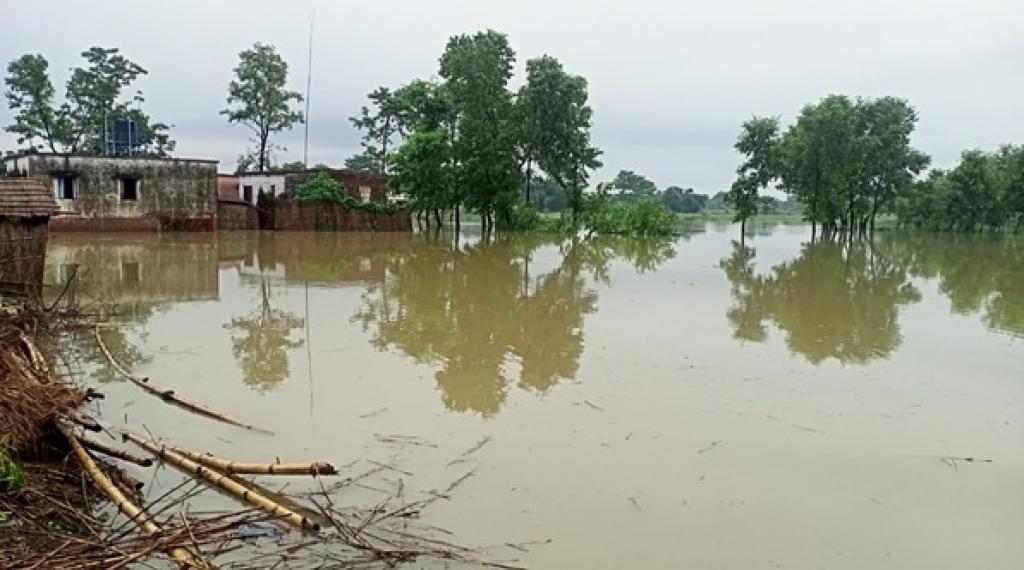 The Bihar deluge is here again: Water levels in several rivers have risen dangerously and breached embankments at many places. North Bihar is the worst threatened by floods in the state.

North Bihar has a population density of 1,294 persons per square kilometre and a population of 65.54 million (as against 103.80 million for the entire state). The state has 15 extreme flood-prone districts: Darbhanga, East Champaran, Katihar, Khagaria, Madepura, Madhubani, Bhagalpur, Muzaffarpur, Saharsa, Samastipur, Shoehar, Sitamarhi, Supaul, Vaishali and Begusarai, according to the Water Resources Department (WRD), Bihar government.

At least 28 of the state's 38 districts are flood-prone. It will not be, hence, erroneous to say that almost the whole of north Bihar is prone to floods.

The natural flood plains of rivers have undergone a transformation due to a dominant flood-control mechanism adopted by the state. This has impacted and transformed the flood landscape, the intensity and pattern and created a ‘false sense of security’ among people.

Figures relating to the impact of floods by the Disaster Management Department, Bihar government, corroborate the same. Between 2000 and 2018, 144.01 million people (approximately 28 million households) were affected by floods across 24,670 panchayats.

As of July 24, 2020, a total of 0.96 million people (approximately 0.19 million households) in 122 panchayats had been affected during the 2020 floods in north Bihar. The affected people / households and the panchayats indicate the possible extent of devastation to the infrastructure and basic amenities such as toilets, drinking water, individual houses, etc.

However, those living on the riverside think otherwise. According to them, the riverside is a perpetual flood-affected area and is always at risk. Because the habitations in the countryside are protected by embankments and are relatively flood-free, those from the riverside consider others as within the embankment.

This differing perception from the vantage point of inhabitants defines the local interpretation of being protected from floods.

On the other hand, habitants in the countryside fear embankments breaching; in the past, breach-induced floods have proven to have a long-lasting impact on the habitations.

Damages to properties — in the riverside and countryside — have been reported during floods. It, thereby, becomes critical to incorporate safety measures while executing any development plan in the flood-prone region of north Bihar.

The collaborative efforts of Swachh Bharat Mission (Gramin) (SBM[G]) and Lohiya Swachh Bihar Abhiyan (LSBA) led to the construction of 16.77 million toilets in Bihar, of which 11.29 million were constructed in 22 flood-prone districts of north Bihar.

At least 7.85 million toilets were constructed in the 15 extreme flood-prone districts at an estimated cost of Rs 94, 205 million.

Irrespective of the ecological and hydrogeological variations, flood typologies, location of habitations and floodscapes, the most preferred technology for toilet construction was the twin-leach pit and septic tank.

Flood is a recurring threat to the sustainability of open defecation free (ODF) status in Bihar. It is important to factor in the disaster as an impediment and set sanitation in a context. Recurring floods pose a threat to toilet structures and prevent access in difficult times.

Along with floods, the importance to ecological sustainability of sanitation facilities must also be attached for total reduction in contamination of soil, surface water or ground water.

The most recent floods have iterated the need for re-strategising sanitation works to ensure sustenance of facilities and its ecological symmetry across the flood typologies of north Bihar.

Naya Tola Bishambharpur is a hamlet with 108 households, located within the Gandak embankment in Bhagwanpur panchayat, Nautan block of East Champaran district. Its residents moved at least nine times 30 years ago due to erosion by the changing course of the Gandak.

To the north of Naya Tola Bishambharpur, about 175 kilometres, is the Gandak barrage in Valmikinagar. To its east is the Pipra-Piprasi embankment.

One hamlet is situated on an old embankment. It is 20-25 years old, and the residents moved here from Bhagwanpur village after being displaced by the flooding river. This hamlet is now permanently located on the government land of the old embankment. Administratively, Naya Tola Bishambharpur hamlet is in ward number four, Bhagwanpur panchayat. 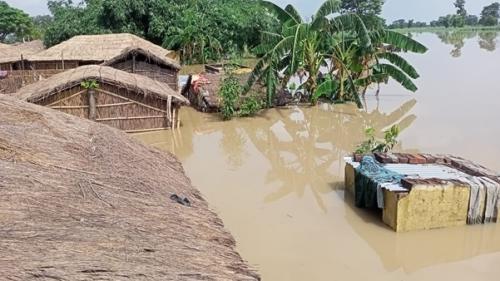 The eastern embankment of Gandak is also known as Pipra-Piprasi embankment; it originates from Bagha II block, cuts through Nautan block and continues towards Purbi Champaran. A new road is being constructed from Mangalpur bazaar (one km east of Naya Tola Bishambharpur), perpendicular to the flow of Gandak connecting Bettiah to Gopalganj.

Two bridges are being constructed on this road (south of Naya Tola Bishambharpur) at Tengrahi ghat and Jadhopur Gopalganj.

Naya Tola Bishambharpur comprises multiple caste groups: Musahar, Harijan, Been, Barai, Mallah, Yadav and Rajput. The families were displaced from their original land by the Gandak’s erosion and rehabilitated themselves on an old embankment to form the present settlement.

By virtue of its riverside location, the hamlet is highly prone to annual riverine floods. In August 2017, the community witnessed the worst flood in the past 25 years and was forced to evacuate to higher ground after the flood waters up to three feet entered homes.

This year too, the village was inundated by river Gandak and residents were shifted to the Pipra-Piprasi embankment.

During the first round of floods in Naya Tola Bhishambharpur, all the twin leach pit toilets constructed under SBM(G), the central government’s flagship programme of sanitation, went under water. Gandak’s water, after crossing the agricultural land to its east, entered the village. 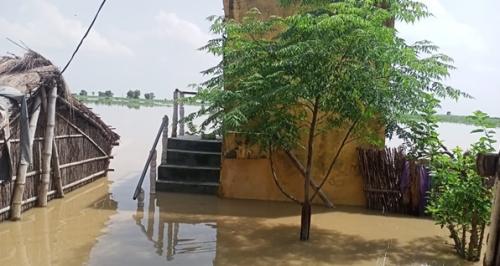 According to villagers, the toilets became inaccessible the moment the river water entered the village. In the beginning, the flood waters submerged both the squatting pan and the twin leach pit and inundated the super structure. Many toilets were engulfed during the initial phase of the floods because they were constructed in a relatively low-lying area.

Many of the first-time users were clueless about the extent of damage the floods caused to their respective toilets. With support from LSBA and the HI-AWARE programme of International Centre for Integrated Mountain Development (ICIMOD), Megh Pyne Abhiyan was able to develop flood-resilient and ecologically sustainable sanitation. These units are called phaydemand shauchalay (PS) or EcoSan toilets.

ICIMOD is an intergovernmental knowledge and learning centre working on behalf of the people of the Hindu Kush Himalaya (HKH). Megh Pyne Abhiyan is a non-profit that works to make pure water available to all.

These comprise a sanitation technology that can be adapted for different geographical terrains, whether flood-prone or water-scarce regions, with different groundwater regimes.

The basic design feature is that urine and faeces do not mix. The toilet’s structure comprises two chambers for collecting excreta, and there are separate outlets for urine and back wash. Moreover, ash or crushed dry neem leaves or rice husk is put into the excreta chamber after use, which helps kill the pathogens.

After six-eight months (depending upon the season), the faeces decompose and are used in agricultural fields as humanure. So is urine, though directly, but only after the dilution (in 1:5 or 1:7 urine-water ratio) as a substitute for urea. Urine contains nitrogen, potassium and phosphorous essential for plant growth.

Phaydemand shauchalay follows above-ground excreta management and has a sustained use before, during and after floods. In addition, the disposal of excreta in soils and water is completely stopped, thereby helping in source (groundwater and surface water) protection. Faecal management happens in the sanitation unit itself, eliminating the need for other structures for sewage treatment.

Different design models are possible based on the location, land availability and financial resources. The compost or ‘humanure’ is handled by family members and is used directly in the agricultural fields and kitchen gardens.

One of the salient features of phaydemand shauchalay is that the entire facility is above ground. It comprises three structural parts: Foundation, plinth, sub-structure including faecal chambers and squatting pan (with space for back wash, faecal collection and urine diversion) and super-structure.

The location should be close to the house / kitchen garden and receive direct sunlight. In flood-prone regions, the toilet should be elevated. Similar process was followed while constructing the toilets in Naya Tola Bhishambharpur.

Once the site is identified, the construction of foundation and plinth begins. Along the required dimensions, a foundation is dug 1-1.5 feet deep. It is then compacted with brickbats, following which the plinth is raised. In flood-prone areas, the plinth level has been raised to 1-1.5 feet above the highest flood level in the last 25 years. After the construction of the foundation and plinth, it is filled with soil and compacted.

A reinforced cement concrete band is laid over the plinth to strengthen it. The substructure is built over this.

Overlaying the recurring floods with the sanitation technology is critical to meet the objectives and ultimate goal of ODF. As stated earlier, this will mean planning for sanitation sustainability, given the vulnerability to floods.