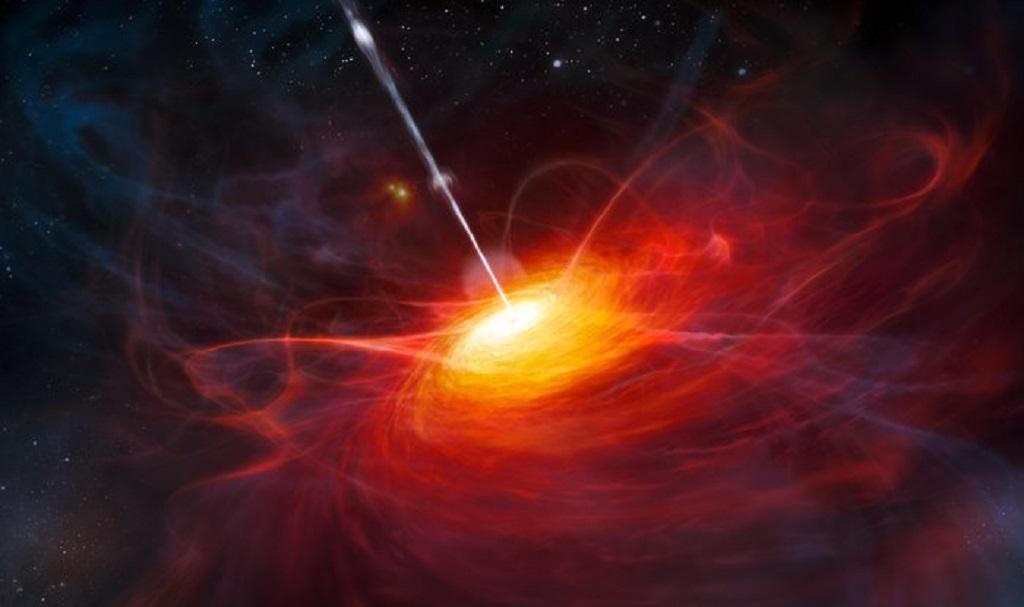 An international team of astronomers have discovered the most distant ‘radio-loud’ quasar with the help of European Southern Observatory’s Very Large Telescope (ESO’s VLT). It took 13 billion years for the quasar’s light to reach earth, according to a paper published in The Astrophysical Journal March 8, 2021.

Quasars are supermassive black holes with a very luminous disk around it. They are found in the centre of faraway giant galaxies and emit jets at radio frequencies. However, 90 per cent quasars do not emit strong radio waves, making this newly-discovered one special.

These supermassive black holes suck in the contents of the host galaxies. The luminous disk, which in some cases outshines the giant galaxy it is found in, is formed when objects spiral around the blackhole at an enormous speed right before falling into it.

This accretion disk, is thus powered by the heat and energy of matter that is swallowed by the supermassive black hole.

Moreover, this particular quasar appears to the scientists as it was when the universe was just around 780 million years old. The glowing disc around a blackhole 300 million times more massive than our Sun, thus, holds clues about the ancient star systems and astronomical bodies.

The group of scientists is studying this quasar to understand how the first massive galaxies, black holes and large-scale structures in the universe formed,
said Eduardo Banados, one of the authors of the paper. Banados, an astronomer with Max Planck Institute for Astronomy in Heidelberg, heads a group that focuses on the early universe.

"Those initial conditions have important implications for the universe we live at the present time," he said. The discovery of supermassive black holes that formed when the universe was relatively young, has raised more questions than it has answered.

"It tells us that somehow there must be a mechanism to form such incredible massive objects reaching a billion times the mass of our Sun in a very small amount of time (for cosmic scales)," Banados shared.

The findings, he added, also challenge some prevalent theories of blackhole formation and growth. "We still don't know how they were formed and finding these objects in the early Universe makes it even harder for theorists," Banados said.

The astronomers have ruled out a few theories, he shared. "For example, if you start from the death of a giant star, you'd need much more time than the age of the Universe at that time to form such a massive black hole," he said.

P172+18 is also one of the fastest accreting quasars, which means it is accumulating and consuming matter from its galaxy at a stunning rate.

Chiara Mazzucchelli, fellow at ESO in Chile, who led the discovery with Eduardo Bañados of the Max Planck Institute for Astronomy in Germany, said:

“The black hole is eating up matter very rapidly, growing in mass at one of the highest rates ever observed.”

The scientists think that the powerful radio jets shooting out of the quasar fuelled the appetite of the blackhole. “The jets are thought to be capable of disturbing the gas around the black hole, increasing the rate at which gas falls in,” a press statement from ESO explained.

"The supermassive black hole has an effect on a few parsecs (a parsec is distance of about 3.26 light years) while the galaxies are bigger than thousands of parsecsm," Bañados shared.

His team suspects the powerful jets that shoot out of these quasars — the same kind that made P172+18 observable — regulates these strong correlations between the supermassive black holes and properties of giant galaxies.

"One mechanism that the central black hole has to interact with the much larger host galaxy is via jets, which can be very large, even larger than the galaxy itself."

The team believes that more such quasars that tell stories about the ancient universe will be found, perhaps even farther away from earth.