These soldiers of science must understand that they may not have taken the Hippocratic Oath to serve patients, but their research determines the standard of medicine that ultimately reaches the ailing 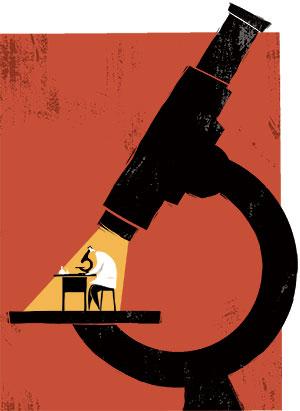 The million-dollar question that universities ask almost all PhD candidates is, “Why do you want to pursue a research career in biological sciences?” The answer almost always is, “For the betterment of science.” But is this really true? Stepping inside research laboratories and institutions, one can easily get the clear picture of this falsifiable statement.

In many cases, scientific results are often skewed for favourable outcomes. The misconduct has far-reaching consequences and ultimately it is the patient who has to pay the price. The observation is certainly not to mitigate the importance of modern science, but many of the present day maladies can be managed more easily if handled with honesty.

Scientific misconduct in research appears in three forms: falsification, fabrication and plagiarism. Falsification refers to the misrepresentation or omission of data, and manipulation of instruments, raw materials or research methods.

For instance, a certain data can be omitted from an experiment to support a particular claim or hypothesis. A research could claim a particular compound to be X, when it is actually Y. The research hides the fact to enhance its statistical significance. Disregarding contradictory findings, it selectively showcases data to reach a more favourable outcome.

Fabrication refers to the inclusion of data based on experiments that were never run. Plagiarism occurs when ideas, methods or data of someone else is presented as one’s own. These transgressions of the research community appear innocent until they are inspected at the nano level, and may occur at any stage of the research — during a PhD study, a grant application or at the time of an ongoing project.

A rational fear that researchers face is: publish or perish. Despite a stringent peer-review process that accompanies publishing and patenting, it does harbour limitations.

It also indicates that until the reproducibility of research findings is carried out, the data in hand must be looked at with a grain of salt. Considering the difficulties in completing research work with the scientific community holding a stop watch, time is a factor that needs to be appraised.

Pilot projects, for instance, from years of PhD work, tend to be scaled up to translational projects through government funding, which comes from tax payers’ money. This is done in the hope of generating a medical product that is significant for healthcare.

Independent bodies must scrutinise such projects beforehand to ascertain the claims. Integrity needs to be maintained at the lowest level during research, which must be carried out by paying a great deal of attention to detail.

The duty to ensure this lies with the principal investigator. Nevertheless, we are faced with the situation where power tends to corrupt and absolute power corrupts absolutely. Upon the act of misconduct, a cascade of events follows because false hopes are imprinted into this system. It is at this juncture where caring ceases.

Living in a consumer-driven world indicates that if there is a viable and lucrative medical product, investors would lunge at the opportunity. These industries thrive on the weak and the sick — the soft targets.

This vicious cycle of abuse must be put to an end. Members of the scientific community must instil good and ethical practices, report suspicious claims and ensure moral policing. An independent investigative body, a non-profit partner, must supervise research activities to ensure that it is conducted accurately.

There is a certain amount of trust that lies with the scientific community. These soldiers of science must take it upon themselves to understand the world the way others cannot.Those involved in the misconduct need to understand that although they may not have taken the Hippocratic Oath to serve patients, their research determines the standard of medicine that ultimately reaches the ailing.

There is no room for unethical practices. The penalty for scientific misconduct must be harsher, supervision stricter and transparency better. Each consumer of the pharmaceutical industry has the right to know what goes on in laboratories because people are not mere objects to be tried and tested.