But about half of matter in our galaxy is too dark to be detected. It takes the form of cold, dark clumps of gas, in which lies Milky Way’s missing baryonic matter 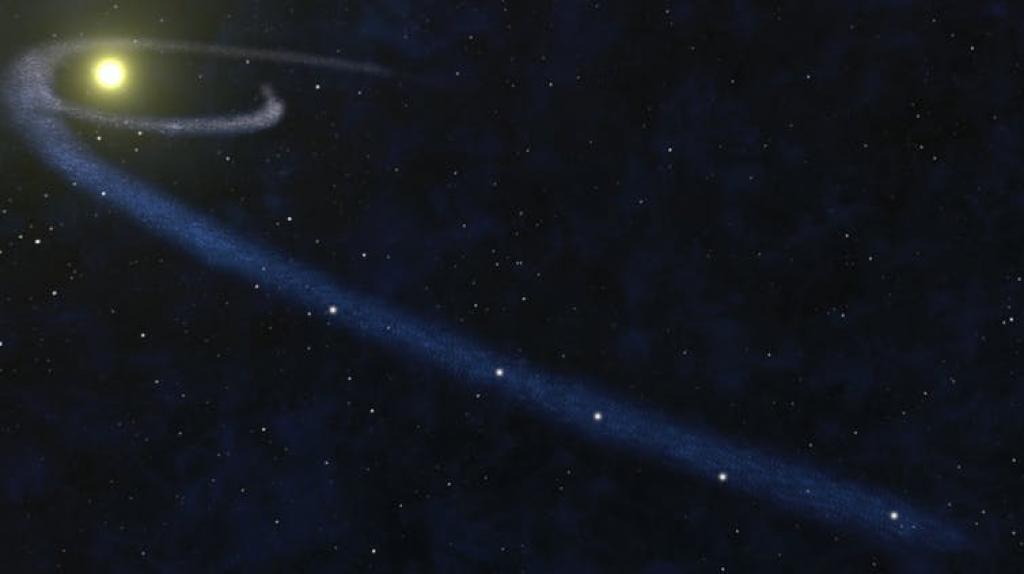 We’ve all looked up at night and admired the brightly shining stars. Beyond making a gorgeous spectacle, measuring that light helps us learn about matter in our galaxy, the Milky Way.

When astronomers add up all the ordinary matter detectable around us (such as in galaxies, stars and planets), they find only half the amount expected to exist, based on predictions. This normal matter is “baryonic”, which means it’s made up of baryon particles such as protons and neutrons.

But about half of this matter in our galaxy is too dark to be detected by even the most powerful telescopes. It takes the form of cold, dark clumps of gas. In this dark gas is the Milky Way’s “missing” baryonic matter.

In a paper published in the Monthly Notices of the Royal Astronomical Society, we detail the discovery of five twinkling far-away galaxies that point to the presence of an unusually shaped gas cloud in the Milky Way. We think this cloud may be linked to the missing matter.

Finding what we can’t see

Stars twinkle because of turbulence in our atmosphere. When their light reaches Earth, it gets bent as it bounces through different layers of the atmosphere.

Rarely, galaxies can twinkle too, due to the turbulence of gas in the Milky Way. We see this twinkling because of the luminous cores of distant galaxies named “quasars”.

Astronomers can use quasars a bit like backlights, to reveal the presence of clumps of gas around us that would otherwise be impossible to see. The challenge, however, is that it is very rare to catch quasars twinkling.

This is where the Australian Square Kilometre Array Pathfinder (ASKAP) comes in. This highly sensitive telescope can view an area about the size of the Southern Cross and detect tens of thousands of distant galaxies, including quasars, in a single observation.

Using ASKAP, we looked at the same patch of sky seven times. Of the 30,000 galaxies we could see, six were twinkling strongly. Surprisingly, five of these were arranged in a long, thin straight line.

Analysis showed we’d captured an invisible clump of gas between us and the galaxies. As light from the galaxies passed through the gas cloud, they appeared to twinkle.

At the centre is one of the strongly twinkling galaxies. The colours represent brightness, as it fluctuates between shining brightly (red) and more faintly (blue).

A clump of gas ten light years away

The cloud of gas we detected was inside the Milky Way, about ten light years away from Earth. For reference, one light year is 9.7 trillion kilometres.

That means light from those twinkling galaxies travelled billions of light years towards Earth, only to be disrupted by the cloud during the last ten years of its journey.

By observing the sky positions of not just the five twinkling galaxies, but also tens of thousands of non-twinkling ones, we were able to draw a boundary around the gas cloud.

We found it was very straight, the same length as four Moons side-by-side, and only two “arcminutes” in width. This is so thin it’s the equivalent of looking at a strand of hair held at arm’s length.

This is the first time astronomers have been able to calculate the geometry and physical properties of a gas cloud in this way. But where did it come from? And what gave it such an unusual shape?

It’s freezing out there

Astronomers have predicted that when a star passes too close to a black hole, the extreme forces from the black hole will pull it apart, resulting in a long, thin gas stream.

But there are no massive black holes near that cloud of gas — the closest one we know about is more than 1,000 light years from Earth.

So we propose another theory: that a hydrogen “snow cloud” was disrupted and stretched out by gravitational forces from a nearby star, turning into a long thin gas cloud.

Snow clouds have only been studied as theoretical possibilities and are almost impossible to detect. But they would be so cold that droplets of hydrogen gas within them could freeze solid.

Some astronomers believe snow clouds make up part of the missing matter in the Milky Way.

It’s incredibly exciting for us to have measured an invisible clump of gas in such detail, using the ASKAP telescope. In the future we plan to repeat our experiment on a much larger scale and hopefully create a “cloud map” of the Milky Way.

We’ll then be able to work out how many other gas clouds are out there, how they’re distributed and what role they might have played in the evolution of the Milky Way.

Read more: Half the matter in the universe was missing – we found it hiding in the cosmos