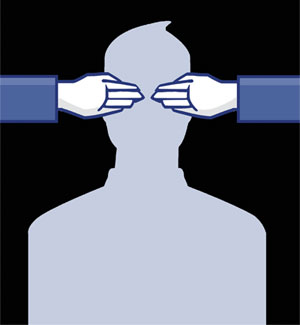 It may not be a hyperbole to suggest that the Jawaharlal Nehru University (JNU) students who were recently charged with sedition for allegedly raising anti-national slogans were done in by the Janus-faced social media. Ten years ago, the incident would have at most stirred minor ripples. But in today’s times, when we are all dunked in the digital soup, to ignore the sinister tentacles of the ever-widening social web is to court danger, as the students discovered much to their horror.

The JNU cause celebre had echoes of a similar incident that took place in the US last year when conspiracy theorists interpreted a regular military exercise as Obama’s attempt to declare martial law. Footage of tanks rolling down the streets went viral, triggering knee-jerk reflexes; The New York Times described it as “traversing the outer edges of paranoia”.

It’s not as though mass scares didn’t happen in pre-modern times. Before the advent of radio, rumour was the arch weapon of mass (dis)information. The advent of mass communications has only expanded the rumour footprint (remember the fictitious monkey man that gripped Delhi’s imagination in 2001?). But it is the coming together of Internet, social media and the traditional mass media that has created an information-transmitting behemoth capable of both good and evil. As we saw in the case of the JNU episode, it is not easy to tell a lie from a falsehood on the social network. Besides, the hydra-headed nature of the social web allows rumours or misinformation to infect far more minds with greater precision and at a much quicker pace. Little wonder then it is an ideal vehicle for anyone—radical outfits like ISIS, political parties or corporations—in the business of peddling ideas and products.

A recent article in the New Scientist mentions some of the technologies of propaganda currently at work. One, called majority illusion, creates the false impression that the opinion of a famous or influential person, broadcast via Twitter or Facebook, is shared by most people. Another, called astroturfing, and often abused by politicians and advertisers, is used to promote a particular opinion by fabricating strong likes or dislikes, such as on Facebook. Yet another is called disinformation in which someone—say a political party or a start-up firm—deliberately plants spurious data or tales in cyberspace for the sake of political or monetary profit..

David Schneier, a respected internet security specialist, fears governments and corporations are covertly using the Internet to carry out perhaps the biggest-ever mind-control lab. He believes “we’re entering an era of unprecedented psychological manipulation”. Many Internet scholars agree these dirty tricks are undermining democracy. But how does one get around them? Is it possible to create an equivalent of the Maxwell’s Demon, which can sift the bogus from the genuine? Or are we to assume that given so many versions of reality floating, the social web increasingly appears like a setting of the classic Japanese movie Rashomon, where many contradictory versions of a truth are vying for attention? For instance, in the information war between the Right and Left in the wake of the JNU incident, truth became a chimera. Researchers at the IMT Institute for Advanced Studies in Lucca, Italy, who were exploring how conspiracy theories spread on the social media, found people generally tend to trash information that doesn’t agree with their ideology, whereas the rest is widely shared resulting in what in psychology is called confirmation bias. Regardless of whether people choose to believe in convenient truths or falsehoods, we must call the bluff on lies such as the apparently-doctored footage used as evidence to book JNU students.

But the bigger question is: who should we trust for telling us what’s true and what isn’t? We can’t trust the state, as it is perhaps the greatest propaganda-monger. And tech giants have been known to buckle under state pressure when it comes to banning sites or deleting information it cannot stomach. Even so, as more and more people rely on the Internet and social media for information, we can no longer duck the question.