DNA as history and sophistry 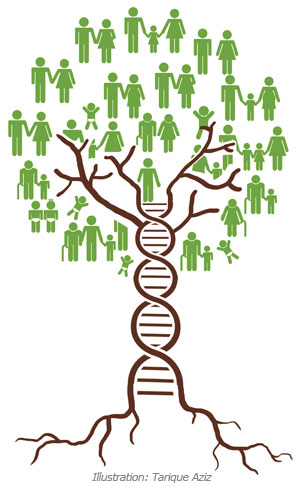 The first Jewish settlers in India arrived about 1,500 years ago from West Asia. Over time, as they married and mixed into the local populations, their original pedigree got progressively diluted and was dyed deeply in the South Asian hue, says a team of geneticists who compared the genetic layout of contemporary Indian Jews with native Indians as well as of Jews living in West Asia.

This is no groundbreaking news. The finding is more or less in line with what conventional historians have long suspected, based albeit on flimsy evidence. What is new, however, is that now there is scientific evidence backing this claim. Researchers at the Hyderabad-based Centre for Cellular & Molecular Biology (CCMB) used clues called genetic markers (essentially spelling differences between any two DNAs) to reconstruct a genetic history of the Indian Jews. The study, published recently in Scientific Reports, found that while markers on chromosome Y, which is passed on from father to son, and mitochondrial DNA, which is inherited only from the mother, linked them tenuously to one another through their West Asian origins. However, markers on other chromosomes, which carry the full genetic blueprint, suggest deep roots in the south Asian stock.

Scientists are increasingly using genetic history to illumine the dark corners of humans’ shared past, which a traditional historian could only interpret vaguely using remnants of ambiguous or unreliable oral, written or archaeological data. Even as genetic histories fill crucial gaps in traditional historical accounts, they are, as Princeton science historian Keith Wailoo put it, “lending renewed authority to biological conceptions of human difference and providing fodder for national debates over belonging, self-definition, and political power”. For instance, one school of historians believes that the caste system in India became more rigid and clarified during colonial rule. However, in 2009 scientists from Massachusetts Institute of Technology and CCMB reconstructed the genetic history of various caste and tribal groups and found little dilution in some genetic lines, suggesting that the caste system is of ancient vintage.

The study also found that all Indians were a hybrid of two ancestral groups that preceded the arrival of both Indo-Europeans and Dravidians, thus countering the popular view that north Indians descended from Aryans from Central Asia and south Indians from Dravidians.

Genetic archeology is not without its pitfalls though, as illustrated by the science writer Nicholas Wade’s controversial book A Troublesome History, in which he used data on human genetic differences to claim that variation in IQ among various races is an outcome of natural selection. But geneticists, on whose work Wade based his claims, denounced the book as “inaccurate and incomplete account” of their research.

Fetishing DNA as the cipher of all origins has also led to a comic exploitation of the age-old question: “Who am I?”. Anyone can now get their genetic histories unscrambled by ancestry companies for as little as Rs 15,000. In a world marked by a pervasive feeling of alienation, it’s not odd to feel a little flattered by a probable kinship with famous figures like King Charlemagne or Sage Agastya. The truth, alas, is most such genetic deciphering is imprecise at best and fallacious at worst. The reason is simple. Tracing back your pedigree unfolds in a geometrical progression, with the number of ancestors doubling every generation until the family tree begins to look more like a complex labyrinth where anyone or every one could be your ancestor. As the 2009 CCMB study demonstrated, all Indians are complex mongrels bred from two ancient ancestral lines.

Curious as we are about our origins, human pasts are hopelessly tangled in the twisted ciphers of DNA. Genetics can at best illumine a few dark corners of our lineage. It is perfectly legit to imagine yourself as related to a famous clan or a notorious horde. For that you don’t have to line the pockets of pedigree hunters.