Hoping to collide at CERN

The second phase of experiments, being conducted at world’s leading laboratory, to develop more understanding of sub atomic physics is about to begin

The second phase of experiments, being conducted at world’s leading laboratory, to develop more understanding of sub atomic physics is about to begin 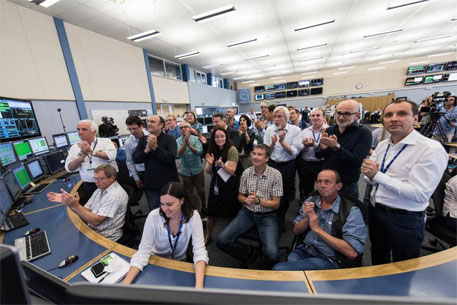 Exactly six days back, on May 28, 2015, I was in the labs of CERN, in Geneva, Switzerland. The institute, at that time, was readying itself to start its second innings at the Large Hadron Collider (LHC). This time, the proton beams would be made to collide at extremely high energy of 13 TeV, nearly double of the energy used last time when the experiments had indicated the presence of the Higgs boson, the elusive particle that seems to provide mass to all other particles. The researchers hope that these experiments would further increase the understanding of the sub atomic particles. Last time, the protons collided at merely half this energy. In 2013, the LHC was shut down for more than two years (27 months), for maintenance.

The preparation for the experiments would begin at 7am on Wednesday, at CERN or the European Organization for Nuclear Research, the world's leading laboratory for particle physics. The aim of the experiments is to generate data which would help understand physics more deeply. “It will create new physics,” said Markus Schulz who works on distributed computing at the information technology department of the organization. This is also the department where all important results of the collisions are stored.

The "second season" of the LHC, as CERN calls it, began in April 2015 when the proton beams were collided at low energy but by the time I reached there, the energy levels of the collisions had reached the 13 TeV levels. The beams could be seen on the screen as two fuzzy spots. As the proton beams move, as many as one billion collisions take place each second. The physicists are interested in the products of these collisions. The data generated during the collisions would be shared with researchers across the world.

It is not known exactly how understanding the smallest of component of the atom would help but the advantages are likely to be high. As Varun Sharma, a physicist at CERN points, "we can use electricity because we understand electrons. We are already using proton for treating cancer". Sharma works on the compact muon solenoid, a particle detector that helps see the sub atomic particles produced during the collisions. He will use the data generated to finalise his PhD thesis and submit it at Delhi University.