In a whitewashed country

We begin the new year with this piece on the ‘modern’ and 'traditional' from the Anil Agarwal reader (Vol.2) 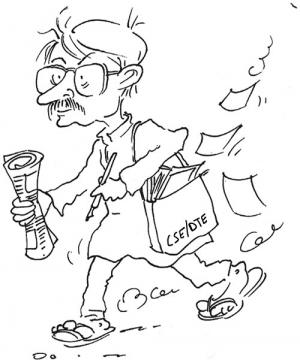 Until the global “multinational culture” fuelled by the Industrial Revolution hit the world, each culture — in India, as much as in the rest of the world — was the result of the people trying to survive within their immediate environment and indeed of an attempt to optimise the resources of their environment.

Traditional land-use and occupational structures have invariably been locale- specific and also invariably ecologically sound. Today, however, all these systems are either being negated or directly destroyed by modern development programmes, often in the name of scientific progress.

Modern science is usually logical and rational but its application has become the “new superstition” — “it has to be applied” is the refrain and it is done without much thought about its social and ecological context. Traditional knowledge is vital because of its ecological rationality — its inspiration being the sustainable use of the ecosystem in which it has developed.

Because productivity is important in a world where both population and human demands are growing, modern science and technology is also needed. But it must build upon traditional systems keeping intact their ecological rationality. This is the challenge modern science faces.

A fresh evaluation of traditional systems can also have major political and cultural repercussions. A fresh evaluation of traditional systems will force Indian experts to concede that they can learn much from “illiterate villagers”, who know their environment very well. In a “whitewashed” country — as Sartre would have put it — nothing can go further in giving people pride in them.

Anil Agarwal was the founder editor of Down To Earth; This has also been published in DTE’s print edition (dated 1-15 January, 2021)