Strong western disturbance to impact many states of India

Wet and stormy weather is in store for many states

A change of weather in northern, central and eastern India is expected as winter ends and pre-monsoon season commences, with the start of March. An upper air trough (also known as western disturbance) will reach India by Friday, March 11 and destabilise weather till Monday, March 14.

Unlike last year, the start of pre-monsoon season in 2016 has been sluggish. In the first nine days of March, only parts of Maharashtra, Rajasthan and eastern Madhya Pradesh have received excess rainfall. The rainfall in other areas has been below normal.

Lack of strong western disturbances and a strong El Niño have kept India’s winter warm and dry this season. As per India Meteorological Department (IMD), January to February is classified as winter season whereas March to May is pre-monsoon period. In January and February 2016, Jammu and Kashmir received just 78.8mm rainfall as against the normal of 212.9mm (strong departure of -63 per cent). India as a whole has received 17.9mm rainfall as against the normal 41.4mm (departure of -57 per cent). Region wise, rainfall departures in northwest India is -68 per cent whereas that in central India is -49 per cent. All subdivisions in north India have received scanty rainfall.

Lack of clouds and rain have kept temperatures high in otherwise cold states like Jammu and Kashmir and Himachal Pradesh. Between December 2015 and early March 2016, these states have witnessed maximum temperatures that were 2-4°C above normal.

As the western disturbance hits India, here’s what can be expected. 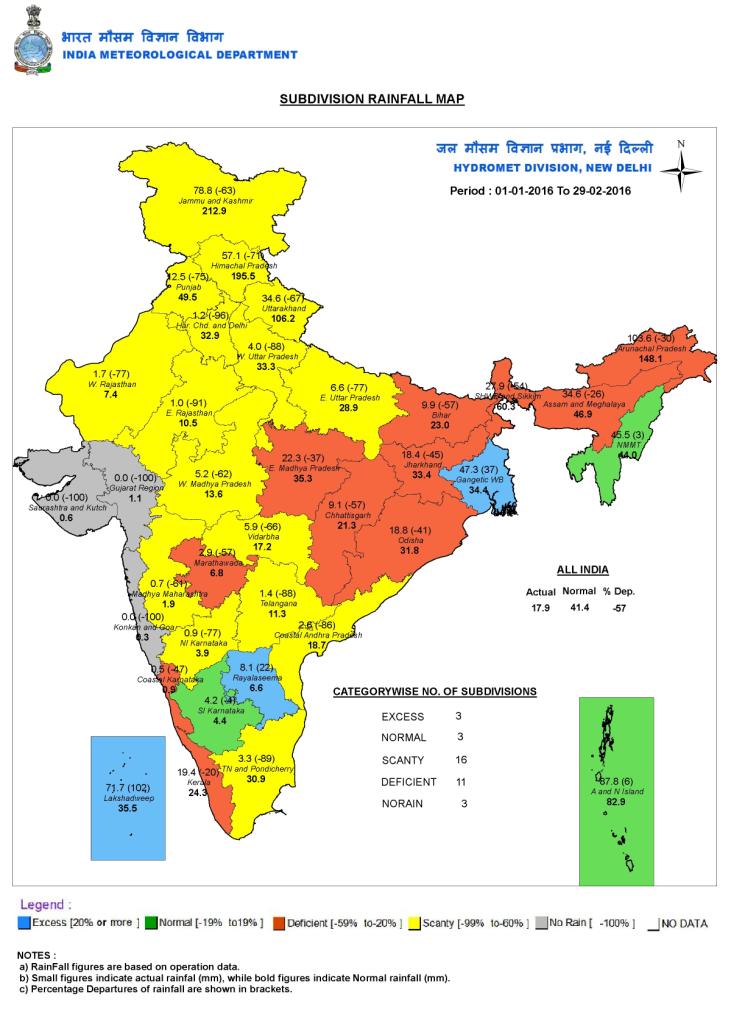 Effect of western disturbance will commence in India. Moderate to heavy rainfall is expected in western parts of Jammu and Kashmir (including Kashmir valley). As a result, Srinagar will receive rainfall too. Rain, coupled with cloudy weather will keep daytime temperatures low. Srinagar’s maximum temperature on March 9 was 7°C above normal. Hence, some respite from the heat is anticipated. Higher reaches of the state (such as Gulmarg, Pahalgam where temperatures are still below freezing at night time) will get snowfall.

Risks of water logging and flooding remain in Kashmir valley due to the rainfall forecast. Last year also, series of active western disturbances coupled with warmer weather caused a lot of rain and flooding in the state. People in low-lying areas of the state need to stay alert.

Thunderstorms along with rainfall are expected in western parts of Punjab and Rajasthan. There is also a possibility of hailstorm in the region bordering Pakistan. Over the night, light rain can be expected in north-western parts of Madhya Pradesh and western Maharashtra.

Effect of the western disturbance will be the highest on this day. Heavy rainfall is expected in western Jammu and Kashmir. On this day as well, the risk of water logging/flooding continues. Considering the rainfall forecast, rivers like Jhelum can swell-up and hence people living nearby must take precautions, in addition other residents of low-lying areas. Snowfall will continue in the higher regions. Areas in Himachal Pradesh (tourist places like Manali, Shimla, Kullu) will get rain and have an higher risk of landslides.

Rain/thunderstorms are expected in parts of Uttarakhand, Chhattisgarh and Maharashtra (Marathwada and Vidarbha).

Over the night, rainfall can be expected to spread in parts of Jharkhand and Bihar.

The effect of western disturbance in Jammu and Kashmir and Himachal Pradesh will start retreating. Chances of thunderstorms in north Indian plains continue because of atmospheric instability. Some thunderstorms will be severe and are expected to bring hail (especially in parts of Uttar Pradesh, Punjab and Haryana). Jharkhand, Bihar and Chhattisgarh will also receive some showers. There is chance of rain in Vidarbha.

Thunderstorm/rain activity will move towards east India and weather will normalise in northern and central parts of the country. If present weather models are to be believed, rainfall accompanied with thunderstorms (some severe) will be seen in Bihar, Jharkhand and eastern Uttar Pradesh, northern Chhattisgarh and eastern Madhya Pradesh.

Apart from potential flooding in Jammu and Kashmir, this round of rainfall/thunderstorm will impact horticulture and crops in Punjab, Haryana, Uttar Pradesh, Rajasthan, Madhya Pradesh, Maharashtra (Vidarbha and Marathwada) and eastern states of Chhattisgarh, Jharkhand and Bihar. Most Rabi crops are in their maturity phase and some have been harvested. Hence, rains can damage the harvested produce if not stored in dry places. Hailstorms will also have the potential of damaging the crops/orchards if hail nets are not used.

As some thunderstorms will be severe, the associated threat from strong winds and lightning strikes would also be there in this period.