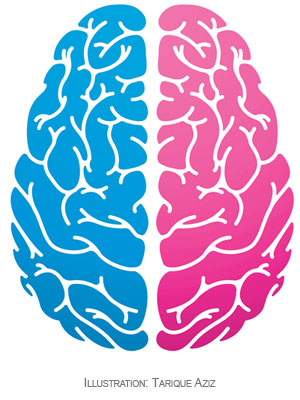 Ever since homo became sapient, the human mind (predominantly men, actually) has conjured up various notions of what it means to be a man or a woman. Barring rare exceptions, most view them as distinct as chalk and cheese—basically, umpteen variations on “men are from Mars, women are from Venus” theme.

Science, especially brain research, too has bolstered this gender stereotype by asserting that male and female brains are hardwired to perform different skills —men think logically while women intuitively, for instance. However, a recent Tel Aviv University survey of over 1,400 brain scans of both sexes found that while some elements are indeed peculiar to each, the dominant type, contrary to received wisdom, is a “mosaic” of various features, both unique to either sex as well as common in both. While those who espouse a rainbow position on sex and gender might feel vindicated, it is doubtful if it would dethrone a prejudice that has been shaped over centuries and is deeply entrenched in popular psyche.

Majority of cultures and religious faiths view men and women as separate archetypes distinguished by specific qualities. Anything in between is seen an aberration worthy of paternalism at best and bigotry at worst. Fluid imaginings such as the Chinese ying-yang, or the ardhanarishwara of ancient Hindus, which view the two genders as complimentary and inseparable, remain philosophical dinosaurs. Ideas about sex and gender remained more or less binary in the west until the advent of the feminist movement in the 19th century. But even feminists, even as they fought to claim their legitimate rights, ended up sharpening the fault lines further. Sigmund Freud and Carl Jung added new embellishments to the dogma of gender with their imaginative, but misplaced excursions into the male and female mind.

Science too stamped its imprimatur on the male-female dichotomy. Sociobiologists like E O Wilson argued that social behavior is more an outcome of the calculus of genes—for example, the fact that women are good in the kitchen and men in the battlefield is a result of eons of natural selection. In recent decades, neuroscientists have added another layer to this gender dichotomy—they argue that gender is not just about what lies between the thighs, but also and especially about what lies between the ears. Science’s current obsession with male and female brains is yet another play on the timeworn leitmotif.

This straitjacketed view of gender was defied by many feminist scholars and philosophers, who understood gender not as stemming from within but rather as something constructed from without, a view expressed famously as “one is not born, but rather becomes, a woman” in the French philosopher Simone de Beauvoir’s book The Second Sex. This is not to say there are no differences between male and female brains. The observation that women are more prone to depression than men or that men are more likely to suffer from schizophrenia may have as much if not more to do with social conditioning as with structural idiosyncrasies in the brain. However, the trouble is that even though studies often match sex difference in the brain to gender stereotypes, anyone who confidently claims that men and women think, feel and act the way they do because of dissimilar neural architecture is guilty of poetic licence.

This is because our brains and minds are dunked deep in a thick social soup, which may often edit the neural blueprint. Likewise, there are aspects of our behaviour that are not always amenable to a constructivist explanation. Nevertheless, the implication of the present study that our “gendered” brains are more like a mosaic than a chessboard should be welcomed. However, we can’t deny that the gender stereotype is deeply ingrained in our psyche—the struggle of lesbian, gay, bisexual and transgender groups against social and legal discrimination is a case in point. Any attempt at subverting the delusions of gender should begin with a progressive fashioning of young minds.