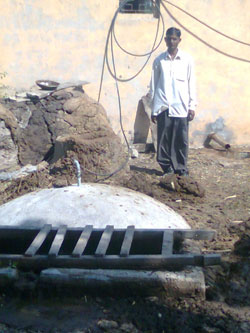 Shyamrao Deshmukh has no explanation, scientific or otherwise, to why his biogas plant works. He can’t even articulate the process through which he arrived at the solution that worked. “I … just….you know….thought of it, you know…,” he hazards hesitatingly. A younger cousin (Deshmukh is about 50) comes to his aid. “It came to him, you know….. he was just sitting, thinking of the problem….he was worried the unit will never work ……and it just, you know, came to him,” he goes on with much waving of arms and verbal emphasis.

I shoot a side-long glance at Deshmukh. “Yes,” he says humbly, “I just felt like doing it like that. I just felt it would work.”

After a substantial snack of poha (made from flattened rice and vegetables) and sheera (sweet-dish made from semolina) in a large semi-dark room piled high with sacks of soybean, the entire male population of the Deshmukh clan in the village—about a thirty-strong crowd of brothers, cousins, second cousins, numberless nephews—climbs off the sacks which double up as seats, and accompany me to Deshmukh’s cattle-shed on the periphery of the village to see the innovation. It is deceptively simple. The rubber drip irrigation pipe leading out of the biogas digester tank has been simply twisted into a large loop which is fastened to the bars of a window in the shed with some wire, from where, without further ado, the pipe leads back to Deshmukh’s kitchen, 500 metres away.

I can hardly suppress my scream of disappointment. Is that all? Nothing elaborate, nothing complicated, nothing sufficiently “techie” to make good copy! Just that old pipe twisted into a loop – as if to shorten it.

But then Deshmukh explains: “You see, when the gas travels through the loop, the moisture in it condenses and collects at the bottom.” He invites me to shake the loop—the bottom part feels heavy. “When there is too much water, it just flows back into the tank under the pressure of the gas.”

Meanwhile, everyone joins Deshmukh in recounting the story of how he nearly gave up on the biogas dream just six months before it finally worked. When he took his distance problem to the agriculture university, Punjabrao Krishi Vidyapeeth in Akola, an “officer” visited the village and told him he would have to use telescoping sections of PVC pipe to build up gas pressure, put the entire pipeline underground, and what's more, give it a gradual incline to ensure proper gas flow. In addition, he would also have to make arrangements to remove moisture from the pipe, though, what arrangements he did not specify.

“He would have had to dig up the concrete road, and go deeper and deeper with every metre,” chips in one helpful cousin. “By the time the pipe got to the house, it would have been two feet deeper than the kitchen floor. We calculated everything,” adds another, “How on earth was he going to lower his kitchen floor by two feet?”
Surprisingly, when he showed his finished and working model to this same “officer”, to the dismay of the entire village, “he did not say a single word. He just left hastily”. The hint of disbelief is still there in Deshmukh’s voice. I could empathise. In rural Vidarbha, to see anything new or innovative, and not to utter a word of encouragement or praise, a suggestion for improvement, or at the very least, a word of criticism or plain jealousy, is Class A misdemeanor.

So, who was this official? “Some Gadge”. A phone number is dug out.

Back in Akola, I broach the Deshmukh story when I meet “the Gadge”, who turns out to be S R Gadge, head of the Department of Unconventional Energy at Punjabrao Krishi Vidyapeeth. “Oh him!” he remarks, “There is nothing like that. I had only suggested that he build a poultry-based biogas unit.” And he goes on to elaborate how superfluous Deshmukh’s innovation is. “Distance does not matter—the Deenbandhu model (of biogas plant) always works. I know someone whose unit is working with more than 2,000 metre distance (between biogas plant and kitchen).”

This new twist in the plot leaves me stymied. Poultry? Deshmukh had meticulously shown me everything in his home and farm—the 15-year-old rain diaries he has been keeping, the special scratching pillars (pillars wrapped with rough material which cattle use to scratch themselves) in his cattle shed, the bumper sweet-lime crop, the harvested soybean crop. But no poultry. And anyway, how many chickens would you need to produce enough poop for a biogas plant? You just don’t miss a poultry that size.

I venture to suggest these facts to Gadge, and ask whether he is talking of some other Deshmukh. “Shyamrao Deshmukh? Tandulwadi, Risod? I know the guy. He even got an award in Kolhapur, I know. But there is no truth in his story,” he snaps.

After some bewildered head scratching, I call Deshmukh up. And he confirms he has no permanent poultry—just keeps a few chicks on a seasonal basis. When I tell him Gadge’s version, he is as bewildered as me. “Atta amhi kay mhanava tai (Now what can I say sister)?” he asks, bemused. “He did make a passing comment about the possibility of running a poultry-based biogas plant, but the main discussion was about the pipeline. He had spoken to me before the entire village, everyone heard. And weren’t they all present when I told you about the incident? Did anyone contradict?”

I sigh and nod. I know he is giving the best evidence he possibly can. And then he says what farmers always say: “Zaou dya na tai (let it go, sister).”

I have half-a-mind to call Gadge again, but I don’t. He will stick to his story, and there will never be any verifiable evidence as to which version is correct. And the story is not new anyway. It is the rare agriculture scientist who has not been negative, if not in downright denial, about farmers' innovations that succeed.

The only sad fact about the whole story is that four years since he worked it out, Deshmukh’s innovation has remained in his village. Four more farmers have constructed biogas plants on his lines, but that’s it. One wonders how many farmers might have been helped if the university had taken up the innovation and propagated it. But that is not to be till the elite man of science learns to respect the value of hands-on experience.