The murky dealings of the world's largest public relations agency 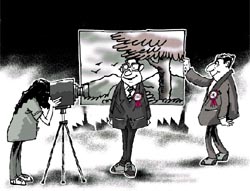 you may not have heard its name but Burson-Marsteller ( bm ) is the world's largest public relations firm, with 63 offices in 32 countries and a turnover of almost us $200 million in 1994. It is fast becoming an increasingly important cog in the propaganda machines of the new world order, representing international organisations, agencies and regimes with dubious records of human rights violations and environmental destruction.
For years bm has been involved in major environmental issues across the world, not hesitating to give polluters a helping hand when confronted by activist groups and government regulations.
Ideological barriers are of no concern. bm has also represented the late communist Romanian dictator Nicolae Ceaucescu. Doesn't this bother the consciences of bm 's executives? Not at all. Commenting on his firm's work for Argentina, bm founder Harold Burson said, "We regard ourselves as working in the business sector for clear cut business and economic objectives. So we had nothing to do with a lot of the things that one reads in the paper about Argentina as regards human rights and other activities."
bm's environmental services have benefited quite a few industrial polluters. To list a few:

• Babcock & Wilcox; when the mishap occurred at their nuclear power plant in Three Mile Island, usa, in 1979.

• Union Carbide; to handle the public relations crisis caused by the Bhopal gas tragedy in 1984.

• Exxon; to counter the negative press coverage it got in the wake of the Exxon-Valdez oil spill in Alaska in 1989.

• Ontario Hydro; an industrial concern headed by Earth Summit secretary general Maurice Strong, which is the biggest source of co 2 emissions in Canada.

• Louisiana Pacific; the logging company famous for its clear cutting of old growth forests and support for anti-environmental front groups.

bm has also formed the British Columbia Forest Alliance ( bcfa ), a Canadian front group which campaigns against restrictions on logging and is actively working to counter environmentalists. bm is a key player in the nuclear industry lobby. According to Canadian journalist Joyce Nelson, bm has for years "represented top nuclear power/nuclear weapons contractors"

bm coordinated the oil industry's campaign to discredit and derail us president Bill Clinton's proposal for a tax on the oil sector. A bm executive sits on the board of Keep America Beautiful, a front for the packaging and waste hauling industries, which lobbies against mandatory recycling laws in us .

bm 's most powerful and influential 'environmental' client is the Business Council for Sustainable Development ( bcsd ). bcsd 's original task was to act behind the scenes at the 1992 Earth Summit, to silence any voices critical of the irresponsible behaviour of polluting corporations.

In the words of Joyce Nelson, "With the able assistance of public relations giant Burson-Marsteller, a very elite group of business people was seemingly able to plan the agenda for the Earth Summit with little interference from non governmental organisations or government leaders.". Nowadays bcsd advocates free markets as the salvation for environment. Its members include companies from India as well.
bm was hired by the pharmaceutical corporation Eli Lilly and Monsanto subsidiary Nutra Sweet to promote the use of the genetically-engineered synthetic recombinant bovine growth hormone (r bgh) . The hormone, which increases milk output in cows, is strongly opposed by environmental activist groups. The use of r bgh has already been linked to severe medical problems in cows and to calves born with grotesque birth defects.

bm 's campaign to hush up the opposition to r bgh included the use of spies to penetrate activist groups. This fact became public when the University of Vermont spokesperson admitted that a mole had been placed in an anti-r bgh group headed by Jeremy Rifkin, a well-known critic of biotechnology. When the activists called the number left in the sign-up sheet by the alleged mole it rang in the Washington, dc office of Burson-Marsteller.

bm executive Timothy Brosnahan acknowledged that the accused person was a bm employee but denied knowing of any snooping on her part.

Tim Atwater and John Stauber, who were then with Rural Vermont and the Foundation on Economic Trends respectively, discovered documents revealing that the National Dairy Board, a farmers funded body promoting r bgh, had hired a sister concern of bm . Stauber concluded that "The day-to-day work (of the sister concern) is done out of Burson-Marsteller", implying the nexus. The nexus was reconfirmed by the fact that r bgh promoter Monsanto had hired bm 's parent company.

The public relations firm, bm works for Hydro-Quebec promoting the James Bay 2 project in the Canadian province of Quebec. If finished, it will become the most destructive hydroelectric project in the history of North America, disrupting the ecological balance of an area the size of France and permanently displacing the Cree and Inuit indigenous populations in the area. To undermine grassroots opposition to James Bay 2, bm created a phoney group of concerned citizens called the Coalition for Clean and Renewable Energy to "influence opinion makers who can carry the good word about Hydro-Quebec back to their institutions".


In 1990 the Mexican government hired bm to sell the North American Free Trade Agreement ( nafta) to the American public, media and politicians. bm subcontracted this job to one of its subsidiaries. One of nafta 's most nefarious consequences will be the dismantling of Canada's government-run health care system. As it places very strict limits on what domestic or foreign corporations can do, its more progressive features -- such as compulsory licensing in order to control drug costs -- will eventually be challenged as barriers to trade. Once the Canadian system is gutted by nafta 's notoriously secretive and undemocratic dispute resolution mechanisms, Canadian citizens will have no choice but to turn to the 'free market' for medical services and insurance. However, American and Canadian pharmaceutical and insurance companies that want to crack open the Canadian market are frustrated by the fact that Canadians are very happy with their health care system. Worse yet, more and more Americans, especially in Vermont, are now calling for the introduction of single-payer health insurance in their country -- a step in the direction of a Canadian-style system.

bm has plenty of experience in matters of public health. On behalf of client Philip Morris, bm created the National Smokers' Alliance ( nsa ) to fight against smoking restrictions. According to John Stauber, now the editor for PR Watch and Sheldon Rampton, co-author of Toxic Sludge is Good for You: Lies, Damn Lies and the Public Relations Industry, Common Courage Press, 1995, nsa "is a state-of-the-art campaign that uses full-page newspaper ads, direct telemarketing, paid canvassers, (toll free) numbers and newsletters to bring thousands of smokers into its ranks each week." The nsa is headed by bm vice-president Thomas Humber and its members include executives of bm and its subsidiaries. In addition to this, bm was hired by the company A H Robbins when it's 'Dalkon Shield iud ' contraceptive injured thousands of women who used it, and it is currently promoting the 'virtues' of Eli Lilly's anti-depressant wonder drug Prozac.

Pharmaceutical transnational corporations in the us , eleven of which are bm 's clients and major insurance companies, including, predictably, quite a few of bm clients, like Met Life, Equitable Life, Aetna, State Farm and Mutal of Omaha are fusing into superconglomerates known as health maintenance organizations ( hmo s). According to Joyce Nelson, "During 1994, both the pharmaceutical industry and the private insurance industry consolidated into even bigger players on the health care scene, with bm playing a major role in arranging the mergers among its clients."

What is the advantage these superconglomerates can garner? hmo s are not required to cover all illnesses or people, but can instead discriminate against elderly citizens and people with health problems in order to reduce operating costs. Its all business -- public health and human lives.

The author is a guest lecturer and research associate at the Institute for Social Ecology at Goddard College in Vermont, usA