Western disturbances or the areas of “disturbed air pressure” travelling to India from the west are a regular feature through the winter season. These are basically "extra-tropical storms” or low pressure systems originating outside the tropical regions. The rain and snow they bring in their wake to north India and neighbouring regions is formed from the moisture they carry from the Atlantic Ocean or the Mediterranean Sea.

This winter season’s most powerful western disturbance is all set to hit north India from this Wednesday (January 21). The countdown for its arrival has already started. 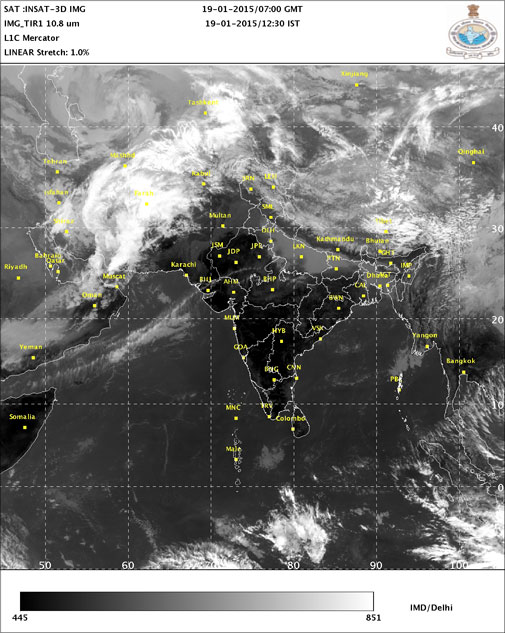 Every western disturbance is different from the previous one due to the differences in intensity. Following is what can be expected from this system.

Tuesday, January 20: Clouds due to this western disturbance will start arriving (mostly from evening) in Jammu and Kashmir and western Punjab. No severe weather threat expected on this day.

Up to four feet (1.22 metre) of snow (snow depth) is expected to accumulate in eastern Kashmir valley (Pahalgam included) on this day. About 14 inch (36 cm) of snowfall is expected in northern Himachal Pradesh; remote areas likely to get cut off.

Rainfall is also expected in Punjab, Haryana, Chandigarh, southern Gujarat and eastern Rajasthan. Overnight rains possible in Delhi-NCR with reduction in fog from Wednesday due to increasing cloud cover.

Thursday, January 22: A wet and cool day for almost entire north India. Rains expected to cover more parts of north India plains. Heavy snowfall will continue in the higher reaches of Jammu and Kashmir and Himachal Pradesh on this day. Srinagar is likely to receive the first snowfall of the season in the early morning hours of Thursday. Freezing rain shall continue in the later hours of Thursday. Moderate snowfall for Ladakh forecast on this day.

Due to snow accumulations, Jammu-Srinagar highway may get closed on this day along with minor disruptions in the flight schedules at Srinagar and Leh. Disruptions expected in the rail traffic in Jammu and Kashmir.

Reduction in the rain/snow from late night hours, but it will give way to extreme cold weather in these areas.

Friday, January 23: Light snowfall can be expected in higher reaches of Jammu and Kashmir and Himachal Pradesh. Dense fog expected to return to the plains of Punjab, Haryana, Chandigarh, Delhi-NCR and Uttar Pradesh.

The weather will clear up after this.

Some tips on how people in Jammu and Kashmir and Himachal Pradesh can make themselves weather ready:

Refer this link http://www.ready.gov/winter-weather for more tips regarding how to prepare from this western disturbance.