Negotiators from developing countries lack the strategy to put equity on the global climate change agenda. But the US has already begun to define it for them 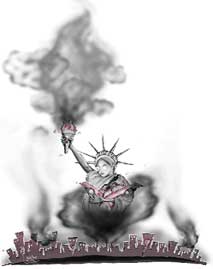 for readers who came in late into the climate change debate (and have not been reading their previous issues of Down To Earth carefully enough), here is a recap on the equity principle that developing countries such as India and China have asked for in the climate convention (regular readers can skip the first two paragraphs):

l As carbon dioxide emissions are directly proportional to development, developing countries should have the 'space' to increase their emissions, while developed countries should now reduce, having already used up their share. The extent of increase and reduction should be decided on a per capita basis. This should be done by dividing the amount of carbon emissions -- considered a safe limit -- equally among all the people of the world. This will form the 'entitlement' of each individual and country.

Developing countries have worked hard to put forth this principle. But they have been opposed by the us at every step, not only because the us does not want to change the opulent lifestyles of its citizens but also because their industry is pushing the government hard against giving the South any sort of business advantage over the North.

us negotiators, we know from the past, are master strategists. They have worked hard to lead the world into believing that the climate change convention is about pleasing them and their Senate, rather than about saving the world from global warming. It takes long hours of work by solemn-faced us negotiators -- and they always carry surplus -- to work in shifts at tiring out delegates from developing countries to make them agree to anything (or to give up on anything) at the end of a conference. And they always have a strategy.

Consider, for example, the us strategy on voluntary commitments.

Undaunted, us strategists went to work. They struck a side deal with old pal Argentina, which is desperate to join the Organisation for Economic Cooperation and Development ( oecd ), to agree on voluntary commitments at Buenos Aires, and put them on a pedestal for it. If this country can set such a shining example of global cooperation, they told the other developing countries, so can you. Future meetings will reveal how well the strategy works.

The equity argument that India, and sometimes China, put forward erratically has been a thorn in the side for negotiators for at least two conference of parties now. Their initial ploy was to nip the argument in the bud. So, when India asked for entitlements on the last night of the Kyoto meeting, the us was the loudest to say that India was holding up negotiations, and that it had no business bringing up a new subject for debate on the last day.

But as the demand for equity got louder, the us realised that it could no longer be brushed under the carpet. In November 1998 at Buenos Aires, they came prepared with their own definition of equity, constructed by none other that the Pew Center on Global Climate Change, established in 1998 by the Pew Foundation, which in turn was set up by an oil company called Sun. The Pew report is called Equity And Global Climate Change: The Complex Elements Of Global Fairness .

Its definition of equity has little in common with what the South demands.

Pew's 'new approach' to equity involves three criteria: responsibility, standard of living and opportunity. As developed countries have historic responsibility for carbon emissions and better standards of living, the onus of mitigating climate change falls on them, right? Wrong. Not according to the Pew Center definition of responsibility.

According to the report, "in line with the polluter pays principle", responsibility "would include not only who emitted in the past, but also who will emit most in the future" . And of course, the large developing countries come out on top when calculations are based on present trends in carbon emission growth. Using present trends to make the calculations itself is an indication of how little importance the us gives to the eventual aim of the climate change convention, which should be to change these trends completely by moving away from the carbon path. Though the us was unwilling to accept the polluter pays principle when it took into account historical emissions early in the climate negotiations, it is willing to accept it when it also takes into account future emissions from developing countries. That is how the report pushes the us argument for developing country participation.

The second catch in the Pew definition of equity is the inclusion of opportunity. " If one country can more cheaply reduce emissions than another, then perhaps it should be asked to do so ." Of course it is cheaper to cut emissions in developing countries. Their technology is older and cheaper to change. But this also conveniently shifts the focus from developed countries back to the developing. The report conveniently highlights the United Nations Convention on the Law of the Sea, that obligates parties to act "in accordance with their capabilities" in the event of pollution of the marine environment. And it goes a step further, recommending the following as a guiding principle for the convention: All nations should work to the best of their abilities -- or with the help of other countries -- to reduce emissions ....

So the report pushes the us argument that developed countries should be allowed to meet their entire commitments under the Kyoto Protocol through emissions trading, without changing anything at home. This method will, in fact, provide them with the cheapest way to meet commitments, but no incentive to change away from the carbon path.

Using these definitions, the Pew Center's report draws a conclusion that the world is already familiar with. It advocates a three-tier grouping of countries put forward by Stuart E Eizenstat, us undersecretary of state for economic, business and agricultural affairs, just before the Buenos Aires meeting: the Must Act Now , Should Act Now, but Differently ,and the Could Act Now categories. While all industrialised countries come in the first section, along with Argentina, Chile and Venezuela, the second category includes India, China and Brazil. The Could Act Now s include small island states and countries such as Bangladesh that are likely to suffer most due to global warming.

The report rejects the per capita argument put forward by developing countries, claiming that it "creates perverse incentives for population growth". It suggests, instead, that both per capita and national emissions have to be taken into account.

The conclusions drawn by the report give the us everything it wants: voluntary commitments from key developing countries (under the Should Act Now, but Differently category); trading in emissions (as developed nations can reduce emissions with the help of other countries); and an assurance that citizens of the industrialised world would not see a lessened standard of living (one of the factors to be taken into account listed by the report).

Eizenstat referred to the Pew Center report pointedly while addressing non-governmental organisations at Buenos Aires. The us will probably build this argument in time for the next meeting, when the equity debate will have matured in the convention. They will present their very own definition, and push for its implementation. Developing countries will then find themselves being hit on the head with their very own terminology.

Buenos Aires came close to pushing for a clearer definition of the equity and entitlements principle. Developing countries would have done well to grab the chance and push for at least a report by the Intergovernmental Panel on Climate Change ( ipcc ) on the issue.

There is definitely a lesson for developing countries from the Pew Center report. It does not pay to simply bandy words; timing and strategy is just as important.