Subhash Sahni, a fisherman who rows a small boat near the Ganga -Gandak confluence at Patna, once demonstrated his skills to me. He showed me how to attract two prized fish varieties—Bachwa and Gherua—to his fishing hook. Having fewer bones, these fish are easier to eat and are tasty. Naturally, they fetch a good price. Within a few minutes into Sahni’s demonstration, the fish started jumping against the choppy river current and began following the thin oily film spreading over the boat’s downstream. Sahni used oil extracted from carp trash and other ingredients to lure the fish. As soon as fish approached the boat, he used his hook to catch them.

The rapidity with which the fish got entangled excited me but there was much more in his fishing method that got me interested.

Traditionally, fishers in the Ganga and the Brahmaputra use oil extracted from the subcutaneous fat of the Gangetic dolphin to catch catfish. The carp oil used by Sahni is a good alternative. The dolphin, declared the national aquatic animal three years ago at the first meeting of the National Ganga River Basin Authority, is in peril. It is estimated that about 2,500 dolphins are left in Indian rivers. Conservationists suspect its population has gone down by 50 per cent since Independence, largely because rivers have become sites of development projects. Barrages and dams restrict the movement of dolphins, leading to their genetic isolation and a decline in population. 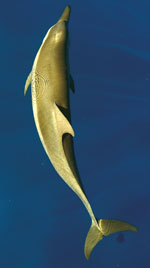 The threat is especially acute in the Brahmaputra river system, the second most popular home to the species after the Ganga river system. Reports point out that 170 dams are in the planning or commissioning stages in tributaries of the Brahmaputra. Five dams are under construction; the lower Subansiri, the lower Siang, the Dibang, the Lower Damwe and the Kulsi dams would shrink the dolphin habitat.

The dolphin distribution range in the country is among the most dense human habitats in the world. Dolphins live in the rivers that receive millions of litres of city sewage every day. Synthetic agrochemicals are washed away from the intensively farmed river catchments and seriously affect the dolphin, which is at the apex of the food chain. Presence of DDT, aldrin, endosulfan and butyltin compounds has been reported in the Gangetic dolphins. However, the extent to which the chemicals affect the reproductive biology of this slow breeding dolphin species is yet to be determined.

Changing fishing methods also poses a threat to dolphins. They prey upon small fish, mostly trash in terms of fishers’ economics. Fine mesh nets used nowadays by fishers virtually take away all smaller fishes and crustaceans upon which dolphins feed.

The river dolphin is almost extinct in China’s Yangtze river. In India, the situation demands more than awareness programmes and scientific studies on this species. Dolphin conservation must be factored in irrigation, infrastructure development, agriculture, urban development, inland waterways, tourism and fishery projects. Scientists and ecologists must ascertain the minimum level of water in the rivers conducive for dolphins, so that sectors that use river water plan accordingly.

We cannot separate the concerns of dolphins from the interest of traditional fishing communities. The communities must be encouraged to take up dolphin- friendly fishing practices and must be compensated for their losses while conserving the species.

Samir Kumar Sinha is with Wildlife Trust of India. He can be reached at samir.wild@gmail.com