Why cement makers are shy of waste material like 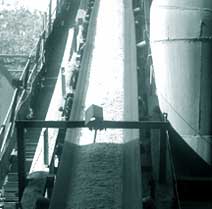 What goes into making cement? The obvious answer is: limestone, which makes up approximately 94-95 per cent of Ordinary Portland Cement. But cement is more accommodating: the Bureau of Indian Standards says flyash can comprise up to 35 per cent of cement, and blast furnace slag (bfs) -- a waste product from the iron and steel industry -- up to 75 per cent. The use of fly ash and bfs in cement, thus, is immensely attractive, and while the former has attracted a lot of attention, bfs utilisation is an issue not yet adequately addressed.

Both the iron and steel and the cement industries agree that bfs can be easily reused. For the steel industry, bfs is but a waste product whose disposal is a headache. In the spirit of crep (see: crep : a review), this sector has agreed that, by 2007, it would ensure all the bfs it generated would be utilised. On its part, the cement industry knows this waste is of benefit. The Associated Cement Company's production plant in Jamul, Chhatisgarh, for instance, has successfully been manufacturing and marketing Blast Furnace Slag Cement in which bfs makes up 46 per cent of the product. For a cement manufacturer, bfs is a win-win situation -- a scarce resource, limestone, is less used and energy is saved (less clinker is required to produce one tonne of this cement). Yet the industry is loathe to use bfs.

bfs is officially a by-product and therefore an excise duty of 16 per cent is levied on it. Presently, a cement manufacturer has to pay Rs. 150-300 per tonne of bfs. However, to encourage its use, there exists a provision whereby cement manufacturers can claim the money they pay as excise duty. But the provision translates to additional paperwork and red tape. So cement makers shy away from bfs.

India is the world's second largest producer of cement. According to the Cement Manufacturers Association, 123.5 million tonnes of cement was manufactured in 2003-2004. And the industry is booming. If its ecological impact is to be minimised, alternative waste materials like bfs will have to be utilised. The Indian steel industry generates 10 millions tonnes of granulated bfs every year. Presently, the cement industry uses 55 per cent of this. But if bfs is used to the maximum possible extent, India could annually save 15.7 million tonnes of limestone.

So, can rules be made less slaggard?