Small brother is watching you 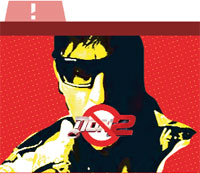 In one sense it was funny—if you were not affected that is. Customers using the Internet services of Reliance Communications (RC) and some other services found their access to file-sharing websites blocked last month. When a friend went to one such site, Megaupload.com, he was outraged to find that it had been blocked. The message on the site said: “This site has been blocked.” At the bottom of the screen, the censor proudly proclaimed, “Copyright Reliance Entertainment (RE). All Rights Reserved”. Was it the blocked page that Reliance Entertainment was copyrighting as its own intellectual property?

This is no laughing matter, though. There is rage everywhere about the role of Internet service providers (ISPs) in policing the Web, a role permitted by the courts in response to specific requests. This is not the first time that RC has blocked access to file-sharing websites such as BitTorrent and Filesonic.

Whenever Reliance Entertainment, a sister concern of the Anil Dhirubhai Ambani Group, releases a film it has produced, presto! filesharing sites are blocked. First was in July 2011 when Singham was released, a month later was Bodyguard, and then in December when the Shah Rukh-starrer Don 2 hit the cinemas. It is a sweeping attempt to stop piracy of their films, admittedly rampant, that raises troubling questions on Net freedom and the role of courts in curbing it.

Such extreme steps by film studios are, as far as I can tell, peculiar to India. That’s because courts give them a John Doe order that permits such broad actions. A John Doe order is a court injunction that is issued against unknown offenders. It is often used in copyright and IP-related cases. But again, websites can be blocked only by the government—and only by the Department of Information Technology. Legal experts make it clear that not even the Department of Telecommunications (DoT), under which ISPs function, can block websites.

What has been happening is that RE goes to court on the eve of a film release and seeks an injunction. In the latest case it said RE had exclusive copyright over Don 2 and if “CDs/ DVDs/Blue-ray discs/VCDs are made and the film is copied by using any other device and uploaded on the internet by the defendants and other unidentified persons and distributed and shown on cable TV, DTH, internet, MMS, Tapes and CAS, plaintiff will indubitably suffer irreparable loss and injury”.

RE claims that under Section 79 of the IT Act, an ISP has to adhere to any copyright infringement notice and court orders, and that it was “in full compliance of law”. It also complains that file-sharing sites like Megaupload and Filesonic are located out of India and, therefore, the John Doe order was the only step that copyright owners are left with.

There is controversy over how this order has been applied. The court has only said that the film should not be made accessible and not that entire websites should be blocked. Washing its hands of the collateral damage, an RE spokesman said: “Our only appeal with this order is that you cannot make the film available through your network. It’s a matter for the ISPs to look into because it becomes their liability.”

Nikhil Pahwa of MediaNama, which analyses digital media issues, explains that since ISPs cannot ensure or monitor individual instances of piracy, they appear to have gone ahead and blocked the file-sharing sites, “probably deciding that it’s better to be safe than sorry, and ended up throwing out the baby with the bathwater”. He says it is reminiscent of the 2006 blogger block when instead of blocking sub-domain pages, on orders of DoT, the ISPs completely blocked Blogger, Typepad, etc. In this case, by blocking access to these sites, the ISPs appear to have ensured blocking of legitimate file-sharing as well.

Industry, however, is likely to seek more John Doe orders because it believes the measure is bringing down piracy by as much as 40 per cent. But that comfort may not last long. Since every action has an equal and opposite reaction, as Newton said, so too with the Net. Megaupload says the ban presents a great opportunity for them to test their anti-blocking technologies. Megaupload’s Kim Dotcom said in an interview to TorrentFreak that these blocks are usually resolved in a week but while they last they give the company a chance to do some analysis.

“For us the India block is a great opportunity to see how users respond. In India we have one of the highest installation rates of our Megakey application. It gives users direct access to our servers. The Megakey instantly cures any kind of ISP or DNS blockade and always finds the fastest route to our servers,” he is quoted as saying.

Round 2 of the online piracy battle promises to be more thrilling than Don 2.