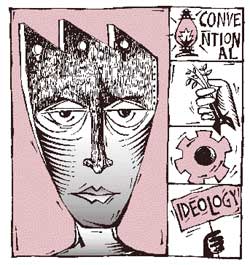 The Rio Earth Summit launched its Agenda 21 in a wash of conventional wisdom. Solutions to environmental problems would be sought in rich countries encouraged by governmental fiscal and regulatory pressures and, as an innovation, by ngos and citizens' action. With Western leadership, these model solutions would trickle down to the newly industrialising countries in the South. Financial assistance from the North if needed, would be given especially through the Global Environmental Facility hosted by the World Bank.

It is now time to ask how sustainable development is doing on the ground ? A uk-based policy think-tank, the Royal Institute of International Affairs along with Earthscan, London, has published a slim volume which turns the conventional questions upside down. Surprisingly, David Wallace, the author of Sustainable Industrialisation, asks if it is not to the South that we should look for leadership in working towards sustainable industry. Wallace looked first at Western governments for evidence of taking seriously those policies which try to favour sustainable industry. He is struck most by the Dutch, Germans and Danish endeavours. The overall goals of the Dutch plan are to conserve energy and favour cleaner energy sources, and to enhance the quality of production processes and products. The German approach lays more stress on recycling. Wallace, however, cautions that as recycling targets are raised, energy use may well intensify, thus introducing a new form of pollution. There is a risk of the problems being simply shifted rather than solved. The Danish policy highlights an individual's 'environment space' -- the amount of environmental resource each person can draw on without depleting the environment.

Wallace also observes that production paradigms have changed. Industrial production systems have gone through the craft production phase and the mass production phase. After World War ii, Japan put forward its lean production or 'just-in-time' approach, which is a system with profound impacts across the production network of suppliers and contractors. What might be the next paradigm? Of course, it should be the integration of environmental sustainability into the industrial production process. However, like previous new paradigms this one will present alternatives to fundamental assumptions about the production system in force, and these in turn will imply a multitude of changes in practice and organisation. In fact, Wallace foresees "a need for revolutionary changes in the characteristics of production if global consumer needs are to be met sustainably".

Could the new paradigm along with sustainable industry emerge in the South? It depends on two issues. The first is whether you believe that environmentally sound technologies (est) and 'latest technologies' are similar. As new technologies evolve in the industrially advanced countries they do reflect the pressures generated by environmentalists and international treaty obligations. The second consideration is how you view multinational corporations (mnc) as agents of sustainable development. Wallace believes that there is "evidence that many mncs are applying environmental standards far in excess of those required by the host governments". He also cites shareholder pressures, fears of major incidents and liabilities and public opinion as favouring the same tendency. The final stage in the argument, if you admit that there is much that mncs can do to contribute to sustainable patterns of industrialisation in developing countries, is predicting the relative future flows of foreign direct investment (fdi) as against official development assistance and as a proportion of the total fixed capital stock in a country. Not in India, which had only one per cent of fixed capital stock derived from fdi in 1995, but in China which had 20 per cent and in Malaysia which had 24 per cent. The rich countries are too set in their ways to adjust quickly to sustainable industrialisation although their companies do invent the modalities. Even the Asian tigers are also too set in their ways to change course with ease, but the industrialisers of the South can get there. They will not have to repeat the sorry history of Northern industrialisation which has caused so much damage to the planet's eco-systems.

Peter B Stone is a journalist based in London, UK