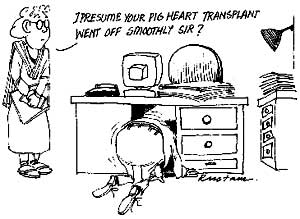 in its latest report, Animal to Human Transplant: The Ethics of Transplantation , Nuffield council, an influential bioethics advisory group and independent watchdog in the uk, concluded that the risk associated with the possible transmission of infectious diseases as a consequence of xenotransplantation (transplanting organs of one species to another) has not been adequately dealt with because it is unethical to conduct clinical trials involving human beings. The report urges the uk government to immediately establish an advisory committee on xenotransplantation, to assess potential public health risks, define precautionary measures prior to human clinical trials and protect patients' interest.

Recently, in India, the unsuccessful case of a pig heart transplantation by D R Baruah, an Assam-based doctor, created a furore. Baruah was arrested by the police on January 9, on suspicion of a breach of ethics and flouting the Organ Transplant Act, 1994, after the patient Purno Saikia, died. The incident highlighted that there is always the possibility of a virus or an infectious agent lurking in a pig's kidney or a baboon's liver which might infect the host and result in a vicious disease that may even infect the entire humankind. Humans have been known to be susceptible to a variety of animal viruses like the monkey pox virus, the herpes b virus from macaques and viruses of porcine influenza and the swine vesicular disease. Prions (infectious biological particles containing a protein) which cause degenerative brain diseases, are also capable of species-hopping.
Spare-parts surgery, using animal organs, challenges our notion of humanness and our sense of distinctness from other species. However, if one wishes to follow the Nuffield council's recommendations, how does one handle the fact that in 1994, 5,000 people in the uk were waiting for kidney transplants, while 320 were in need of a biological heart? The 1996 figure is yet to come. But certain parts of the report seem exaggerated and overemphasised. The high risk of disease transmission from primates persuaded the council to favour pigs over primates. The report draws attention to the similarities between simian and human immunodeficiency viruses. But what the council seems to have missed is the greater risk of disease transmission in human-to-human transplantation.

Earlier, the major source of insulin for diabetics was pig and cattle pancreas. Despite millions of diabetics taking several such insulin injections daily, there were very few reported cases of bovine or porcine disease transmission. Insulin, of course, is a purified compound and not a living preparation. However, it may be recalled that purified proteins extracted from human sources have a far worse record of disease transmission than animal insulin.

The Nuffield council also raised the question of animal organs themselves being susceptible to animal diseases. The council report highlights the possibility of prion disease passing from species to species, but also states that such disease transmission may also occur due to transplantation or by eating infected things; bacon and ham should, therefore, be avoided to keep pig prion at bay. There are, however, many diseases which are virtually species-specific and highly unlikely to cause any disease in humans. One may recall several animal pathogens which had proved beneficial for human beings. From Louis Pasteur, who produced the first rabies virus to modern producers of the influenza vaccine who are still cultivating attenuated virus in chicken eggs, experience indicates that growing viruses in cells of other species can make the infection agent less pathogenic, less fit for its invasive, disease-causing role, and less likely, therefore, to affect humans.

So far, primate xenotransplantation exercises seemed to have worked in a statistically acceptable way. If the trials demand several forms of pre-transplantation and post-transplantation monitoring for both the source of animals and patients, it can always be fulfilled. A committee of the Food and Drug Adminsitration (fda), us, had demanded a list of pathogens to be screened for specific source animals, an archival registry to survey patient samples and stated the criteria for exempting an animal from study.

Biotechnological companies associated with xenotransplantation like Imutran of Cambridge, uk, and Nextran of Princeton, New Jersey, us, are not worried about the fda's guidelines or the Nuffield council report. While welcoming xenotransplantation, David White, president, Imutran, said, "It is important to have regulations...that researchers should be protected from their own enthusiasm," adding in the same breath, "I don't think we'd be prepared to sit around twiddling our thumbs while the government organised a committee and our patients were dying. If a committee is in place, we'd be happy to submit our proposals."