A German supermarket is a consumer’s delight. Numerous varieties of fruits and vegetables greet the eye. There are native and exotic fruits, piles of lettuce, kohlrabi, onions and potatoes—all for a few cents. The milk products section has countless varieties of dairy products. The sheer mass of cheap milk products makes selection difficult. The consumer also has choices galore in the sausage and meat section.

After World War II, food was a prized commodity in most of Europe. Meat was eaten once a week. Coffee and milk were valuable. With economic prosperity food became cheap. It is now mass produced. We have come to associate progress with industrial food production. But environment and society have had to pay a high price.

Some of the methods farmers use to make sure the customer pays a few cents are frightening. They spread partially toxic sewage sludge on fields as fertiliser. Waste water that flows into water treatment plants contains numerous solids. These solids (like faeces, food scraps) settle on the floors of sewage treatment plants. It also contains toxic compounds from washing, bathing and flushing toilets besides toxic heavy metals and hormonal substances (from the urine of women taking the pill). This slurry is then subjected to biological or chemical treatment. But the final product continues to have toxic substances. A part of the sewage sludge is burned, but the rest is spread on the fields serving as fertiliser for corn, beets or potatoes.

The recent dioxin scandal in Germany in the meat sector has brought to the fore consequences of buying food cheap. When the meat industry exhausted all tricks—breeding chicken in a manner that it puts on weight quickly, packing chickens in coops—it used other ways to increase profits. Animal feed costs were reduced by using cheap industrial grease and leftovers from diesel production. During the scandal, media and society focused on poisonous dioxins in animal feed. Little attention was paid to the fact that chickens were fed industry fat. 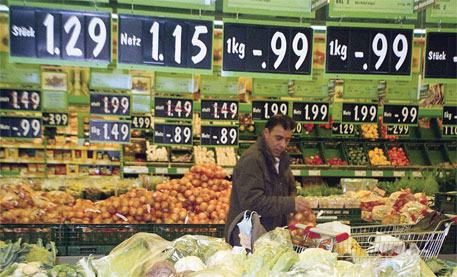 That such methods were ever used show how bereft of ethics meat production is.

If you ask anyone in Germany how he or she imagines a chicken the answer is most likely to be brown. Most imagine cows as a black and white spotted animal. They are not wrong: chickens in Germany are primarily brown and the most common dairy cow is black and white and sometimes brown and white spotted. The sad and worrying fact is this is considered normal because hardly anyone knows the background for this standard image. Hardly anyone in Germany knows that many breeds are or about to become extinct.

Critters are gone forever. Earlier, many people kept their own chickens or pigs. They would occasionally slaughter their animals themselves. Others purchased meat from small domestic abattoirs or farms. But over time, small farms have been supplanted by large units and their cheaper products. Meat has become an assembly line product.

The meat industry relies on high performance animals. A few breeds have proven particularly suitable. Among dairy cows it is the Holstein-Friesian. The focus on breeding high-yielding dairy cows increased milk yield per cow from 5,730 litres in 1995 to nearly 8,400 litres now. In the 19th century Germany, there were about 35 breeds of cattle. Today, there are only five races.

Loss of livestock diversity is particularly strong in industrial nations. But all societies in which economy carries more weight than ecology face the danger of focusing on high-yielding breeds and exterminating old races.

Verena Farhadian is political scientist at University of Tuebingen in Germany