A law can be effective only if it's reasonable

“How many of you listen to music?” All 20 hands in the room went up. “How many of you share music?” Again, the 20 hands went up. “And how many of you know that sharing music is a violation of the copyright law?” All hands stayed up. “Then, why do you still do it?” Many reasons followed, topped by: “Music is like nature. It belongs to everybody. So I think it is not morally wrong to share music even if it is technically illegal.” Nineteen heads nodded in affirmation. Then, the clincher. “If the law were invoked and one of you was arrested for pirating music, how many of you would support such an action?” Not a single hand went up.

The previous afternoon, the same group, comprising mostly young and sincere foresters, had listened intently as a forest ranger recounted how he had dealt with local villagers entering the National Park—in violation of the wildlife law—everyday to gather firewood. The group was training to manage reserves under our wildlife, forest and environmental laws. “The villagers know it is illegal to collect firewood from the park, but they still come in,” the ranger thundered. “So we identified every villager who came in and booked trespass cases against them. They received a reprimand from the magistrate, and a warning they would be jailed for repeat offences. From that day, all firewood collection in the park stopped.” The group looked suitably impressed. Then, the group’s instructor asked, “What did the villagers do for firewood then? Did they have alternative sources?” The ranger replied, “No, these forests are their only source of firewood, but you see, it is not our job to find them alternatives. Our job is simply to implement the law.” The trainee foresters nodded in agreement. 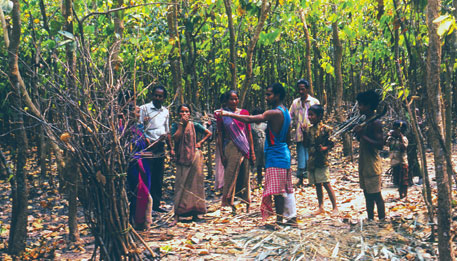 Seen separately, these two anecdotes are unremarkable. But taken together, they raise important questions about the nature of law and its enforcement, in the context of wildlife conservation. Why would a group of people with abiding faith in the tenets of one law, reject entirely, those of another? And, if the enforcers of our wildlife laws could thumb their noses at the copyright law, would it be fundamentally wrong if villagers outside the National Park did likewise to the wildlife law?

Given that over 250 million Indians depend on forests for their daily needs, there is no doubt that even modest acts such as firewood gathering can have a huge impact on our forests. But it is also amply clear that enacting and enforcing laws to keep forest-dependent people out has simply not worked. Take the example of Bandipur National Park. Although it is illegal to gather firewood from its forests, most of the 40,000 households residing outside Bandipur, including families of forest staff, have done so for decades. What the law forbids—firewood collection, in this instance—has always seemed a totally reasonable thing, not just to local villagers but also to the forest guards who implement the law. And the consequences for Bandipur’s forests have been severe. So, how can such a law actually be made enforceable?

The solution is beautifully demonstrated in the story of Namma Sangha, an organisation that has quietly set up a cooking gas distribution service now covering 35,000 households that earlier depended on Bandipur for firewood. Today, with most households having cooking gas, they are less reliant on the forests. But there’s a subtler, more significant change: by widening access to cooking gas as the alternative to firewood in these villages, Namma Sangha made the decades-old legal restrictions on firewood collection seem more reasonable, and hence, more enforceable. To be enforceable, a law thus needs, not just the weight of legality, but also the force of legitimacy.

Any law has a greater chance of being effective if it is also reasonable. Is it any surprise then there is less of a moral dilemma in condemning an ivory poacher than a villager gathering headload of firewood to cook a meal for her family? Adherence to the law will remain a distant dream if we continue to thoughtlessly enact and enforce legislations, even well-meaning ones, that criminalise reasonableness. Some of the biggest threats to our wildlife still come from the reasonable acts of ordinary people. To fight these threats, we sure must employ the law, but not before we have employed reasonableness.

MD Madhusudan and Pavithra Sankaran are with the Nature Conservation Foundation, Mysore and can be reached at web@conservation.in.