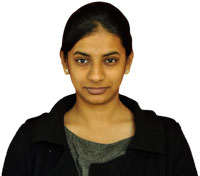 While covering the recently concluded panchayat elections in Uttar Pradesh, the photographer and I happened to stop at a crowded polling booth in Keliya village of Kaunch district, about 150 km from the town of Jhansi. We were looking for “election pictures”, and a group of five or more women wearing bright blue, pink, green and yellow sarees coming towards the booth seemed ideal. These were the first panchayat elections post the central government’s ordinance that 50 per cent seats be reserved for women.

Clad in a bright red saree with her veil pulled down to her chest, a woman candidate for the post of the gram pradhan was walking to cast her vote. The whole way from her house to the polling booth – about 500 metres – her reed-like husband dressed in a spotless white kurta and dhoti was tutoring her on the symbols she had to vote on. He repeated over and over again that she must vote for the tamarind sign as that was her symbol. As I approached her for a talk before she entered the polling booth, she shooed me away saying, “Wait, I will come back and speak with you otherwise I may forget my sign”.

So I waited watching her husband make small talk with others at the booth requesting them to vote for his wife. But soon unheeded by her husband the woman poked her head out of the booth asking what symbol was she to put the mark against. While her husband was busy bargaining for a few more last minute votes, a young boy nearby told the woman she had to mark on the mango. Later I found out that the mango was his uncle’s symbol. As soon as the woman came out her husband asked what symbols she had ticked for. On her response he immediately started shouting and abusing, and the cops standing nearby had to resolve the matter. She was contesting against 15 other women in her village for the pradhan seat and I met four others... not very different from her.

One of them when asked what she would like to do for her village if she gets elected promptly looked to her husband and said, “Whatever they tell me to.” After much coaxing and prompting from the men around she said, “I will do development for the village and do what the villagers ask me to.” Another 50-year-old woman distributed leaflets in her village two days before the polling day. When I approached her she informed that this was the first day she had been able to step away from household chores. So far her husband, whom she could not name (it is disrespectful) but whose name was printed larger than hers on the leaflet she was distributing, and sons had been doing the canvassing.

I was shocked to see that this woman who was contesting for the gram pradhan post did not even know her symbol. The first striking feature of the whole candidate canvassing that I witnessed was the husband/son/brother and father featured bigger than the woman candidate herself. Be it on the hoardings, poster, leaflets or the door-to-door campaigning it was the husband’s name and achievements that came to the fore. The woman was just the nomination and nothing more. When I heard the villagers speaking about the women candidates as mere fronts for their husband/ brother/ son and father, I was bothered but assumed this was just because men are not used giving power to the woman and thus are possibly not acknowledging the women or dismissing them. So I decided I must speak to them on my own and I did.

The few places that the women candidates were more than mere puppets they did not stand a chance because the puppet had better backing both man-power and financially. Sad but true. A woman who knows her mind seems to have lesser chances of surviving in the chauvinistic world looks like it. One of them I happened to meet while she was going door-to-door asking people to vote for her. This 38-year old woman has worked in self-help groups for the last 12 years, has travelled across the country and worked with few non-profits. She believes that the long and repeatedly promised roads and drains are not the only salvation for villages. “Every one thinks if they have roads there will be development...

But I do believe that for real upliftment of the rural population what we need is sustainable agriculture,” she informed me before a mob of drunk men surrounded us demanding from her how she was going to improve things in this village. Every time she opened her mouth of the ten odd men standing there some one would shout that she doesn’t know the ways of the world or that she is just a woman and therefore cannot really change anything. After a few moments we had to be rescued by her uncle and brother who came and broke up the crowd escorting us out of the village. “I usually only canvas during the day because after four the men become unbearable this close to the elections, especially with all the free liquor flowing in the village,” she told me.

I don’t know how to compete with this. It is true that I want more women to stand for elections be part of the democratic process both at the voting level as well as in the places of authority. But then I don’t want them to be just puppets. If these women come to power then the age old saying of women don’t know anything are ignorant just gets reinforced. And I think that defeats the whole purpose. At the same time I cannot judge them. We sitting in our fancy multi-storey buildings in the cities whether it’s the government offices, the non-profits or the feminist activists cannot decide what women liberty means. There is one school of thought, which believes that perhaps this is just the beginning and once the women come into the political fray in greater numbers they will eventually learn the ways of the world and grow of their own agency. How true or plausible that thought is remains to be seen.