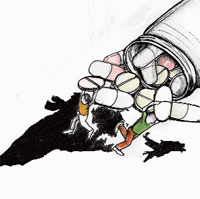 Two patents being nullified in quick succession may not add up to a trend. But in this season of revocations, patient groups and public health lobbies and, of course, the generic drug industry are sniffing the promise of a new spring in these decisions even though both can be challenged in different forums.

First, it was Pfizer’s patent for Sutent, a drug for treating liver and kidney cancer that was knocked down in late September. A board set up by the Indian patent office to hear a post-grant opposition filed by leading generics manufacturer Cipla of Mumbai and several other companies revoked the 2007 patent granted for Sutent declaring that Pfizer’s invention was obvious and involved prior art. In other words, the claimed compound did involve an inventive step.

Strike two was Roche’s patent for Pegasys, a medicine used to treat hepatitis C. Two weeks ago, the Intellectual Property Appellate Board (IPAB) revoked the patent on Pegasys (peginterferon alfa-2a) on the ground of “obviousness” because Roche was unable to prove that it was more efficacious than its older, non-pegylated version of the drug.

This post-grant opposition did not come from industry but from a patients’ group, Sankalp Rehabilitation Trust, which provides treatment for drug users. Such people are prone to infection from the hepatitis C virus.

IPAB said interferon alfa was an established treatment for hepatitis C and the use of pegylation to improve the action of proteinbased drugs added nothing new or inventive to its earlier drug because the process had been in use since the 1970s. As such, anyone “skilled in the art” could have arrived at the claims made in the Swiss pharmaceutical giant’s patent. IPAB also dismissed the claim of increased efficacy, with its verdict that “the respondent has not discharged the burden of proof”.

Interestingly, Roche’s patent on Pegasys had been upheld by the patent office after an earlier challenge from Sankalp and drug company Wockhardt.

Both Pfizer and Roche can contest these decisions, the former in IPAB, which it has already announced, and Roche in the Supreme Court of India.

All of this means huge reduction in cost of medicines to patients, dramatically so in the case of Pegasys which is an injectable. The hepatitis C drug, like most such high-end medications, is unavailable in the country’s public healthcare system and is out of the reach of all except the very well-to-do segment of the population. According to documents with IPAB, a course of treatment with Pegasys costs around Rs 4.38 lakh (about $8,000), although it can be availed at a discounted price of around Rs 3.15 lakh plus Rs 47,000 for oral ribavirin that is administered with it.

Pfizer’s Sutent costs around Rs 1.96 lakh for a 45-day treatment under a special discount offered by the multinational whereas the medication carries a reported retail price tag of Rs 2,55,149 for a pack of 28 capsules. Cipla, on the other hand, proposes to sell the generic version of the cancer drug (sunitinib malate) at a quarter of this cost, according to media reports. Pfizer, incidentally, is not the developer of the drug but only has the licence to market sunitinib worldwide. It secured a patent in India in 2007 and in the following year Cipla filed a post-grant opposition as did several other companies including Natco Pharma of Hyderabad.

The two patent revocations appear to have shaken the innovator companies which are once again claiming that intellectual property rights (IPRs) are not protected in India despite the country’s laws complying with WTO-mandate on IPRs. Innovator companies, mostly multinationals, have been engaged in a relentless legal battle to overturn certain sections of the 2005 amendments, in particular Section 3 (d) and 3 (e) which list what is not patentable under India’s Patent Act. These sections prevent drug companies from evergreening patents, a term used to describe the practice of prolonging the life of patents—20 years is the norm—through additional patents on new forms and derivatives of a known substance.

But there is a curious twist to one of the revocations. In what can only be described as a bitter-sweet victory, Cipla has been restrained from making sunitinib by the Delhi High Court. Following a petition moved by Sugen, the company which discovered sunitinib, and Pfizer, a single-judge Bench had barred Cipla from launching its generic drug. Since the case has been adjourned till December, Cipla’s domestic rivals may enjoy a head start unless of course Pfizer/Sugen takes similar action against them, too. For the moment though it does seem like less taxing times are ahead for some patients.