Crowds braved the blazing heat to watch a tiny black spot flit across the Sun's face; no one wanted to miss the opportunity of watching the rare celestial event, says Dinsa Sachan 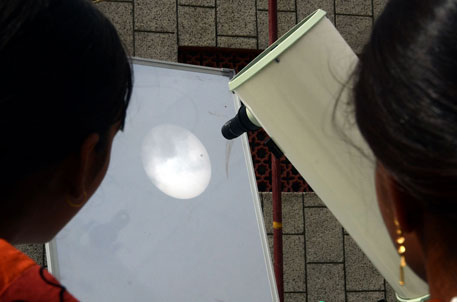 By now, many are familiar with the poignant tale of the 18th century French astronomer, Guillaume le Gentil, who was unable to view the transit of Venus despite the best of his efforts. He was commissioned by the French government to observe the transit in 1761 and calculate the distance between the Sun and Earth. Le Gentil sailed all the way to Pondicherry, which promised the best viewing prospect, to view the remarkable event, only to find that British troops had laid siege to the small town. Unperturbed, he set up camp in Africa and waited for eight years for the next transit in 1769. Snubbed by the Phillipines, where he had planned to carry out his observation, he sailed towards Pondicherry again.

On the day of the transit, things looked favourable—it was a bright and clear day. However, right before the transit, clouds enveloped the sky and deprived le Gentil of another opportunity. Le Gentil must have gritted his teeth when news that his rival Robin Cook had made the measurement reached him. People may think le Gentil was eccentric for his obsession with the planet, but truth be told, transit of Venus, as it is called, is an event of very special importance, which you probably realised as you watched news channels showing students throng an observation camp in Noida from early morning hours on June 6.

Shriya Rai, a 14-year-old student at the camp, said, “I won't be around when it happens next, so I don't want to miss this opportunity.” Indeed, it would have been foolish to miss this opportunity for the next transit will occur after 105 years. In Delhi's sweltering heat, around 400 people had huddled at an observation camp in Noida.

“Transit of Venus is a rare celestial event, one that occurs only twice in a cycle of 243 years. The next transit will occur in 2117, “ Subodh Mahanti, honorary director of Vigyan Prasar, told Down to Earth at the observation camp organised by the instititution in Noida. It's even rarer than the eclipses.  Transits occur in pairs, and the last two were in 1879 and 1884. These events are even rarer than the solar and lunar eclipses.

The historical importance of the transit is known already: it helps us calculate the distance between the Sun and the Earth.

Mahanti explains, it's quite simple. Go back to your school days and imagine you're in your geometry class. Let's select two locations on Earth and draw an imaginary straight line between them and call it baseline. Now connect Venus with the two locations with a straight line each. Now if you can calculate the angle between the baseline and the adjoining lines, it's a piece of cake to measure the distance between Venus and Earth.  Using Kepler's law, you can calculate the distance between Earth and the Sun.

Vigyan Prasar had been gearing up for the event for a long time. In the past few months, it had trained around 50 amateurs as master resource people. These people would independently spread the word on the transit, and explain the phenomenon to observers on June 6 across various observation camps.

Biman Basu, former editor of Science Reporter and a special guest at the event, says the turn out was pretty good considering it was so hot and most of the children are away on vacation. “The timing is a little inconvenient, too, considering the best view was between 5.30 am and 7.30 am.”

Mahanti says even though the Venus transit is a rare celestial event, it's not as spectacular as a solar eclipse. The sky goes dark during a solar eclipse, and that creates a lot of euphoria  among people. “The transit is something you can't notice until you're using a telescope,” he observes.

At the camp, as one looked through the telescope, Venus could seeen making a slow transit across the Sun, like a tiny black fly flitting across it.

Under the shade of a pandal, scientists and communicators, including Mahanti and Basu, answered questions posed by an enthusiastic audience. “Are all planets round or spherical?” a little girl enquired. A man in his 20s asked in Hindi, “Toh srishti ka vistar ho raha hai?” (Is the universe expanding?)

Mahanti says these kind of camps are an important platform for inculcating scientific temper in people. “People know so little about science. Our goal is to make them enjoy science,” he says.

He added that science teaching is in bad shape in the country. “Most schools follow the rote learning model when it comes to teaching science. To make students learn science, you need to teach it hands-on. When they look through the telescope and appreciate the event, questions spring to their minds. And these questions encourage them to take the subject,” he says.

Such efforts also help dispel superstitions. He recounts he was in Odisha when the 1980 complete solar eclipse occured and the whole of the country was locked inside their rooms. “Even though foreigners were desperately flocking to the country to catch sight of the eclipse, which wasn't visible in other parts of the world,” he recalls. People believed venturing out during an eclipse could make them sick. In 1995, when there was another complete solar eclipse, people came out in millions, he recalls.

“We had campaigned hard to spread awareness about the event, and that made all the difference,” he says.