Taking labour out of the picture 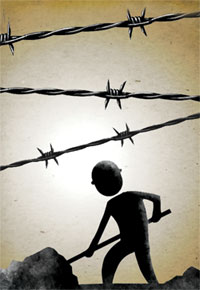 On october16, there was a message on my mobile phone from Narendra Modi congratulating me on the portability facility for my EPF (Employees’ Provident Fund) account. It was actually from the EPF Organisation (EPFO) but the Prime Minister’s name had been tagged on. Since I had already got my unique account number from EPFO and activated it some months ago, the SMS did little for me. But it is possible that millions of other EPF account holders were not aware of this and may have seen it as “a triumph of labour” or Shrameva Jayate, as Modi has named his well-advertised labour reforms programme. There were millions of SMS alerts a day earlier to the inauguration of the much-hyped new deal on labour.

Modi’s big bang reforms, as one business reporter hailed it, has a simple message. Industry will have very little oversight as it readies for a new growth push. No more inspections, no more forms to fill. The centrepiece is abolition of “inspector raj” or the tyranny of factory inspections by labour department officials. Henceforth, such inspections would be random, through a computerised system based on data trends and objective criteria. These terms were left unexplained. All that employers have to do hereafter is file a single self-certified compliance report for 16 central laws. A single assurance that would certify all is well at their places of manufacture as per the law. The harassment and corruption inherent in the inspection process would be a thing of the past. Delighted industry lobby groups said the measures would help bring in transparency and ensure social security benefits to help workers. Clearly I am missing something here because the connection escapes me.

Modi thankfully was more forthright on the rationale for the reforms. He said ease of doing business was the first and foremost consideration if Make-In-India, his project to get global companies to use India as their manufacturing base, is to succeed. The world has changed, so, let us start with trust, he says. And, indeed, we should. But who are we to trust: the new system, industry, or the government? Recall, for instance, the terrifying report carried a few months ago in Midday of Mumbai on the lack of safety for workers and the public at large in 230 of the city’s chemical and other manufacturing units in crowded localities. Not that Mumbai is exceptional. Violations of every kind are rampant across the country, even in hazardous industries. The question is whether compliance matters any longer or if the new dispensation is merely intended to make life simpler for everyone except labour.

If there were reforms for labour, it appeared stuck on as an afterthought. Apart from portability of EPF accounts—for those lucky enough to have them—the new deal includes very little for the working classes. There is talk of a revamped health insurance, again for those fortunate to have the limited cover of the Rashtriya Swasthya Bima Yojana, and there is the promise of a repackaged skill development and apprenticeship scheme. For Indian labour, who the International Labour Organization describes as among the most vulnerable in the world (see ‘Making labour the fall guy’, Down To Earth, August 29, 2014), there is little cheer on the horizon. With the Modi government’s focus on clearing roadblocks for industry, the rights of labour are unlikely to figure very much in its calculations. Instead, the Rajasthan model of whittling away the benefits of workers is all set to become the national template.

It is doubtful if the country noticed—or cared—that there was a deafening silence from the trade unions and labour to Shrameva Jayate. The worker has been scrubbed from the picture.