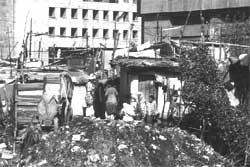 across the world, silent and ceaseless crises regarding public health and environmental degradation urgently require the mobilisation of global science and technology. Gearing technological innovation towards solving the crises, by meeting the needs of the poor and the environment in which they live, is among the most critical challenges of the 21st century.

For many years, since the release of the Brundtlant Commission report in 1987, the international community has recognised that problems related to poverty and the environment are inextricably linked. Indeed, the issues of poverty and environmental decline were central to all the major UN conferences of the 1990s -- Rio, Vienna, Cairo, Barbados, Copenhagen, Beijing, Istanbul and Rome.

Recently, a two-year effort sponsored by the United Nations Development Programme and the European Commission has explored the relationship between poverty and the environment to identify policies that have successfully addressed poverty eradication and environmental regeneration. A key strategy was to promote infrastructure and technology development that was pro-poor as well as pro-environment.

What is involved here is technology in the broadest sense possible, encompassing not only physical infrastructure but also a broad set of policy, institutional, governance and management questions. A few examples -- urban environmental services, renewable energy and information technology -- illustrate why the development of pro-poor, pro-environment infrastructure and technology is so critical.
Two fifths of people in Africa, Asia, the Pacific, Latin America and the Caribbean now live in urban areas. This requires a change in environmental thinking. A shift from the traditional conservation model to an environmentalism that centres on the health and livelihood problems stemming from inadequate urban services for the poor. Key problems requiring technological innovation include sub-standard housing, lack of clean water, sanitation and solid waste systems, and poor energy services. As the poor are more seriously affected by the hazards that arise from environmental degradation than the non-poor, improved services and reduction in the amount of waste entering the environment can have an important effect on reducing poverty.
Providing adequate, efficient and environment friendly energy is the second key challenge. Energy is central to the everyday life of all people, rich and poor. But the poor spend a disproportionate amount of their time and income securing energy. They pay a higher price per unit of energy than the rich and spend more time obtaining these energy services. The poor have benefited very little from conventional energy policies.

Worldwide, more than two billion people continue using traditional fuels with their attendant health risks, particularly for the women and children. The fuels and devices available to the poor are less efficient, pose a greater danger to the users and a larger hazard to the environment, than those of the rich. Yet, small improvements in the level of commercial energy services available to the very poor could generate dramatic changes in their quality of life. One way to ensure that the poor do indeed benefit is to focus not on increasing the supply of energy but on improving the level of energy services, such as efficient lighting, better water-pumping technologies and efficient cooking stoves.
The third key challenge, albeit one of a somewhat different nature, is information technology. It offers tremendous potential for bringing information, resources, and opportunities to even the remotest corner of the Earth. Its capacity for transforming lives with distance learning and telemedicine is tremendously exciting. It can link farmers, small business people, and entrepreneurs to the global market place, enabling them to find new outlets for their goods, get better prices for their supplies, assess demand and access financing. But while it can bring people together, it can also build walls between them. Information technologies could, easily, further entrench the marginalisation and impoverishment of disadvantaged groups and, indeed, of entire countries. The critical issue is to find ways to ensure that the information revolution lives up to our hopes rather than our fears, that it opens doors rather than shuts them.
Developing pro-poor and pro-environment technology requires innovation -- significant planned change toward technologies that are more responsive to the needs of the poor and the environment. But what does it take to achieve such innovation? A new way of doing business at both the national and global levels.

Successful technology development and adoption requires long-term partnerships among researchers, practitioners and end-users. For partnerships to work and result in the emergence of ideas and attitudinal changes required for assimilation of innovations the research and development community, governmental and non-governmental implementing agencies and civil society groups must be involved.

Especially critical are new alliances between the public and private sectors. Problems of energy supply, waste management, water services and the provision of the infrastructure required for the information revolution to reach the poorest require creative and innovative public-private partnerships.

There is a tremendous need for new approaches that build upon the combined experiences of the public and private sectors, that mix financial incentives with mechanisms to ensure that benefits accrue to the poor. One example is the 'medicines for malaria venture', which involves the World Health Organisation, public-sector organisations and drug companies and aims to release a new malaria drug every five years.

At the global level, an equally new way of doing business is needed. But at this level, the changes relate much more to the incentives that need to be in place to foster the development of global public goods. Global action is needed not only because many of the challenges outlined earlier are too large and widespread to be tackled by any one country alone but also required because many local and national needs, related to poverty and environment, have global implications. The shift from conventional to renewable energy, for instance, can have significant impact on the global warming phenomenon. Information technology is in many ways a global public good. Such implications demand both a need and an opportunity for global cooperation.

Unfortunately, however, much of the recent innovation in global science and technology has done little to help the poor and their environment. A lion's share of global research resources is geared for the problems of the rich. Global science, based in the North, responds to the needs real and perceived of the North. The pharmaceutical industry is particularly illustrative of this trend. Although more than us $56 million is spent annually on health research, less than 10 per cent of that it directed towards the illness suffered by 90 per cent of the world's people.

There are always barriers to innovation. Strong vested interests generally support conventional technologies. Often, as is the case clearly with energy, conventional technologies are underpriced, either because of subsidies or because they do not reflect the true environmental and social costs. Lack of information and capacity to implement change often impedes the creation and adoption of new technologies. But when it comes to environmentally sound technologies for the poor perhaps the single biggest inhibitor is lack of financial incentives.

Pharmaceutical companies invest their research and development dollars in drugs likely to give high returns, especially since most prescription drugs take 10 years and over us $300 million to develop and be approved. Viagra, which costs about us $10 a pill and has no shortage of buyers, is a good example of the sort of drug pharmaceutical companies jump at the opportunity to produce. They are reluctant to invest in developing drugs for which there is no lucrative market, such as drugs that treat the ailments of the poor in the developing world.

Several proposals have been put forward to address this state of affairs, in particular those contained in an important set of articles that appeared in The Economist in August, 1999. One is to ensure adequate funding to the un organisations charged with promoting technological development. Another is to guarantee a market for a product by having several donor countries pledge to purchase a set amount of the technology produced. This pledge could spur the private sector to take the risk of investing in the necessary research.

Roberto Lenton is the director and Kristen Lewis the policy specialist for the Sustainable Energy and Environment Division at the Bureau for Development Policy, United Nations Development Programme, New York