Swamped by a surge in tourist population, Thailand has but to turn towards alternative tourism 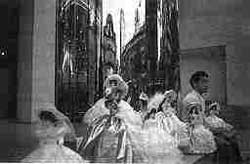 TRASH-STREWN beaches, tribes reduced to selling cheap trinkets and tourists on the prowl for prostitutes, have forced many in the travel industry to promote a healthier 'eco-tourism' in both Thailand and Vietnam before it is too late.

A small organisation called Alternative Tourism of Thailand now conducts tours for foreigners from NGOS who come to this Southeast Asian nation to see what can be done to help the people, rather than simply viewing the gorgeous temples and going for other attractions.

Improving tourism in Thailand is not only an ethical matter. It is also good for the economy because a glut of new hotels have opened their doors only to find a drop in the number of tourists visiting Thailand. The four million or so tourists who arrive each year spend us $3 billion or more, making tourism the largest ever source of foreign exchange in the country.

But lately, many tourists have been skipping Thailand because of its escalating AIDS epidemic, its fraying reputation as a commercialised tourist trap, and a worldwide recession which has been keeping travelers closer to home.

Pattaya beach, for example, has blossomed from the '60s when it provided us soldiers with 'rest and recreation' among prostitutes and water sports during the Vietnam war, until its present-day fame as the largest and naughtiest beach resort in Asia.

Pattaya's 30,000 hotel rooms, 100 miles southeast of Bangkok on the Gulf of Thailand, are suffering low occupancy. Environmentalists, meanwhile, rail against hotel sewers which dump waste into the coastal waters. As a result, many of the big hotels had their own water treatment units built. The Thai Hotels Association now gives 'Green Lxaves' to Pattaya's ecologically correct hotels as recognition.

Tourists visiting Thailand's coastal resorts, however, often witness garbage being dumped from their boats into waters frequented by scuba divers. And if a reef att6cts vacationers, the boatpeople simply toss their anchors over the side, permanently damaging long stretches of fragile reef below.

Thailand's most famous beach resorts like Pattaya, Phuket, Koh Samui, Koh Phi Phi and the Similan Islands, all suffer from severe pollution and degradation, thanks to the tourism industry, according to environmentalists.

The Coastal Resources Management Project jointly run by Thailand's National Environment Board and the University of Rhode Island in the US is now trying to help save the nation's coasts and raise awareness about eco-tourism. Financed by the Agency for International Development, us, the project is trying to convince boat operators to avoid damaging the coral and to stop dumping garbage at sea - especially plastic bags and oily bilge water - which is especially deadly to coral.

Special mooring buoys have been placed strategically so that boatpeople do not anchor whenever they stop. The group also warns souvenir shops about the law banning collection of living coral, although Halong bay fisherfolk lurk among the rocks in the islands with an array of tourist souvenirs laid out along the sand, waiting for boats to dock, so that visitors can buy baubles while exploring caves and cliffs.

A similar warning comes from the CHUMA Primate Rescue Center's founder, Margaret Himathongkom, who said, "As an act of protest against the cruelty and torture that befall these poor creatures, boycott any establishment that serves wildlife cuisine, or that keeps captured wild animals as tourist and amusement attraction - and yes, I am referring to hotels as well - in cramped, filthy conditions with inadequate dietary requirements and without fresh clean drinking water available at all times."

Leome Vejjajiva of the Wild Animal Rescue Foundation of Thailand, while agreeing upon this point, said, "Elephants are treated badly everywhere in Thailand. Elephant keepers stick needles and spikes into the elephants'legs to make them dance for tourists. There is an animal farm for tourists near Bangkok's Floating Market which is a revolting place. They say, they get 2,000 tourists a day there. They milk snake venom in front of tourists so many times a day, that the snakes' mouths bleed."

Vejjajiva said that the government is'trying'to crack down on abusers by staging police raids. But often, culprits already decamp before authorities arrive. Eco-tourism advocates in Thailand have yet to fight another enemy - hundreds of exclusive golf courses carved out from rice fields, coastal areas and other idyllic settings which are draining the community of valuable water resource.