Doves can cost a fortune in Thailand, where the people pay heavily to domesticate the bird. 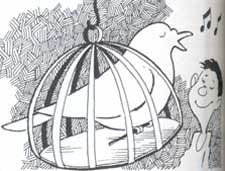 THAILAND is literally a land of happy people for in the local language, thai means happy. The Thais are nature lovers and they are so fond of songbirds, they keep them as pets. Often, houses in Bangkok, the capital, have a decorated cage in which a bird coos melodiously. But unlike Indians, who have a penchant for parrots, mynahs, pigeons and love birds, the Thais prefer doves.

On a recent visit to a friend's house in Bangkok, I noticed three cages hoisted on tall bamboo poles. Each contained a 20-cm-long, ash grey dove. It was morning and the birds were busy singing a chorus. Fascinated, I asked my friend how much he had paid for the birds and he replied 10,000 Bahts (Rs 12,500) for all three. The price was astonishingly high because a hen or a duck normally costs between 50 to 100 Bahts in Bangkok.

I questioned my friend further and he said the cost of singing doves depends on the quality of their voice, which is judged by its pitch, melody and volume. The more melodious a bird, my friend said, the higher its price. Singing birds cost at least Rs 500, with no upper limit to their price. And so the range would be from several thousand Bahts for a small bird to 80 Baht for certain fancy varieties, such as white doves that cannot sing but are kept as decorative pets.
Early each Sunday, one of Bangkok's most surprising events begins -- the city's famous bird-singing concert. Proud owners bring their singing doves in beautiful cages so they can perform at an informal concert held in a public park. The best songbirds win prizes and the park concerts are extremely popular among the Thais.

My friend said there are a number of dove farms in and around Bangkok, where doves are bred on a commercial basis. One such is farm located near the airport on the outskirts of the capital and it had a small building, surrounded by green shrubs, with a large number of enclosures containing different varieties of doves. The birds' cooing was melodious and uninterrupted. Just as one dove began its song, another would join in, singing with the same vigour and in the same pitch. There were more than 1,000 doves of different colours and breeds, in addition to hundreds of other varieties of rare birds such as mynahs from Indonesia, peacocks from India, coloured pheasants from Holland, bulbuls and love birds from Malaysia and a rare long-tailed hen. I was amazed to see even tiny, fist-sized monkeys, imported from South America, performing acrobatics in their cages.

The farm owner, a retired Thai Army colonel, showed off his proud collection enthusiastically and explained selective breeding methods were used to produce a prized catch. This would involve choosing a good singing mother and pairing her with a good singing father. Their offspring hopefully would be a potentially excellent singer, but if it wasn't, then it would be released in the forest for a poor singing dove has no market value.

The colonel explained that for successful pairing, natural habitats had to be replicated and external disturbances, minimised. In the absence of a suitable environment, the birds find it difficult to breed. For this purpose, the colonel said, he had built large-sized enclosures indoors with branches and even small trees and he took special care to ensure the birds are not disturbed.

Clearly, dove-breeding may be lucrative but it necessitates patience and a deep knowledge of bird psychology and behaviour.