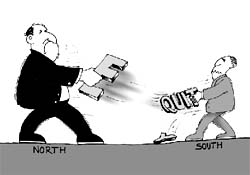 at a meeting of international scientists and non-governmental organisations ( ngo s) at the Netherlands recently, a list of controversial issues related to the United Nations Framework Convention on Climate Change ( unfccc ) was put to vote, to prioritise discussions. The list contained a range of issues, from the fears expressed by the Organisation of Petroleum Exporting Countries ( opec ) that they would lose income if nations cut down on fossil fuel use, to principles such as equity between nations in the convention. Participants were given red and green dots to mark issues listed on a flip chart - a green dot signifying high priority issue and a red dot low priority.

Though opec 's concerns have raised very little sympathy among international environmental groups in the past - many consider their demand for compensation to stop polluting as ridiculous - it was not opec that got bottom rating at the Netherlands meeting. Instead 'principles of equity' was a red blotch at the end of the voting, signifying maximum resistance, and a rash of emotion against the issue. Why were the participants, mostly Westerners, against even discussing the principle of equity within an international convention such as the unfccc ?

The reaction of this group mirrored that of many Northern ngo groups to the e -word, ranging from uneasy silence (for who in this day and age can come out and oppose equity outright?) to absurd arguments that per capita entitlements would give countries an incentive to increase their population. Many see the principle of per capita rights to the atmosphere as compromising the future of the climate negotiations because the us , the world's largest producer of greenhouse gases, will not hear of it. They argue that the climate convention is not the forum to address equity - another place, another time, they say. Very few Northern groups are willing to come out in support for equal rights to the atmosphere and accept that industrialised countries will have to curb their emissions while allowing developing countries a chance at development.

Northerners at the Netherlands meeting preferred an incremental approach to the convention - lay down rules as you go along, rather than discuss principles that industrialised countries may have a problem with. Unfortunately, this approach just does not suit poor countries - in the long run, all they have in their favour against the economic might of industrialised countries is strong and just principles. If the climate convention does not accept the principle that all human beings have equal rights to the atmosphere and lay down exactly what these rights are, what is to prevent industrialised countries from using more than their share? This fact has escaped civil society groups, who have become partners to a form of modern-day eco-imperialism, giving equity concerns in the unfccc low priority simply because the us Senate will not hear of it.
ngo s and scientists, which form the backbone of the world's civil society, have had a role in the global warming issue from the very beginning - first in raising public awareness of the gravity of the problem, and, early in the negotiations, in keeping the issue in focus. At the first conference of parties (