The aam politician is a crorepati

Every other politician who is elected now is a crorepati, even those in the Aam Aadmi Party

Every other politician who is elected now is a crorepati, even those in the Aam Aadmi Party 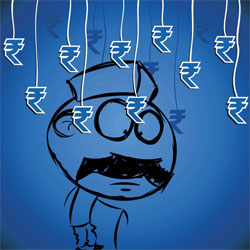 Credit Suisse Research Institute recently released a report that showed India now has 182,000 dollar millionaires. Its Annual Global Wealth Report 2013 put India 15th among the countries with the highest number of wealthy people. Not a bad showing considering all the moaning and groaning that has been going on about the economic slowdown and the nosediving rupee. There have been closures and huge job losses, of course, but those involved mostly the aam aadmi who in any case do not figure in any kind of list. The neighbourhood electrician losing his job at a small unit never did count at any time.

Now we have confirmation that at least one sliver of the country’s 1.26 billion population is growing from strength to strength. Last year, we added 24,000 more to the list of dollar millionaires, at a faster clip than elsewhere in the world, more than in Hong Kong and Singapore, Indonesia—and at a time when the economy grew at the slowest rate in a decade. So, it is probably this class that kept the bourses and the real estate market on a high despite the downturn. Mind you, we are talking about a country where just 0.4 per cent of the people have a net worth of more than US $100,000.

But there’s cheery news from Credit Suisse. Over the next five years India, it predicts, could add 120,000 millionaires to its list of the affluent even if 94 per cent of the population has wealth of less than US $10,000. In case anyone is curious, here are statistics to balance this dismal showing. As of mid-2013, there were 1,760 individuals with wealth of over US $50 million and 770 individuals worth more than USÃ”Ã‡Ãª$100 million.

Perhaps, it should not come as a surprise then that our Parliament, both Lok Sabha and Rajya Sabha, and our state legislatures are stocked with crorepatis, many of these qualify as dollar millionaires. It is a trend that set in in the past decade and has been reinforced by the recent state elections in Delhi, Rajasthan, Madhya Pradesh, Chhattisgarh and Mizoram. Almost every second candidate contesting the state elections was a crorepati and in Mizoram 53 per cent of the candidates was in this bracket with average assets coming to `2.32 crore. The figures come from the Association for Democratic Reforms (ADR) and the constituent state organisations which scrutinise the nomination papers filed by the candidates with self-sworn affidavits. Cynics would emphasise that this is only the declared wealth, not the whole caboodle.

What’s more interesting is that even the fledgling Aam Aadmi Party (AAP) betted on a sizable number of crorepatis. Of the 70 candidates it fielded, 33 were in this category but much lower, naturally, than the BJP (58 out of 68 candidates) and the Congress (61 out of 70). In the event, the common man’s dream party ended up with 12 of its crorepatis in the legislative assembly out of its tally of 28. In every election, the average assets of the contestants are increasing significantly and in some states doubling. It only reinforces the conventional belief that parties bet on candidates with sizeable assets because their chances of winning are rated much higher. What is surprising is that AAP, too, banked on this understanding of Indian politics while choosing its candidates. In fact, one of its MLAs Veena Anand has liabilities of Rs 7.60 crore. According to ADR, the chances of success for crorepati candidates are as high as 26 per cent but a mere 7 per cent for candidates with low assets.

The more startling revelation in the ADR analysis of these state elections is that many of those standing for re-election have multiplied their wealth enormously. In Madhya Pradesh, the average asset growth for the 141 MLAs elected in 2008 who stood for re-election in 2013 was Rs 4.11 crore. The most outstanding example of wealth multiplication while serving as an MLA is that of the aforementioned Sat Prakash Rana. He was elected from Bijwasan in Delhi with declared assets of Rs 6.38 crore in 2008. By the time he stood for re-election in December 2013, his assets had risen by a cool Rs 105.51 crore to Rs 111.89. That’s a 1,653.76 per cent increase, reflecting amazing wealth management in the time of recession.

Why are no questions asked about how these elected representatives multiply their wealth so sharply—and so easily? We could all do with some tips.