The Gangetic dolphin is an indicator of riverine health. Like the river it's in a bad way

A Hindu legend has it that the Gangetic dolphin was once a beautiful princess, called Sukanya. The princess was vain and onced earned the wrath of an ascetic. Sukanya had gone to take a bath in a river when the holy man asked her not to disturb him. The princess continued bathing. The enraged ascetic cursed her to a life in the river. The vain princess was turned into a dolphin, susaka.

Another Hindu legend describes the redemption of the creature. When the holy Ganga began its descent to the Earth, it used the dolphin's services. More than 2,000 years ago Emperor Ashoka declared the dolphin a protected creature.

Today along river banks, you might sometimes hear children shriek with delight as grey snouts emerge from the silty waters. "Susu," they cry, mimicking the noise the freshwater dolphins make as they surface for air.

But their joy is likely to be shortlived.

Once believed to be in tens of thousands, dolphin numbers have gradually declined to a mere 1,800 individuals and dolphins exist only in small fragmented sub-populations. It is aptly said, "As tiger is to the forest, dolphin is to the Ganga," because both are important indicator species and play vital roles in their ecological set-up.

But the government's conservation programmes do not have place for the dolphin. The government has never carried out a head count as is usually done for other endangered species like the tigers. Being at the apex of the food chain, the dolphin maintains a check on the population of the primary and secondary consumers, mainly fish and prawn. The fish population in the Ganga is known for its fecundity. If left unchecked their numbers can surpass the carrying capacity of the aquatic ecosystem. 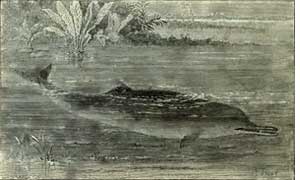 Imagine what might happen if the dolphin wasn't there. There will be competition among fish species for food, space and mate; which can lead to complete eradication of some fish species from the aquatic ecosystem. The organic debris will make the ecosystem more polluted.

An increase in fish population will put pressure on the zooplanktons and phytoplanktons. Decrease in the number of these tiny creatures will affect the oxygen regulation process in the ecosystem and result in an increase in the biological oxygen demand.

Similarly, the survival of the Gangetic dolphin is closely tied to the fortunes of the river and its ecosystem. But the construction of many barrages and dams has divided and restricted the colony of dolphins. Barrages like the Farrakha have restricted the movement of dolphins.

Irrigation canals in the Ganga river system may have brought prosperity to the river basin, but have proved to be a bane for the dolphins. Several large tracts of the river have become too shallow for the dolphins to survive. The creatures are now divided by dams into isolated groups with a limited gene-flow. And we all know absence of genetic diversity exposes populations to diseases.

Fishing is another reason for the decrease in dolphin's population. As the river dolphin is blind it cannot see fishing nets and get entangled. It is estimated that about 100 dolphins are killed annually in the Ganga and Brahmaputra. Fishermen are known to kill dolphins to use their fat to prepare fish bait. They also net them and slit them open to drain their oil, which is sold to cure "joint pains".

Dolphins only eat shrimp and fish from the river bottoms. But sand mining has put the bottom fauna and its predator in peril.

If urgent steps are not taken, the blind watchdog of riparian ecosystems could be on its way out.

Tawqir Bashir is a scientist at the Wildlife Institute of India, Dehradun