Chulhas—cookstoves of poor women who collect sticks, twigs and leaves to cook meals—are today at the centre of failing international action. Women are breathing toxic emissions from stoves and these emissions are also adding to the climate change burden. The 2010 Global Burden of Disease established that indoor air pollution from stoves is a primary cause of disease and death in South Asia. As many as 1.04 million pre-mature deaths and 31.4 million disability adjusted life years (DALYs)—measure of years lost due to ill-health, disability or early death—are related to exposure to biomass burning in poorly ventilated homes. 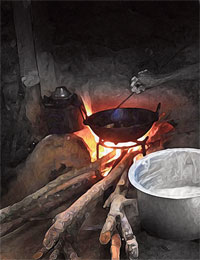 But what has spurred action is the science that there is a connection between local air and global air pollution. The particles formed during incomplete combustion—in diesel cars and cookstoves—are seen as powerful “climate forcers” because they absorb light and convert it into heat. It is also found that these particles or aerosols interact with clouds and affect rain pattern. They also fall on snow or ice surfaces and make them melt faster.

Moreover, particulate matter or black carbon is short-lived. Its life span in the atmosphere is three to eight days, unlike carbon dioxide, which has a life span of 80 to 100 years. So, combating emissions brings quick results to an over-heated Planet, even though their impacts are more regional and local. The current negotiations on climate change are focused on these short-lived climate forcers (SLCFs) as a way ahead.

This is not to say that science agrees on how serious the contribution of particulate matter or black carbon is to global climate change. This is because there are good aerosols, which cool the Planet by reflecting light—and bad aerosols, which warm the Planet.

What is emerging is that the good or bad could well depend on the source of pollution. While open burning or biomass burnt in cookstoves produces particles with a higher proportion of organic carbon that scatters sunlight, emissions from fossil fuel have a higher proportion of black carbon, which absorbs light and forces heating. Seen this way, use of low-sulfur diesel has the highest net positive radiative forcing—it warms, not cools.

Politics of particles, therefore, differentiates between survival emissions of the cookstoves of the poor and the luxury emissions of SUVs of the rich. This is where action on cookstoves is failing so badly. Currently, the world cares about cookstove because it sees them as low-hanging fruit in its fight against climate change. New cookstove models mostly involve efficient cooking contraptions, which use briquettes and other processed, hence monetised, biomass. This is not bad per se because such contraptions will also reduce exposure to toxic particles. The problem is since the push for action comes from the global climate change agenda, and not health concerns, solutions offered are half-baked and even counter-productive.

The fact is however much countries like India (and many parts of China and Africa) may have modernised, the bulk of cooking in villages is still done using firewood and twigs. In India, the National Sample Survey Office (NSSO) collects data on energy sources of Indian households for cooking and lighting. The findings of its data collection during 2009-2010 are shocking. In 1993-94, as many as 78 per cent households in rural India used biomass as cooking fuel and in 2009-10, 76 per cent used this fuel. Therefore, in this period, when urban India moved to LPG (from 30 per cent to 64 per cent), rural India remained where it was, cooking on highly inefficient and dirty stoves.

There is a definite correlation between wealth, availability and methods of cooking. The same NSSO data shows that only in the highest (9th and 10th) class of monthly per capita expenditure does the household make the transition to LPG in rural India. In urban India, in contrast, even households in the lower class of monthly per capita expenditure use LPG. This is because LPG is highly subsidised and available in these areas.

Therefore, it is poverty that is at the root of the chulha conundrum. This is where the climate change knots get entangled. The fact is that LPG is a fossil fuel widely available as a clean cooking medium. Advocating use of this fuel to meet the needs of poor women in vast parts of the world will only add to greenhouse gas emissions.

The other problem is that any programme to reach the poor will necessarily require subsidy. The world frowns on subsidy for fossil fuel—which is partly why our governments are scrambling to remove it from kerosene and even LPG. So, what is the way ahead?

Clearly, the option would be to first recognise that transition away from dirty cooking fuel has huge health benefits and must be supported with subsidy. If LPG is subsidised and made available to urban populations, then the same should be done for rural populations. If we want benefits for both health and climate, then the option would be to increase subsidy for cleaner electricity, from biomass gasification to solar energy. These are not cheap options. That is the inconvenient truth.