The city before the Taj 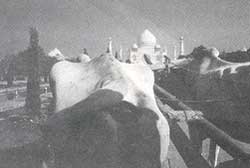 EVER since the public interest petition filed by M C Mehta has made waves in the media, a lot of people have assumed that the Taj is under threat from industrial pollution and shifting the industries is the only solution. Scientifically, the damage from industrial pollution is yet to be established beyond doubt. The entire issue of the degradation of the Taj has been reduced to propaganda by warring lobbies in the absence of credible scientific data. It is, therefore, imperative to quantify the pollution within the Taj trapezium (the area adjoining Agra, Mathura and Firozabad) and ascertain the liability of individual and groups of industries.

Of course, the issue of shifting industries out of Agra would have to be dealt with carefully. First, a good transport system connecting Agra to nearby towns where the industries are to be shifted needs to be built. Second, adequate power supply has to be ensured in the relocated areas. Finally, the government should sweeten the deal by providing the right incentives. For instance, a special 5-year tax holiday can be introduced for industries to be shifted. The businessmen need to be lured away.
Right now, the situation is at an impasse. The only way to get out of this mess is not to look at the Taj in isolation but also to consider the city of Agra, keeping in mind its people and their socioeconomic problems. So far, tourism authorities have focused all their attention on the Taj. Few have thought about Agra and its people. The city has hardly had any planned development. This is the main reason why the people of Agra do not empathise with the Taj. After all, how does the city benefit from it?

Most of the revenue collected from the Taj goes to the national exchequer and hardly anything is pumped back into the city for the benefit of its citizens. Its no wonder that the people of Agra are so indifferent. Unless you have the right to pluck the fruits from a tree that grows in your garden, you will not be interested in looking after it. The people have to be motivated to protect what they consider their own.

To motivate the people, a national decision can be taken to turn Agra into a garden city. Efforts in this direction should be driven by a single objective: to make sure that tourists visiting Agra stay there for a few days, instead of the usual 2 to 3 hours they spend at the Taj before returning to Delhi. The hotel industry has to be promoted for this. Restaurants and hotels could capture the glory of the Mughal era and provide entertainments such as light and dance festivals, thus ensuring that the tourists have something to look forward to in the evenings if they stay in Agra.
In fact, the whole area can be developed as a place of promoting traditional arts and crafts with the main city as a place where the artisans can have their workshops. There could be night shopping arcades like the Meena Bazaar of the Mughal times. The tourists can then explore the city and familiarise themselves with Indian heritage at every nook and cranny. All trades except those related to handicrafts should be banned from the city. Agra will soon develop a charm of its own. Destination Agra can then be marketed as a unique tourist package. The boom in the local economy will ensure the cooperation of the local people.

Apart from promoting the city for the benefit of the average tourist, the city, like Manila, could also serve as an international convention centre. This would provide a massive impetus to the service industries and generate a handsome revenue which can be utilised for further development of the city. As a corollary, the people would automatically see the need to protect the Taj.

Of course, all this cannot happen overnight and the economics of this scheme has to be studied thoroughly. However, for this scheme to work, it is necessary to design a master plan for Agra. Any step to protect the Taj without considering its socioeconomic settings would be a futile effort.