The desperation of farmers 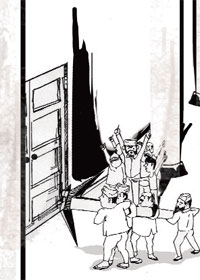 Farmers are caught in a vicious circle of problems that could spell the doom for agriculture but does Sharad Pawar or anyone else care?

Some weeks ago I got a call from Rama Rao, a farmer from Andhra Pradesh and a complete stranger. Not one but several calls, and there was an undertone of desperation in what he had to say. Rao is from Amalapuram in East Godavari district, and he was calling about the forced crop holiday that paddy farmers in the state, particularly in the coastal district, had been forced to take this kharif. A bountiful harvest the previous season had, sadly, led to distress sales by farmers across the state, with huge mounds of paddy piled up in their backyards, nearby schools, panchayat offices and godowns. Rao had heard that Down To Earth was focusing on the critical issues facing agriculture and he was hopeful that we would take up the current crisis with “people in Delhi”, a euphemism for the Central government. Please help farmers, was his plea. Instead of the minimum support price (MSP) of Rs 772 per bag, Rao, like fellow farmers, had got no more than Rs 620. None of them had recovered costs and the enforced crop holiday was their way of telling an indifferent government that they were in dire straits.

How does one tell a farmer that such a step was hardly likely to move the authorities when the epidemic of suicides that has swept over the country since the late 1990s had not? Close to 200,000 farmer suicides have been recorded since 1997 but precious little has been done to address this unparalleled tragedy. Farmers still take their own lives, and the graph of indebtedness has not changed either. Nearly half the farm households in the country are burdened by debt.

Presumably, Union agriculture minister Sharad Pawar knows exactly what the situation is even if farmers accuse him of being more interested in the wellbeing of the ultra-rich cricketers than of indigent cultivators. But given the response of Krishi Bhavan to the snowballing crisis in agriculture, the farmers could be excused for thinking that Pawar and fellow policymakers—in the Cabinet and specially so in the Planning Commission—have but a limited understanding of the complexities of agriculture and the linkages between various policies.

Some of the questions that farmers have thrown at this writer during travels in the farming belts of Andhra Pradesh, Odisha, Maharashtra and Kerala reflect their deepening frustration with Krishi Bhavan’s imperviousness to the gnawing concerns of farmers. Has the minister or the mammoth agriculture establishment that he presides over done any research on the threats from dramatic changes in weather? Does it look at the specific needs of the huge number of agro-climatic zones and subzones (127 in all) when it prescribes a single high-tech solution for the entire country?

Has it done a study yet of how NREGA impacts agriculture costs? Does the ministry have answers for the shortage of labour at critical times of the weeding-sowing cycle that affects even small farmers? Can it explain why procurement cannot be more responsive to production peaks in a certain region so that farmers do not suffer when there is a glut? And if there is a good harvest, why is it that decisions are invariably delayed till the millers/traders have made a killing? Why is it that MSP fails to keep pace with the rising costs of cultivation although a bloated and inept bureaucracy has been maintained for decades just for this purpose? Why were fertiliser prices decontrolled in the absence of an administrative machinery to ensure that supplies would not be affected and that prices would not go through the roof? Take any aspect of farming and what emerges is a problem of daunting proportions.

Last fortnight, there was another indication that farmers are at the end of their tether; they were seeking legal remedies. On 16 September, the Supreme Court asked the agriculture ministry to respond to a public interest petition that sought to improve the viability of farming by ensuring a decent income for farmers. The court was responding to a petition filed by Consortium of Indian Farmers Associations, which sought the implementation of national policy for farmers based on recommendations of the National Commission on Farmers.

That report was accepted by Parliament in 2007 but nothing ever came of it. Ensuring a decent income for farmers is vital for sustainable agriculture. Farmers are so busy trying to keep their heads above water that they have no time for the larger, critical issues that will ultimately spell the doom for agriculture in the country. Such as environmental concerns, such as the quality of the food they produce.

Do they realise that the rampant use of weedicides to tide over labour shortages will ruin their farmland? Do they understand that monoculture induced by high-tech seeds will inevitably reduce soil fertility and lead to a higher incidence of pests and result in a vicious circle of higher pesticide use? Perhaps, they do. At the moment they couldn’t care less.