The endgame at Cancun 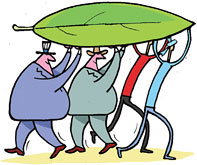 As I write this, some 24 hours are left to finalise the agreement at the 16th Conference of Parties to the climate change convention being held in Cancun.

At this moment it seems the predictable deadlock in talks will continue. Like all other global climate meetings, the world remains deeply divided on the matter of how to cut emissions of greenhouse gases that even today determine economic growth. Not much is expected to happen at the beach city of Cancun.

But this assessment borders on the simplistic. Over the past three years—since the meeting held in Bali—much has changed in the negotiations and much will change in Cancun. In the past years developing countries have done all they can to break the deadlock; they have budged from their held positions, they have been proactive in international negotiations and they have developed a domestic agenda for climate change mitigation. But each forward shift in the position of the emerging world has only meant a backward slide and hardening of position of the rich countries. Worse, there has been aggressive and often clandestine movement to shift the very nature of the global climate agreement to suit the US. This is the endgame of Cancun. We need to understand this.

2007, Bali: The draft resolution asked for deep emission reduction cuts from the industrialised world—up to 20 per cent by 2020. The US was rigid in its stance that it would do nothing within a legal framework and nothing till China and India were similarly committed. There was much at stake as the world climate was clearly heating up. There was pressure to act. By now the global (read western) media had successfully painted China and India as the villains in the climate pack. They had shifted public opinion away from the historical and rising pollution of the US to the chimneys of Beijing.

The developing world made a drastic shift in its position to bring the US on board. One, it agreed to a separate regime for the US based on its domestic actions that would not be legally binding. Two, it agreed to take on national actions to mitigate emissions, but underlined that these would have to be enabled by technology and funding. It also agreed that the supported actions would be subject to an international regime for monitoring and verification. The world was given two years to firm up this action plan.

2009: By now it was clear that the Democratic government of Obama was not different from its predecessor Bush’s. It was only more visible and more determined to have its way. The bar of compromise was shifted again. The concession made by the developing world at Bali was brushed aside as too little. The shrill call went out: China and India and others in our part of the world should state their emission reduction targets. Nobody asked what was the target the US was willing to put on the table. The pressure was on us to respond. It was also repeated that we were the deal breakers. India and China wanted growth at all costs. This line was fed to and swallowed by many Indian commentators and politicians alike.

So we caved in and complied once again. India put out its energy intensity reduction target and a national action plan on climate change. China went aggressive in building a renewable energy portfolio. Brazil went on to cut its rates of deforestation. All this was done without any matching commitments from the US. The US continued to commission and build coal-based power stations and increase its gas-guzzling vehicle fleet.

2009, Copenhagen: By now the goal posts had been shifted again. The Obama administration made it clear: nothing or all. It also stitched up a coalition of the willing with the Bush-like motto, “with us or against us”. At this meeting the terms of the new agreement were revealed. It was simple: no global agreements would be legally binding on the rich countries. Instead, there would be one agreement for all. This would be based on domestic actions, not determined by historical emissions but by the willingness of each country to act. But all these actions would be measured, reported and verified. It would internationalise domestic actions. There would be no distinction between the industrialised world and the rest. There would be no promise of money or technology. All this added up to a weak and effective deal, designed by and for polluters.

In Copenhagen, in spite of the Obama touch (he came, bullied and charmed), there was no agreement on this non-deal. Now in Cancun the negotiations are designed to move the pieces ahead. The goal is clear: by the next meeting in Durban all opposition to the new deal should be removed, even at the cost of making the world bleed.

But the question remains: now that the US has got the world to sink even lower in its expectations for an agreement that will be effective or equitable, will it honour its side of the bargain? Till now there is little evidence to suggest that it will take on emission reduction targets commensurate with its historical responsibility. Till now there is every evidence that it will wreak the agreement and then walk out of doing even the little it has promised.

Then why should the world give up its chance to build an agreement on climate that will work effectively? Why?