Middle class-driven anti-corruption campaign does not acknowledge the poor

Middle class-driven anti-corruption campaign does not acknowledge the poor

Everyone expects a campaign to reach its logical end. This is the right time to take stock of the ongoing anti-corruption campaign in the country. Since May 2011, the campaign has undergone more changes than its target, the government. First, it was a platform for the undefined civil society that precipitated the division between the civil society and the political class. Then, it resulted in the formation of a political party. Lastly, it has created a general perception that the culprit is the system. Anti-corruption campaigners now talk more of systemic problems. This is because cutting across party lines, governments, Central or state, continue to shock us with scams. And in all this, the future of the sutradhar of the campaign—the Lokpal Bill—remains uncertain.

Where do we head from here? It is difficult to give an honest answer. The campaign has created a situation where you are with it or not. But nobody would say “I am not with you” when it comes to an anti-corruption campaign. Despite this polarisation, one needs to objectively assess the campaign, particularly its supporters and their mood after more than a year of relentless campaigning.

To begin with, the campaign has completely kept away corruption’s worst victims, the poor, particularly those in rural areas. The three big scams the campaign brought in the public view—spectrum allocation, coal block allocation and land deals—do not make much sense for the rural poor. Arguably, the money saved from these scams would have been spent on rural programmes. But the rural people will not buy this argument given that India currently spends Rs 1,50,000 crore annually on rural development. In every state, there are reports on large-scale corruption with steep hike in government spending. The rural poor still fork out 20-30 per cent of their earnings to bribe officials to access basic amenities. In the past one year, scams worth Rs 50,000 crore related to rural development programmes have been investigated. Parliament has not come to a standstill over it. The civil society-turned-political campaign has not generated much heat on them. Small wonder then that in elections-bound Gujarat and Himachal Pradesh, opinion polls by various media outlets identify price rise and basic amenities as key issues, much above corruption. 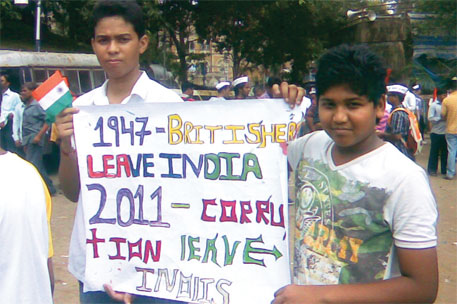 This confirms that the current campaign is middle class-driven and may not last long. Such a case creates a peculiar situation for the middle class. All the big scams originate from the government’s liberalisation process and a belief that private players are more efficient than government entities. The middle class overwhelmingly supported liberalisation and privatisation. The cheap mobile telephone rate, expansion of private power and boom in property price support this conclusion. Discretionary allocation of resources as well as policies made everything cheap for the middle class while filling private coffers.

Not far in the future, the situation will change. Auction is the mechanism now. It will fetch more money for the government, but services will also become expensive. Given that price rise, along with cuts in subsidised fuels, now hits the middle class, will it oppose liberalisation and privatisation as the root cause of the systemic problem? More importantly, will the rural population join the campaign? They vote the most in elections. If they support the anti-corruption campaign, it will truly become pan-Indian. But currently they do not have incentives to do so. As election analysts point out, for the past one decade people have been voting for efficient service delivery, both at state and Central levels. Populist schemes promising basic amenities fetch more votes than an agenda of systemic change to weed out corruption. Odisha and Chhattisgarh are two examples. There is no dearth of corruption charges against the two state governments. Aggressive industrial agenda in both the states has resulted in suppression of people’s rights. But efficient delivery of a few promises like rice at low cost has ensured votes, while the middle class has been supporting the states’ industrial policies. This raises a big question: has the campaign divided the corruption agenda into rural and urban?

If history is an indicator of the future, the current phase will end with a cosmetic change. Remember Bofors, the high-profile campaign, though political but with substantial public support, against the ruling Congress government which resulted in only change of regime? Since then we have witnessed more scams in defence deals. In many states, regime changes have been the only logical conclusion of anti-corruption campaigns. One can argue in a democracy this is the minimum punishment citizens can sentence rulers to. But the current campaign has high stakes from both rural and urban classes. As many say, an anti-corruption campaign is better experienced than explained.