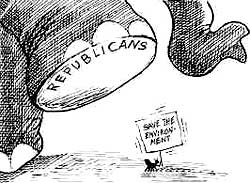 RIGHT now in the US, all eyes are glued on the presidential contenders for the forthcoming elections. Too bad, because (Bill Clinton being a jellyfish) it makes little difference who sits in the White House than which party dominates the Congress. One of the vital hinges in that difference is environment.

The starkness of the contrast between the Republicans and the Democrats has been revealed by a report on last year's Congress, recently released by the League of Conservation Voters (Lcv).

The LCV could rate members only by the extent to which they refused to participate in environmental plundering. By this standard, about one-fourth of the members - 111 in the House and 24 in the Senate - achieved an Lcv rating of zero - a perfect anti-environmental record.

Earning a zero meant, for example, voting to roll back safeguards on drinking water; to freeze peoples' right to know what toxics are emitted by factories in their neighborhoods; to stop listing endangered species; to sell off public lands; to drill for oil in the Arctic National Wildlife Refuge; to subsidise new generation nuclear reactors; to give away rights to minerals on public lands; to stop funding international family planning programmes programmes; and to slash the Environment Protection Agency (EPA) budget.

There are also heroes on the LCV list, almost as many as the zeroes. Twenty three Senators voted against every environ- mental attack and earned ratings of 100. All were Democrats. That was the Senate. There isn't enough space here to list the I I I zeroes and 62 heroes in the House, but if you'd like the list, call the LCV (202-785- 8683) or zoom on the Web to net them at http://www.Icv.org.

Senate Democrats averaged 89 on the LCV list, while Republicans scored 11. In the House, the Democrats averaged 76, Republicans 15. The infamous 73 fresher House Republicans started voting as a block for every environmental desecration, but later, eight of them declined to weaken the Clean Water Act; and by last fall, when the nastiest anti-environmental riders were going through, 13 of the freshers voted for the environment every time (36 voted against every time).

But partial heroes among the Republicans defied their party often enough to accumulate fair pro-environment records. These included Chafee with a rating of 37, Cohen: 7 1, Jeffords: 64, Snowe: 64 - all senators. In the House, Sherwood Boehtert managed to organise as many as 60 Republican votes for environment.

So, voting a Republican isn't necessarily voting for dirty air and murky water; it depends, on whether you have a "conservation conservative" to vote for! But if you help either house retain its Republican majority, you are handing power to a party whose hostility to environment and contempt for the voters' intelligence is deeply disturbing.

The best way by which that claim could be demonstrated is by quoting from the "Pro-Active, Pro-Environment Agenda" circulated by the House Republican leadership last October. It said, "As we all know, the environmentalist lobby and their extremist friends in the eco-terrorist underworld have been working overtime to define Republicans ... as anti-environment, pro-polluter, and hostile to the survival of every cuddly critter roaming God's green earth ... There are very real and very effective steps you can take in your districts to ... insulate yourself from the attacks of the green extremists."

Steps recommended were tree planting consider contacting local nurseries who may donate trees for the cause"), speaking at Earth Day activities, recycling in the office, cleaning up a stretch of highway - "have plenty of Supporters on cite (SIC) at the press conference", and visiting a local zoo.

"The next time Bruce Babbit (SIC) comes to your district and canoes down a river ... to tell the press how anti- environment their Congressperson is, if reporters have been to your boss' adopt-a-highway clean-up, two of his tree plantings, and his Congressional Task Force on Conservation hearings, they'll just laugh Babbit back to Washington," the report sings.

Then you can go ahead and trash the Clean Water Act, the Endangered Species Act, and the EPA - until your constituents decide that the air and water matter to them.