Since government cannot be trusted to protect Western Ghats, people should control it 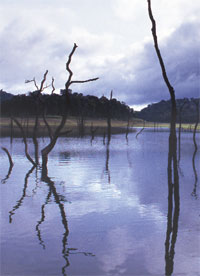 The irony is that it happened so close to the International Day for Biological Diversity. When the Union Ministry of Environment and Forests (MoEF) first developed cold feet about the Western Ghats Ecology Expert Panel (WGEEP) report and decided not to make it public it was September 2011. Following a protracted hearing of an RTI application, matters came to a head last month. But MoEF was determined that the report prepared under the chairmanship of eminent ecologist Madhav Gadgil should not see the light of day claiming it would affect the “scientific or economic interests of the states” along the 1,500 km long hill chain of resplendent beauty and unexplored wealth.

When matters came to a head early in May this year with the Chief Information Commissioner rejecting MoEF’s many ploys to keep the report “secret”, the ministry got succour from the Delhi High Court which countermanded a ruling by the Central Information Commission (CIC). In its April 9 order, CIC had set May 10 as the date for release of the Gadgil report, which, it pointed out, was prepared with public money and in public interest. “MoEF’s unwillingness to be transparent is likely to give citizens an impression that most decisions are taken in furtherance of corruption.” But that did little to embarrass a ministry which over the years has not been unwilling to bypass regulations and grant approvals to projects that have inexorably ravaged the environment.

The court order came less than a fortnight before the May 22 International Day for Biological Diversity, a day dedicated to increasing understanding and awareness of biodiversity issues. Instead, a contrarian MoEF was doing its best to keep people out of the loop on the preservation of an area that is verily the most prized in terms of biological riches.

The greater irony is that the MoEF’s subterfuges come just four months before it plays host to the 11th meeting of the Conference of the Parties to the Convention on Biological Diversity in Hyderabad. The biannual meetings are aimed at finding ways to stem the dramatic loss of biodiversity and the accompanying degradation of a broad range of ecosystem services. So while India is seemingly behind the global conservation drive, at home it is engaged in the practised art of making its great biodiversity riches disappear behind the illusory safeguards of the Environmental Protection Act and the Forest Rights Act.

What lies behind MoEF’s coyness on the Gadgil report? The answer is not hard to fathom: WGEEP has objected to most of the mining and power projects in the region which is not just extraordinarily rich in biodiversity—thousands of species are unique to this country—but is also crucial for the security of water resources of peninsular India. But what is important to remember is that the Western Ghats, like the Eastern Himalayas, is a hot spot or a biodiverse area that is under a high degree of threat.

Dividing the Western Ghats into three categories depending on their ecological sensitivity, WGEEP has suggested that environmental clearance should not be given to large-scale storage dams or mining projects in zones I and II, and recommended phasing out of activities in zone III.

But the most significant point is the report’s neatly argued case for putting people in charge of protecting the Western Ghats. WGEEP notes that “we are stuck in a system that forcibly divorces conservation from development. It ends up creating a dichotomy so that our policies at once promote reckless development in certain areas, and thoughtless conservation in other areas. In the process we constitute islands of biodiversity (and social exclusion) in an ocean of ecological devastation…” It calls for a reversal of the situation in which majority of people are excluded from the fruits of, and decisions relating to both development and conservation.

To sum up, WGEEP advocates a participatory approach—a recommendation that is unlikely to sit well with the government. But if the appointed custodians of the country’s natural wealth cannot be trusted to protect a unique heritage, then surely the best thing would be to let the people handle it?

I will leave readers with an unexpectedly poetic passage from the report, at once lyrical and terrible. Recalling Kalidasa’s paean to this lush forest that the poet had likened to a charming maiden, WGEEP report laments: “Once the lady was adorned by a sari of rich green hues; today her mantle lies in shreds and tatters. It has been torn asunder by the greed of the elite and gnawed at by the poor trying to eke out a living.” This is a great tragedy, for this hill range is the backbone of the ecology and economy of south India.
WGEEP Western Ghats Right to Dissent Ministry Of … Ministry of … Latha Jishnu India Environment Ecology Ecology Convention on … Biodiversity Conservation Biodiversity
Donate Now