The great Indian monsoon and its friends

Henry Ford, the founder of Ford Motor Company, once said, “My best friend is the one who brings out the best in me.”

This fact is observed not only in our daily lives, but also in the case of the Indian summer monsoon’s (also called southwest monsoon) performance every year.
The southwest monsoon is so powerful that its performance from June to September decides the state of agricultural productivity in India, which in turn, decides the state of the economy. Thus, it is no less important than the finance minister himself.

Just like the performance of the monsoon is often compared to a game of cricket, one can also compare it to friends (here it means various atmospheric and oceanic conditions).

We gauge only the performance of the monsoon, but in reality, its friends are also working round-the-clock in the background to bring out its best performance.
However, the twist in the story is that some of monsoon’s friends are prone to changes. They can even become its enemies in a particular year and bat on behalf of the opponent team.

It is this mutability which causes variations in monsoon’s performance and hence, no two monsoons are similar in nature.

Five special conditions
The Earth System Science Organisation (ESSO) and the India Meteorological Department (IMD) take into account five conditions while making forecasts about the monsoon in April every year.

These special conditions are as follows:

Here are some friends of the Indian monsoon which are responsible for its existence and good performance over the years. 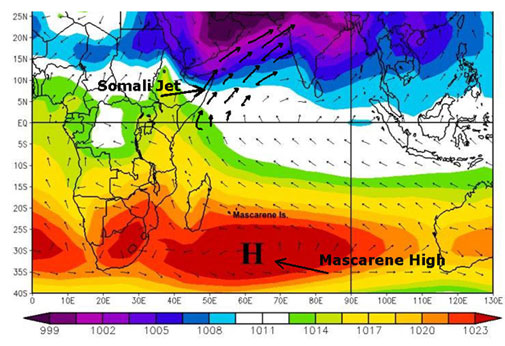 The southwest monsoon derives its name from winds which blow from a south-westerly direction in the Indian subcontinent. We often read about “southwest winds” in various news reports or weather forecasts. But rarely do we think about the "source" of these winds. These come from a powerhouse located more than 4,000 kilometres from India. This powerhouse is known as the Mascarene High. This high-pressure region is located between 25°S-35°S and 40°E-90°E near the Mascarene Islands in the southern Indian Ocean.

Normally, this high-pressure region starts forming by mid-April and its strength is an important factor which determines the intensity of monsoon in India.

A stronger high pressure will produce stronger winds or monsoon current. If there is a delay in the formation of Mascarene High, there is also the possibility of a delay in the onset of monsoon in India. Mascarene High has been a subject of research for many years. Most research says that its strength is determined by the happenings in the Antarctic region.

But overall, this factor is not often held responsible for delays and poor performance of the monsoon in India. As a result of its punctuality, Mascarene High is considered its best buddy.

Here, the topography of Somalia deflects the winds towards the east. Also, after crossing the equator, these winds experience the Coriolis Effect.

Coriolis Force is a pseudo force which exists only because of the Earth’s rotational effect. Rotational motion observed in a tropical cyclone is also due to this force. Hence, these monsoon winds get deflected eastwards and now they blow from south-west to the north-east direction. They split into two branches—the Arabian Sea branch and the Bay of Bengal branch.

See the motion of these monsoon winds on June 21, 2014, here.
In this graphic, the green-coloured moving star trail-like features are the winds at the surface level. Notice how they come from the southern hemisphere and then get deflected eastwards in the northern hemisphere. As the Earth’s rotational velocity is constant, the Coriolis Force experienced at a given latitude by a given parcel of air having a definite velocity is also constant.

That is why the Coriolis Force is monsoon’s trusted friend. 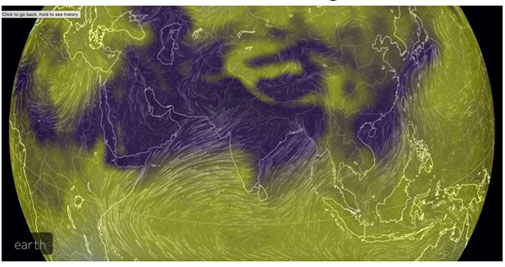 A mechanism is needed to attract the monsoon winds from the Arabian Sea or the Bay of Bengal. We keep reading about tropical cyclones or troughs or low pressure regions which are great attractors of winds in the Earth’s weather system.

Winds flow from high pressure to low pressure areas. We all are familiar with India’s summer season or pre-monsoon season as defined by the IMD. The Himalayan range plays a vital role in summer heating by restricting the intrusion of cold air from the north and allowing heating to occur. It is during this season that the land of India, particularly Rajasthan and surrounding areas (Gujarat and also Pakistan) heat up extensively. The seas surrounding the country also see a temperature rise. As a result of the differential heating rates and capacities of air over the sea and the land, we observe a gradient between air pressure over the sea and that over India (especially Rajasthan). The air pressure over India is lower than that over the southern part of the Arabian Sea and the Bay of Bengal. This acts as an attractor mechanism for the monsoon winds.

Thus, the summer season of India acts as the monsoon’s guide.

El Nino Southern Oscillation (ENSO) refers to the oscillatory mode of the sea surface temperatures near the equatorial Pacific Ocean in which a warming (El Nino or cooling (La Nina) or neutrality is observed. Due to its mostly unpredictable nature, ENSO has been a big challenge for forecasters since a long time. Even trusted models have failed many a time.

Take the case of last year. Right from February-March, there were many instances during which the models indicated a moderate to high probability of El Nino formation, but it did not turn up till almost the end of 2014.

This was because the atmosphere and the ocean could not synchronise in most of the cases.

But things started getting organised better as 2015 kicked off and El Nino conditions started appearing in the western and central equatorial Pacific Ocean since February.

As a result of this, the Climate Prediction Center/NCEP/NWS and the International Research Institute for Climate and Society issued an El Nino advisory in March 2015.

Their April discussion suggests that “there is an approximately 70 per cent chance that El Nino will continue through Northern Hemisphere summer 2015 and a greater than 60 per cent chance it will last through autumn”.

ENSO has been a driver of global weather (particularly in countries surrounding the Pacific Ocean) as it affects atmospheric circulation. 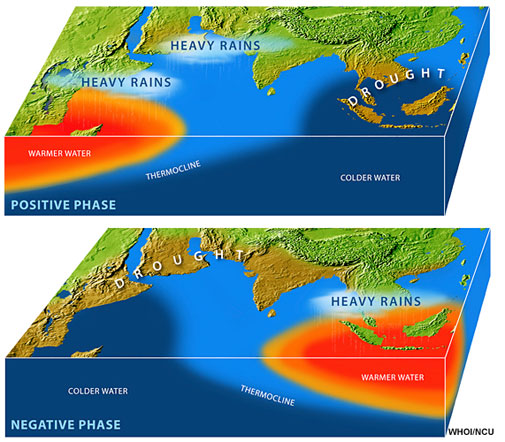 Like ENSO, IOD also has three phases—positive, negative and neutral. During the positive phase of IOD, sea surface temperatures are warmer in the western Indian Ocean (which gives a boost to monsoon winds) as compared to the eastern Indian Ocean—hence a dipole nature.

The reverse happens during IOD negative and no gradient is observed during the IOD neutral period.

It has been observed that during the period of positive IOD, the Indian summer monsoon rainfall is considerably good as compared to the negative IOD period. Despite 1994 and 2006 being El Nino years, India did not witness a drought as IOD was significantly positive. Thus, in some ways a strong positive phase of IOD tries to counter the negative effects of El Nino. But the relation between IOD and monsoon rainfall is still being debated and has not been fully comprehended.

Compared to the roles of Mascarene High, Coriolis Force, India’s summer season and ENSO, IOD’s role has been discovered recently.
It will be interesting to see how these parameters evolve in the ongoing pre-monsoon period.