The idea of corruption

Anna Hazare and his followers have a skewed notion of corruption. Would they ever see the Bhopal gas tragedy as the symptom of the problem? 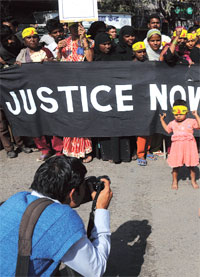 The government’s initial contempt and arrogance for Anna Hazare’s protest turned into craven pandering as his hordes made a carnival of it in Delhi’s Ramlila Maidan. One was troubled by the fate of other protesters who have received short shrift—the small, the struggling and much suffering denizens of this country whose voices are seldom heard or are stifled in most cases. These are voices that speak of the institutional decay that has resulted in the corruption eating into India’s innards.

Voices such as those of the victims of the Bhopal gas tragedy whom I would number among the major casualties of the sapping governance deficit in India. Listening to the pronouncements of what we are told is a newly awakened and frustrated middle class that is the backbone of Hazare’s movement it is curious how corruption is perceived. In the fixed imagination of Camp Anna, corruption is reduced to a listing of the huge sums looted in the various scams: Rs 1,70,000 in the 2G spectrum, some Rs 18,000 crore in the Commonwealth Games. There is hardly any thought as to how and why corruption has become the headline issue of our times.

Is a prime minister who has lied brazenly about his place of residence to get into the upper house of India’s Parliament any less guilty of corruption or is he just subverting the system? It is really odd to hear the endless refrain that Prime Minister Manmohan Singh is “personally of irreproachable integrity”. That would strike any foreign observer of our curious politics as completely absurd. But that is our way of looking at corruption. Lack of safe drinking water to the citizens is never seen as the fallout of corruption. Or that the shady laws that allow companies, in concert with bureaucrats and politicians, to plunder natural resources are also a major form of corruption. Does it ever strike the newly minted crusaders against corruption that the solution might lie in getting Parliament to be less somnolent to the laws and systems that are being fashioned to protect vested interests such as on land acquisition, seeds, water privatisation, crops and technology regulation? That MPs should be allowed to speak and act independently instead of being cowed by party whips?

But let us come back to the Bhopalis and the politics of protest and redressal. I saw them, these victims of the world’s biggest industrial disaster, for the first time some five years ago. A raggedy group of men and women who had trudged over 700 km from Bhopal, footsore and weary, holding up a black banner that established their cause. All they wanted was to meet the prime minister and other officials dealing with the aftermath of the 1984 tragedy. Thousands had died and more than thrice that figure were suffering chronic ailments and cancer. They had received little sympathy or financial assistance. Not from their governments, not from Union Carbide or its new owners, Dow Chemical Company, and least of all from the Supreme Court.

The gas victims, like all protestors, invariably headed to Jantar Mantar, Delhi’s crowded pavement of lost causes. Here in makeshift camps they are (or were) allowed to engage the rulers, lawmakers and the media. In the Lottery of Causes, some would end up consistently unlucky. A hundred thousand deadbeat workers from the forgotten provinces can march through Delhi and never get a mention in Parliament or in the media. One year, the Bhopalis were obliterated by the buzz around the shamiana where Medha Patkar was on a fast to press the demands of her Narmada Bachao Andolan (NBA). Ministers came and so did celebrities (Arundhati Roy among others), ensuring that there was a constant buzz at the NBA camp while the ragtag group crouched on the opposite side of the pavement, could only look on forlornly. Eventually the prime minister did relent and give them a 10-minute audience.

In 2006 and 2008, when they made their third padyatra to Delhi, their main demand was for clean drinking water. Even the children who had escaped the effects of the deadly poisons imbibed by their parents two decades ago were falling victim to a range of ailments on account of the toxic drinking water. It was only in 2010 that steps were initiated to give them safe water. At another time when Delhi was preparing for what has turned out to be the infamous Commonwealth Games, they were given office hours of protest, 10 to five, because overnight camping would damage India’s image. Old troopers like Rashida Bi and Champa Devi Shukla of the Bhopal Gas Peedit Mahila Stationery Karmchari Sangh must be looking at the Ramlila hospitality desk with great wonder.

There has been tonnes of food, toilet facilities; there’s been media overkill and, best of all, a political victory for Camp Anna. How come the Bhopal issue never made it to the top of the corruption charts?