The joy and the spoilsport 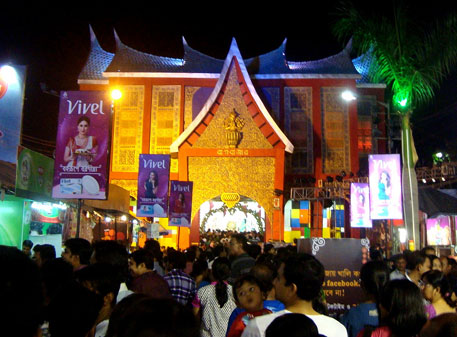 The festive season has begun. The time of the year many of us look forward to. I certainly do. For the four days of the Durga Puja, my atheism takes backseat as I try to sneak out time to catch up with old friends, gorge on goodies and, yes, allow myself to get dazzled by the fashion parade.

I don’t always manage that. It seems there are many like me for whom the Durga Puja turns out to be a no-show, sometimes year after year. But it also seems that the carnival is mocking this increasingly growing tribe of absentees by getting flashier. For every unfortunate one who has missed out on the fun, it seems there are 10, perhaps even 50, who wore the brightest clothes and drove to, not one or two, but several puja pandals in the city, having braved Delhi’s clogged roads and having withstood a mini assault on the respiratory system.

At a few points in the day, the usually lovely autumn sky turns smoggy and grey. But then who is looking at the sky when there is resplendence aplenty inside the puja pandals.

A lot of the spectacle derives from the food stalls. The gastronome Bengali is spoilt for choice. There is the traditional fare of Mughlai paranthas, kebabs, biryani, meat and fish curries, phuchkas and sweets. There are also new age fast foods: chowmein, burgers and chips. In fact, at some places ice creams seem to have displaced the traditional sweets. And then there are soft drinks.

Plastics have taken over the traditional earthenware and leaf plates, increasing the footprint of merrymaking. Some sociologists and commentators see all this as a fallout of decline of communities. Durga Pujas, according to this school of thought, were community and neighbourhood affairs and since people had an interest in keeping their neighbourhoods and localities clean, they tried to keep the impacts of the carnival low. As low as possible.

There is a lot that is salutary about this understanding. The increase in Durga Puja extravagance has gone hand-in-hand with the erosion of traditional communities. About 20 years ago, in Delhi, people spent a major part of the puja days in neighbourhood bonhomie with a day usually reserved for a tour of the major pandals of the city in a bus arranged by the local puja committee.

The bus tours are not completely a thing of the past. But the personal vehicle is now the preferred mode of pandal tour. This is where I believe another hypothesis is more accurate. Communities haven’t fallen aside. The personal vehicle, in fact, has given impetus to newer kinds of communities, one across kilometres. It’s a bond sealed by that very Bengali pastime called adda, where matters as diverse as stock market fortunes, politics, art and sports are put to scrutiny over copious amounts of tea—unfortunately sometimes soft drinks today—and superhuman feats of gluttony.

But communities are not just about cooperation and bonhomie. They exclude, they marginalise, they exact. While the carnival is at its pinnacle, an almost invisible army of cleaners is hard at work, sweeping away its detritus. Across the city, regiments of ill-paid scavengers make sure the muck and debris don’t mar the celebrations. The relative cleanliness of the Durga Puja of yore owed much more to labourers than to the much-lauded community drive of keeping neighbourhoods clean. And their labours ensure that the most visible part of the Durga Puja is its glitziest one.