The loss of our breeds

Buy an Indian breed from Australia 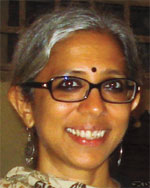 In June last year, we visited Malaysia on the invitation of the country’s oldest and most active consumer action group, The Consumer Association of Penang, to study the livestock production systems and to advise on how these can be transformed into more sustainable and less industrial farming systems.

The past 40 years of aggressive industrial growth in Malaysia has seen small-scale peasant agriculture and livestock rearing being virtually replaced by a highly industrial and commercialised system of “livestock commodity production” and “crop commodity production”. While Malaysia is proud of being supposedly self-sufficient in poultry and pig production, it is not really so. It is highly dependent on imports of animal feed and breeds to sustain these factory-farmed animals. Farmers are utterly dependent on companies (both local and foreign) for the supply of animal germplasm, and a few farmers continue to control the “genetics” of their herds and flocks.

In India, we are rapidly moving in that very direction, with the blessings of our government’s plans and policies.

On our visit to Malaysia, we were intrigued when we came across a cattle breed, which the farmers kept referring to as “the Brahman”. This was a complete mystery to us. Which Brahman came to Malaysia and named these cattle the Brahman?

We finally got to see the breed on Punyavati’s farm. Punyavati is a young ethnic Tamil Malaysian farmer, descendent from a family of Tamil plantation workers. She inherits a small plot of land and a herd of cattle from her grandmother and mother, and continues to practice mixed crop-livestock farming. She rears the indigenous Malay cattle breed, such as the Kadah-Kelantan and the Brahman.

The Brahman looked like a typical humped Indian breed resembling the Ongole and the Gir. How did it reach Malaysia? Did the poor plantation workers from Tamil Nadu bring it with them when they were shipped across the oceans by the British to work on Her Majesty’s rubber plantations? If this was true, then the breed should resemble one of the several breeds of Tamil Nadu, like the Kangayam or the Malai Madu? But it does not. 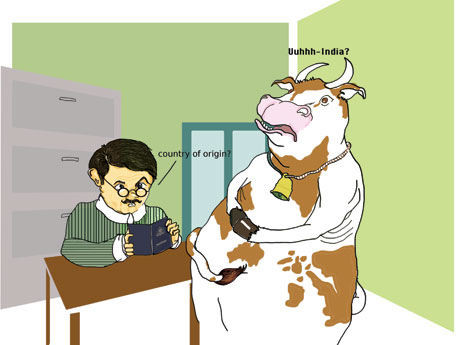 On our visit to the government’s Department of Veterinary Services in the state of Selangor we saw photographs of the Grey Brahman, the Red Brahman and the Nellore—all part of a poster on cattle breeds of Malaysia. Not to mention that the Jamunapari goat also featured in the poster as a goat breed of the country. This intrigued us even further, but none of the veterinary officers could explain how the Nellore from Andhra Pradesh and the Jamunapari from Uttar Pradesh happened to figure in a poster on the breeds of Malaysia.

Back home, we researched and discovered that the Brahman breed is a product of biopiracy of several Indian breeds, which occurred over 100 years ago, when India was a colony of the British Empire, when “pirates” of today’s “Empire”—and modern day “Brahman”, the US—spirited out a nucleus of approximately 266 bulls and 22 females of several Bos indicus (Indian cattle), imported them to the US between 1854 and 1926, and developed the breed.

According to the literature, the Brahman is the progeny of four Indian cattle breeds: the Kankrej and Gir from Gujarat, the Ongole (earlier known as the Nellore) from Andhra Pradesh, with the fourth breed being the “Gujarat”. But no such breed exists in the list of Indian cattle breeds.

The Brahman has become the most popular beef cattle breed in the southern parts of the US and in South America, Asia, and Australia because of its excellent adaptability to sub-tropical climates and its production abilities.

Brahman-type cattle were, in fact, imported to Australia from the US, and today the Australian Brahman is the mainstay of the northern beef industry of Australia. The Brahman in Malaysia has primarily been imported from Australia, which has a virtual monopoly in exporting the breed to several south-east Asian countries. So much so that Malaysia’s beef cattle industry is completely dependent on continued import of the Brahman from Australia.

It is shocking that in India we continue to have animal breeding and development policies that target the replacement and upgradation of our indigenous breeds with exotic Holstein Frisians and Jerseys, which ironically are imported from Australia and the US. This, thereby, dilutes our breeds to such an extent that today the mighty Ongole is on the list of threatened breeds of the country.

Our indigenous breeds are those which were stolen from our country to develop a breed (the Brahman), which today supports a multi-million dollar global beef industry spread across Australia, Brazil, the US and other parts of Asia. While the North Americans, the Australians and the Brazilians rake in the profits of this breed, our Indian policy makers and scientists, who should have been in the forefront, demanding repatriation and payment (with interest) from these developed countries for this act of theft, are complacent in supporting the continued replacement and erosion of our breeds. These scientists and policy makers call our breeds “unproductive” and the Pashu Kranti schemes, announced by the prime minister and chief ministers to help farmers in distress, continue to dump Holstein Friesians and Jerseys onto our poor unsuspecting farmers, pushing them into further debt and disaster.

The National Biodiversity Board continues to mouth platitudes about conserving breeds and bemoaning the loss of genetic diversity. The Union Ministry of Environment and Forests wastes its time formulating guidelines for access to genetic resources and sharing of benefits associated with their use, and hosting mega events in the run up to 2012, when India hosts the next Conference of Parties on Conservation of Biological Diversity. We demand that our valuable money is used to support farmers so that they breed and rear our indigenous breeds—the Ongole, the Hallikar, the Deoni, the Pandharpuri buffalo, the Asil poultry, the Deccani Sheep and the Kanchu Dwarf Goa.

We demand a complete halt of the import and dumping of useless Holstein Friesans, Jerseys and Boar Goats on to the farmers. It will be the ultimate irony if our next generation has to purchase an Ongole germplasm-look-alike clone from a company in Australia, Brazil or the US, in the event that our amazing indigenous breeds completely vanish from the face of this soil.

Post Script: I wrote this piece in June 2011, soon after we returned to India. Regrettably, no newspaper in Andhra Pradesh cared to print it. On May 15 this year I read an article in the Asian Age headlined “AP seeks royalty for the Brahman Bull”.

The article states: “Farmers from Andhra Pradesh and some other parts of India are, ironically, going to the World Brahma Bull Congress in Panama in July to buy Brahma bulls bred overseas. A Hyderabad-based non-profit Ankush had recently approached the board seeking to buy these foreign-bred Brahma bulls and seeking the animal husbandry department’s permission to import the cattle.”

I was wrong in my prediction. We did not have to wait another generation; it is already under way, while the government marches on undeterred to force farmers to replace their indigenous breeds of cows and buffalos with the exotic ones from the West.

Sagari R Ramdas is a veterinary scientist and co-director of Anthra, a non-profit in Hyderabad