The next decade or two are going to be rough. Conflicts of all kinds will increase. These will be over water, land, technologies, energy sources, geopolitical power, religion and science. We will lurch from one economic crisis to the other, and struggle to contain the impacts of the havoc we have wrought on the earth's climate.

Some forms of economic and ecological collapse cannot be avoided--we're just too far gone along our paths of unsustainability and greed. But even as we (especially the poor) suffer, we will have to put together the various straws we have been holding to make life-rafts. It is these straws that we must focus on however weak and scattered they may appear.They are

The traditions that still sustain us, such as ancient seeds and agricultural knowledge, or the recipes that containgenerations of wisdom in their balance of nutrients and taste. Many traditions have and will disappear, indeed many deserve to--such as the debilitating oppression of dalits and women. But in an inevitably modernizing world we cannot afford to throw out the baby of age-old wisdom with the bathwater of social exploitation; hence the importance of movements like the Beej Bachao Andolan, struggling to revive the Himalayan farmers' agricultural diversity.

We need to clutch on to the ideas of revolutionaries through the ages from saints who rose above the narrow-mindedness of orthodox religions to geniuses like Gandhi and Marx. Not everything they said or did may be relevant now, but there are gems that will last forever, such as Gandhi's warning that for India to emulate the west would result in stripping the world bare like locusts would do.

Then there is the work of thousands of communities across India, engaged in decentralized governance, local water harvesting, regeneration of forests and wildlife, slum upgradation. Also the work of thousands of civil society organizations with communities, helping with alternative technologies and livelihoods, locally relevant education and health services. These are still a blip in a landscape of rural and urban decay, but are flashes of hope. Some such examples are the bringing together of dozens of villages in Rajasthan's Arvari river basin to manage land and water, through a people's parliament; or the coming together of 180 forest-protecting villages in Ranpur area of Orissa in the face of timber mafia and government agencies.

There is hope in technological innovations. There are super-efficient devices that consume a fraction of energy their earlier counterparts did (example, bulbs) and methods to recycle almost all the waste we produce (this should not divert us from trying to reduce waste generation). 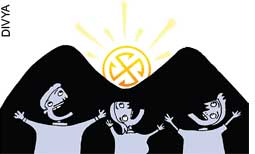 Perhaps the most powerful sign of hope is in political decentralization. The rapidly growing democratic aspirations of hundreds of millions of people, not only to be able to vote in free and fair elections, but to take part in the day-to-day decisions that affect their lives, cannot be trampled any more. Governments, corporations and elites will try, but they cannot prevail for long. Were it not for the dozens of anti-dam, anti- sez, anti-industry movements, we would be further down the road of unsustainability than we are.

Bold and sensitive initiatives by academics and activists close to the centres of power, and even by the exceptional government official has brought us the Right to Information Act, or the National Employment Guarantee Act. These are completely against the grain, for most other moves by the last three of four governments tended to reduce democratic choices for the poor.

There are, of course, many missing elements. India's media remains mercifully independent (at least compared to many other countries), but continues to focus on doom and scandal; it would do well to devote much more space to signs of hope. Many policies, such as those relating to natural resources, are not yet in tune with the new realities of decentralization on the one hand and global challenges on the other.

And we need a few new Gandhis and Marxes, who have the vision to craft all the straws together.

Ashish Kothari is with Kalpavriksh, Pune