Monkeys exact revenge on a naturalist

In 2008, I shifted from Pune to the green environs of Dehradun to follow my heart. Writing, photography and nature conservation projects followed, making life really interesting. One of the conservation projects I took up involved studying the conflict between monkeys and farmers in Uttarakhand. In many areas of the Himalayan foothills monkeys raided crops with impunity and ate everything in sight—grain, seeds, young shoots, fruit, leaves. In many places the damage to crops was in excess of 70 per cent, leading farmers to give up farming.

I encountered the conflict during one of my nature jaunts to the hills. Being a naturalist, studying monkeys seemed easy enough. All it needed was to locate the troop of monkeys and then follow it through the day. As I found out to my utter dismay, finding the monkeys was not so easy. Despite the farmers’ claims that they were everywhere, and ravaged all the crops, on the first day of my recce it took me two hours to find a troop of monkeys. Next came the relatively easy sounding job of following them through the day to observe them. The very first day was a disaster. After locating the monkeys, I found they fed on one hill slope and bounded to another, leaving me to scale a vertical rocky cliff. Or being forced to walk to half a kilometre around the hill slope to reach the monkeys only to find that they had already decided to move. Finally, with a bit of trial and error, and a lot of help from my guide Virender we figured we could predict which way they would head, based on terrain and food availability.

The study, itself, threw up many interesting encounters with people in villages. Initially, they thought I was there to catch the monkeys. So for the first few days I would be asked, “Kitne pakde? (How many have you caught?)”. I met many people to whom I explained that I had no intention of catching monkeys. By the third month I was accepted as the “monkey man” and people no longer wanted to know how many monkeys I had bagged. 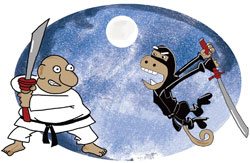 On another visit, a villager informed me that these “badly behaved” monkeys were not “our” monkeys, as earlier monkeys were not such a bother. They had been captured in the city and released in the village. In fact, he went on to elaborate that the latest lot of really badly behaved monkeys was definitely from Delhi. The monkeys, of course, did not enjoy me monkeying around. I was greeted with snarls and an occasional display of aggressive “branch-shaking”. On one occasion the monkeys decided to treat me as their guest and treated me to some walnut. Monkeys love their walnuts, but they throw away as many walnuts as they actually eat.

Despite their hospitality, the monkeys still got their revenge. After we gorged on loads of walnuts, I realised that the juice from the outer kernel of the raw green walnut had left a stain on my fingers. As time passed, the stain became more prominent, and eventually, I ended up with dirty yellow fingers. When I woke up the next morning, the yellowish stains turned blackish. Virender gleefully told me that the stains would take a while to come off.

To save the crops the villagers organised monkey chasers. Thirty households got together and paid two monkey chasers Rs 50 every month to chase the monkeys from their fields. One of the monkey chasers, Yudhvir, a surly fellow (who wouldn’t be surly after chasing monkeys all day long!), accused me of bringing the monkeys with me to the fields. I had to use all my corporate management behavioural techniques to convince Yudhvir that I was actually trying to help them understand the monkey problem and devise a solution.

During one of my study sessions, the monkey chasers were particularly vigorous in chasing the monkeys. With shouts of “ra-ra-ra-ra”, stone pelting and whistles, they chased the monkeys away. I could not help but notice the monkey chasers’ behaviour had become distinctly monkey-like. As man had actually evolved from apes, we were doing a pretty good job of regressing to a simian-like state!

Sanjay Sondhi is with conservation organisation Titli Trust in Dehradun