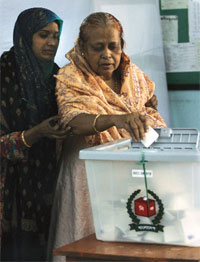 Bangladesh is holding multi-phase elections to its sub-district level local government, the upazilla parishad. It is an important local government with 17 constitutionally mandated functions. This tier of local government is also politically the most sought after. Though local elections in the country take place on a non-party basis, political parties do support candidates. For years, members of parliament have been trying to control this form of government and have been successful to some extent by exerting control over their functions. Thus, one would expect the local elections to be a politically charged affair.

But this time, their political importance seems to be much higher than in 2009. The main opposition Bangladesh National Party (BNP) and its allies boycotted the last general election held in January this year. This led to an almost unopposed second stint for the ruling Awami League. The Awami League government is widely called “self-appointed” because of the boycott. When the government declared polls for the upazilla parishad, everybody expected another boycott by the opposition. But in a political twist, the BNP and its allies decided to participate.

With the two national parties and their allies joining, the local elections have assumed the hues of a national election. This becomes evident as one travels across the country. Many feel the elections to the upazilla parishad have brought back the excitement of the national polls that was missing in January. There is hardly any talk of local issues. Leaders have rarely campaigned for problems such as food insecurity or loss of livelihoods owing to erratic climate. The opposition parties are leading the campaign with the agenda of throwing out the present “self-appointed” government.

The results of the polls from the first two phases till the first week of March are startling: the BNP and allies have won the majority of the votes. There are speculations that the election results are a negative verdict for the Awami League government. Many political experts have commented in newspapers that there will be agitation against the government leading to its ouster. As a farmer at an election meeting in Rangpur district said, “People missed voting in the last general election. I think we are now going national at the local level.” He was quick to add that there are differences between local and national issues and since upazilla parishad is a dead government, many are happy with the interest it is generating.

But not all. Associations representing the elected members of local governments resent the fact that the focus has shifted from the real issues to national politics. Bangladesh has been grappling with its decentralised governance system because of the lack of political commitment to it. Sub-district governments were introduced in 1982 but scrapped in 1991 and again revived in 1998. They have largely remained ineffective because of widespread interference from politicians and bureaucrats. Constitutionally, the upazilla parishads are to be governed by the elected members. But they have little say in governance as the advice of MPs is binding on them.

Over a period of time, the elected members have lost most of their power. For example, a sub-district gets around 500 million Bangladesh taka as the annual budget. Of this, the upazilla parishad gets to decide on just 15 million taka, while the MPs and the village government (union parishad) have the power to spend the rest.

By May, elections to the upazilla parishad will be over and all 487 sub-district governments in the country would be in place. The opposition party is expected to win by majority and in doing so send a stern message to the Awami League. But the many ills that plague local governance would not be debated, despite all the attention the ongoing elections are receiving. For Bangladesh, this is a wasted opportunity to streamline its governance system.