Today the Internet gives people a new voice as well the power to use it. People are communicating directly with government officials and community leaders 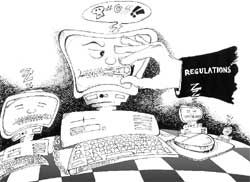 electronic commerce is the ultimate entrepreneurial vehicle, used by individuals the worldover, from artists in New Mexico to rug weavers in Morocco to basket makers in Botswana.

Moreover, the Internet has created new avenues of communication for those who have encountered high entry barriers in traditional media. One of the reasons is the easier access for content providers and thus content wanted by users.

A recent survey by Target Market News in the us found that compared with white households, African Americans spent more than two-and-a-half times more for on line services this past year, because these services are more valuable to the community.

No communications medium has ever grown so fast. No one has accurately predicted this growth. No one I know predicted three years ago that 82 million personal computers would access the Internet by the end of this year, with the business market leading this drive. Or that 2,700,000 million e -mails would be sent by the end of 1997. Or that by the end of 1996, 80 per cent of Fortune 500 firms would have a website.

In 1996, when 85 per cent of the on-line advertisements were computer or high-tech-oriented, no one I know predicted that 80 per cent of would be aimed at the general consumer market in 1997. In 1995, no one that I know foresaw that investors would be managing over $100,000 million in on-line investments in 1997.

Three years ago, no one predicted that "real audio" would be audio to the Net in '95 or video to the Net in '96, or that in '97 "Real Network" would for the first time deliver audio and video to broadcast-size audiences over the Net.

The value of the Internet as the medium for electronic commerce is no longer in doubt. Forrester Research estimates a $327,000 million value for goods and services traded over the Internet within the next five years. A study by International Data Corp. found that almost half (46.4 per cent) of us companies are planning to, or already offer their customers the opportunity to purchase their products over the Internet.

Already Internet users have generated a software and services market predicted to bring in $12,200 million in revenue in 1997, up 60 per cent from $7,500 million 1996. input , a technology market intelligence firm, is forecasting that worldwide sales of goods and services through cd-rom catalogues, on-line storefronts, and Internet malls will grow from $700 million in 1995 to $230,000 million by 2000, a compound growth rate of more than 200 per cent.

Governments must respect the unique nature of networked communications and recognise that widespread competition and increased consumer choice -- rather than heavy-handed regulation -- should be the defining features of a new digital marketplace.

Some regulatory efforts are driven by fear -- a fear that these new technologies will overwhelm us. And frankly, some regulation is driven by envy -- some governments are concerned that the United States is and will dominate the governance of and content on the Web.

But surely for this last concern, the way to address the concern is through increased development of other nations own content and promotion of the Net, not by permitting or encouraging onerous or ill-conceived laws or regulations.

We should always be wary of the burdensome nature of regulation. I was reminded of this upon seeing the following statistics in a recent article in the National Review: "The Lord's Prayer is 66 words, the Gettysburg Address is 286 words, there are 1,322 words in the Declaration of Independence, but government regulations on the sale of cabbage total 26,911 words."

Those who understand where we want to go with electronic commerce most certainly know that governments need to exercise self-control and resist the urge to regulate.

The Clinton Administration is concerned about some nations' attempt to regulate the Net, whether it takes the form of censoring content (Singapore, China), banning Internet telephony (the Czech Republic), or imposing new taxes. Of course, even we have experienced moments of weakness -- in the United States, the courts have helped us when we have strayed into areas of regulation.

Forbearing from regulating does not mean that there are no appropriate roles for the government. There are several extremely important activities that the government can and should do to promote electronic commerce and the growth of the Internet.

First, governments should create a favourable climate for investments. We must push forward on efforts to liberalise markets.

We must realise the promise of the Telecom Act of 1996. And implementation of the wto (World Trade Organisation) agreements on basic telecom services and information technology is critical. Together, liberalisation and increased private investment will result in more ubiquitous networks, which in turn will drive technology and its applications into the workplace and the home.

Second, governments should act to prevent fraud on the Net. Consumers need protection in the virtual world just as they do in the physical one.

This does not necessarily mean new laws; but certainly will require vigorous enforcement of existing laws.

The present's call for ensuring that the Net is a tariff-free zone is right on target. The Net will suffer from a patchwork set of taxes at the local and national level, that become unduly burdensome.

Fourth, governments should work with and encourage industry to provide technology tools to protect children from having access to material on the Net that their parents or guardian deem to be inappropriate.

Fifth, governments should provide government services over the Net.

These services can range from obtaining licenses to complying with zoning ordinances. The Clinton administration has made it a priority that Federal agencies do more in this area, and as a result, the Federal government presently provides a tremendous amount of information electronically, from disaster relief forms to grant applications to procurement requirements. Still, a lot more can be accomplished in this area.

Sixth, we must protect intellectual property rights, so that music, movies, and art are available, but the piracy that already robs them of nearly $11,000 million in earnings does not explode in a global electronic market place.

Seventh, governments should work with industry to ensure privacy in the networked environment so that people are comfortable doing business in this electronic market place.

The private sector has done much in the way of meaningful, consumer-friendly, self-regulated privacy administration, and we believe this is the right way to address this issue.

Finally, there is a valuable role for governments to play in helping to ensure that all segments of society benefit from the emerging telecommunications and information technologies and applications.

Anecdotes provide a powerful rationale for extending the Net to underdeveloped regions.

For instance, in 1995 the United Nations International Fund for Agricultural Development launched the Fid Americ communications network in an effort to eliminate repeated mistakes in agricultural development projects and to disseminate practical information throughout 17 countries in Latin America and the Caribbean.

The network has provided an electronic forum for an Amazon village chief to explain to development workers how his community negotiated a contract with the Body Shop stores to sell essential oils. It has allowed Chilean farmers to advertise and sell their oversupply of potatoes. And it has enabled a Dominican farmer to answer a Guatemalan's irrigation query.

At television newscaster Tom Brokaw said in a speech to the graduating class at Connecticut's Fairfield University, "It's easy to make a buck but hard to make a difference." Our challenge is to use these technologies to do well and to do good.