There is something exceptional about the rise in world food prices this year. Prices of several food items including cereals and oilseeds have risen by more than 100 per cent in less than a year. The situation has been compounded by the rise in prices of one of the key inputs of modern agriculture fertilizers. These are essentially of three types nitrogenous, and potash and phosphate groups.

A few figures illustrate the cataclysmic nature of the recent rise in fertilizer prices. The website of Potash Corp, a leading fertilizer producer based in Canada, shows that price of potassium chloride has risen from us $170 to over us $500 in a year.Canpotex, a Canadian company which markets potash fertilizers for Potash Corp and other Canadian fertilizer companies, negotiated a new contract in April that involves China paying us $576/tonne. A year ago the country paid us $176 for a tonne of the fertilizer.

The price of the main input for phosphorous fertilizers, rock phosphate, has reached us $367/tonne, almost 700 per cent of what it was a year back. On May 20, China, amongst the largest suppliers of phosphorus, raised the export duty on the fertilizer from 20 per cent to 120 per cent.

Let us now place this price rise in perspective. Fertilizers have played a big role in increasing yields of food crops to feed the world's rising population. Fertilizers have also assumed importance because soil productivity throughout the world has depleted because of degradation and over exploitation. But fertilizer production has not been able to keep pace with rising demand. So prices have hit the roof.

The shortfall of nitrogenous varieties of fertilizers can be overcome the fastest. Urea production, for example, requires natural gas and production facilities are widely dispersed. There are several big new plants coming up this year two in Iran and one each in Russia, Nigeria, Oman and Egypt.

However, the situation is not as comfortable when it comes to the other two major fertilizer groups, potash and phosphates. Potash production is an oligopoly with top five players producing 70 per cent of the world's production. Potash Corp is the largest producer of this fertilizer variety. It is also the third largest phosphate producer and second largest nitrogen producer.

Share prices of the company have risen from around us $25, three years ago, to us $200. Share prices of another Canadian potash producer, Mosaic, has risen from us $38 a year ago to us $118. The success of these companies owes a lot to the skewed distribution of the world's potash reserves. Canada and Russia account for more than 70 per cent of the reserves of this fertilizer variety. So it's tough for companies outside these countries to expand capacities. The us is known to have a lot of potash reserves, but they are at a depth of 1-2 km--not economical for mining. 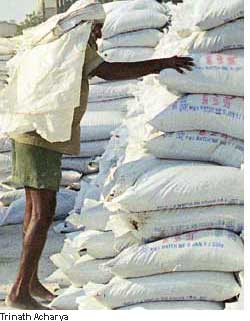 It is expected that the potash shortage will persist for at least the next 4-5 years with the demand for potash expected between 3.5-5 per cent in this period.

Phosphate production is also controlled by an oligopoly with the leader, Mosaic, accounting for 16 per cent of the world's total output. But the phosphate scenario is much more perilous than potash. We might be looking at a depletion of the world's phosphate reserves. Production has hovered around the 140 million mark in the past 5-6 years. If the current consumption rate is maintained then the world's phosphate might last for more than a century. However, if we assume a growth rate of 2 per cent, reasonable considering the current situation, the reserves will not last beyond 50 years. In fact phosphate reserves might even run out much earlier given the current thrust on corn production for biofuel. Corn farming is phosphate intensive.

To prevent further shortages, impetus needs to be given to research on crops which require less fertilizer. The traditional practice of using manure, produced from human and animal excreta besides dead leaves and plant should be revived. The practice of terra petra can also be promoted. The practice involves mixing charcoal in soil. Charcoal binds micronutrients and prevents their run off.

Anmol Shetty is with the Indian Institute of Management, Ahmedabad